Sorgenfri Palace (Danish: Sorgenfri Slot; lit. "carefree", like Sans Souci) is a royal residence of the Danish monarch, located in the Lyngby-Taarbæk municipality in Greater Copenhagen.

Nowadays the palace is closed to the public but the palace gardens are always accessible.

Sorgenfri Palace seen from the park, 2014 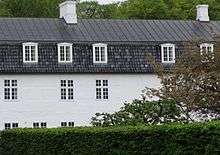 Originally a country seat, Sorgenfri Palace was built for the Danish nobleman Count Carl Ahlefeldt in 1705-06. The palace first became a royal residence in 1730 after coming into the possession of the Danish Royal Family.

Crown Prince Frederick (later King Frederick V of Denmark) appointed the royal architect Lauritz de Thurah (noted also for his remodelling and expansion of Hirschholm Palace) to construct a wing for the gentlemen of the Court.

Upon his accession to the throne, Frederick gave the residence to his aunt Sophie Caroline, Dowager Princess of East Frisia. The Princess instructed de Thurah to demolish the palace in 1756 to make way for a new palace.[1][2]

Between 1791-94 Prince Frederick, brother to Christian VII of Denmark, created the present neoclassical facade of the palace. The characteristic cupola also dates from this time.

Sorgenfri was the preferred summer residence of King Christian X and his wife Queen Alexandrine. Both of Alexandrine's children Frederick and Knud, were born there. Both Knud and his wife Caroline-Mathilde lived at Sorgenfri Palace until their respective deaths in 1976 and 1995.

From 1991, Count Christian of Rosenborg, a first cousin of Margrethe II, and Countess Anne Dorte lived in a detached wing of the palace called Damebygningen until they died in 2013 and 2014, respectively.[3] 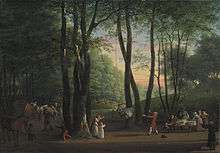 The palace is located in a 40 hectares (99 acres) garden, which was originally made in Baroque style in 1706. Prince Frederick had this changed to an English landscape garden style between 1791 and 1794. The line of lime trees in front of the palace is still a trace of the baroque style garden.

Architect Nicolai Abildgaard was responsible for the garden pavilions The Swiss House and The Norwegian House.

The Mølleåen river runs through the park on the east side.

A memorial bench for poet Viggo Stuckenberg and a memorial stone for women's rights activist Gyrithe Lemche are also located in the park.