This article is about the Russian philosopher. For others with the same name, see Vladimir Solovyov.

Vladimir Sergeyevich Solovyov[1] (Russian: Влади́мир Серге́евич Соловьёв; January 28 [O.S. January 16] 1853 – August 13 [O.S. July 31] 1900) was a Russian philosopher, theologian, poet, pamphleteer and literary critic. He played a significant role in the development of Russian philosophy and poetry at the end of the 19th century and in the spiritual renaissance of the early 20th century.

The son of the historian Sergey Mikhaylovich Solovyov (1820–1879), and the brother of historical novelist Vsevolod Solovyov (1849-1903), he was born in Moscow.[2] His mother Polyxena Vladimirovna belonged to a Polish origin family and had, among her ancestors, the thinker Gregory Skovoroda (1722–1794).[3]

In his teens, Solovyov renounced Eastern Orthodoxy for nihilism, but later, his disapproval of positivism[4] saw him begin to express views that were line with those of the Orthodox Church.[4] Solovyov studied at the University of Moscow, and his philosophy professor was Pamfil Yurkevich.[5]

In his The Crisis of Western Philosophy: Against the Positivists, Solovyov discredited the positivists' rejection of Aristotle's essentialism, or philosophical realism. In Against the Postivists, he took the position of intuitive noetic comprehension, or insight. He saw consciousness as integral (see the Russian term sobornost)and requiring both phenomenon (validated by dianonia) and noumenon validated intuitively.[4] Positivism, according to Solovyov, validates only the phenomenon of an object, denying the intuitive reality that people experience as part of their consciousness.[4] As Solovyov's basic philosophy rests on the idea that the essence of an object (see essentialism) can be validated only by intuition and that consciousness as a single organic whole is done in part by reason or logic but in completeness by (non-dualist) intuition. Soloyvev was partially attempting to reconcile the dualism (subject-object) found in German idealism.

Vladimir Solovyov became a friend and confidant of Fyodor Dostoyevsky (1821-1881). In opposition to his friend, Solovyov was sympathetic to the Roman Catholic Church. He favored the healing of the schism (ecumenism, sobornost) between the Orthodox and Roman Catholic Churches. It is clear from Solovyov's work that he accepted papal primacy over the Universal Church,[6][7][8] but there is not enough evidence, at this time, to support the claim that he ever officially embraced Roman Catholicism. However, on February the 18th 1896, He was received into the Catholic Church.[9]

A vigorous anti-Asian racist, Solovyov spent his last years obsessed with the fear of the "Yellow Peril", constantly warning that soon the Asian peoples, especially the Chinese, would invade and destroy Russia.[10] In a 1890 article entitled "China and Europe", in the journal Review, Solovyov wrote that the great struggle of the coming 20th century would be a war between China which was "yellow", "pagan" and completely "evil" vs. the Europe which was "white", "Christian" and completely "good".[10] After the victories of the Japanese during the First Sino-Japanese war in 1894-95, Solovyov added Japan to the list of Asian nations that were allegedly menacing Russia.[10] Solovyov's fear of Asians was most vividly expressed in his 1894 poem Pan-Mongolism, where he wrote: "From the Altai to Malaysian shores The leaders of Eastern isles Have gathered a host of regiments By China’s defeated walls. Countless as locusts And as ravenous, Shielded by an unearthly power The tribes move north. O Rus’! Forget your former glory: The two-headed eagle is ravaged, And your tattered banners passed Like toys among yellow children. He who neglects love’s legacy, Will be overcome by trembling fear ... And the third Rome will fall to dust, Nor will there ever be a fourth."[10] The Third Rome of the poem was Russia, which claimed to be the successor of the Eastern Roman Empire whose emblem of a two-headed black eagle was also adopted as the symbol of the Russian state. The Rus were the Viking tribe that founded the first Russian state in the 9th century, and the term Rus is an archaic, poetical name for Russia.

Solovyov further elaborated on the "Yellow Peril" in his apocalyptic short story "Tale of the Antichrist" published in the Nedelya newspaper on 27 February 1900, where China and Japan join forces to conquer Russia.[11] Solovyov began his story with the epigraph: "Pan Mongolism! The name is monstrous Yet it caresses my ear As if filled with the portent Of a grand divine fate".[11] In his story, the Japanese, after having adopted modern technology following the Meiji Restoration, teach the Chinese modern science and technology, after which a combined Sino-Japanese army conquers Europe.[12] After a long era of occupation, the Europeans rise up, defeat and kill all of the Asians and then establish a "United States of Europe", living together in peace and prosperity as the various European powers have all learned that their real enemy is the Asians, not each other.[12] The Boxer Rebellion in China was seen by many Russians as confirming the accuracy of Solovyov's anti-Asian writings and in the spring and summer of 1900 Solovyov was constantly interviewed by the Russian press about the "Yellow Peril".[13] In an interview shortly before his death in July 1900, Solovyov stated he was very worried about what was happening in China, expressed regret that the Europeans had not joined forces already to stop the "Yellow Peril" and urged that China be partitioned between the various European powers before it was too late.[14] Solovyov attacked those in the Russian intelligentsia who saw the British Empire as Russia's principle enemy and prompted the viewpoint that Russia was an Asian nation that should ally with China against Britain.[15] Solovyov insisted that Russia was a European power that should side with its traditional archenemy Britain against what he claimed was the menace of China.[16] Solovyov praised the German Emperor Wilhelm II for his Hunnenrede (Hun speech) calling for German troops be sent to China to behave like "Huns", saying the Kaiser was a "crusader, descendant of a sword-carrying host who in the face of the dragon's power understood that the sword and cross are one".[17] Solovyov expressed absolute agreement with Wilhelm, arguing that in face of the "Yellow Peril", only the most merciless violence could save the white race.[18]

Solovyov never married or had children, but he pursued idealized relationships as immortalized in his spiritual love poetry, including with two women named Sophia.[19] He rebuffed the advances of mystic Anna Schmidt, who claimed to be his divine partner.[20] 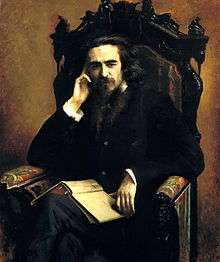 It is widely held that Solovyov was one of the sources for Dostoyevsky's characters Alyosha Karamazov and Ivan Karamazov in The Brothers Karamazov.[21] Solovyov's influence can also be seen in the writings of the Symbolist and Neo-Idealist writers of the later Russian Soviet era. His book The Meaning of Love can be seen as one of the philosophical sources of Leo Tolstoy's The Kreutzer Sonata (1889). It was also the work in which he introduced the concept of 'syzygy', to denote 'close union'.[22]

He influenced the religious philosophy of Nicolas Berdyaev, Sergey Bulgakov, Pavel Florensky, Nikolai Lossky, Semyon Frank, brothers Sergei Nikolaevich Trubetskoy and Evgenii Nikolaevich Trubetskoy, the ideas of Rudolf Steiner, and the poetry and theory of Russian Symbolists (Andrei Belyi, Alexander Blok, Solovyov's nephew, and others). Hans Urs von Balthasar explores his work as one example of seven lay styles, which reveal the glory of God's revelation, in volume III of The Glory of the Lord (pp. 279–352).

Solovyov compiled a philosophy based on Hellenistic philosophy (see Plato, Aristotle and Plotinus) and early Christian tradition with Buddhism and Hebrew Kabbalistic elements (Philo of Alexandria). He also studied Gnosticism and the works of the Gnostic Valentinus.[23] His religious philosophy was syncretic and fused philosophical elements of various religious traditions with Orthodox Christianity and his own experience of Sophia.

Solovyov described his encounters with the entity Sophia in his works, such as Three Encounters and Lectures on Godmanhood. His fusion was driven by the desire to reconcile and/or unite with Orthodox Christianity the various traditions by the Russian Slavophiles' concept of sobornost. His Russian religious philosophy had a very strong impact on the Russian Symbolist art movements of his time.[24] His teachings on Sophia, conceived as the merciful unifying feminine wisdom of God comparable to the Hebrew Shekinah or various goddess traditions,[25] have been deemed a heresy by Russian Orthodox Church Outside Russia and as unsound and unorthodox by the Patriarchate of Moscow.[26] 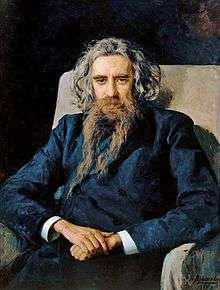 Solovyov sought to create a philosophy that could through his system of logic or reason reconcile all bodies of knowledge or disciplines of thought, and fuse all conflicting concepts into a single system. The central component of this complete philosophic reconciliation was the Russian Slavophile concept of sobornost (organic or spontaneous order through integration, which is related to the Russian word for 'catholic'). Solovyov sought to find and validate common ground, or where conflicts found common ground, and, by focusing on this common ground, to establish absolute unity and or integral[27] fusion of opposing ideas and/or peoples.[28]

Solovyov died at the Moscow estate of Nikolai Petrovitch Troubetzkoy, where a relative of the latter, Sergei Nikolaevich Trubetskoy, was living. Solovyov was apparently a homeless pauper in 1900. He left his brother, Mikhail Sergeevich, and several colleagues to defend and promote his intellectual legacy. He is buried at Novodevichy Convent.

"As long as the dark foundation of our nature, grim in its all-encompassing egoism, mad in its drive to make that egoism into reality, to devour everything and to define everything by itself, as long as that foundation is visible, as long as this truly original sin exists within us, we have no business here and there is no logical answer to our existence. Imagine a group of people who are all blind, deaf and slightly demented and suddenly someone in the crowd asks, "What are we to do?"... The only possible answer is "Look for a cure". Until you are cured, there is nothing you can do. And since you don't believe you are sick, there can be no cure."

"But if the faith communicated by the Church to Christian humanity is a living faith, and if the grace of the sacraments is an effectual grace, the resultant union of the divine and the human cannot be limited to the special domain of religion, but must extend to all Man's common relationships and must regenerate and transform his social and political life."[29]