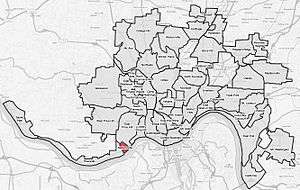 Sedamsville is a neighborhood of Cincinnati, Ohio. 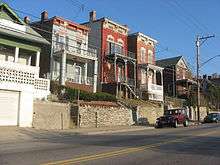 Houses on River Road in Sedamsville

Sedamsville was established in 1795 by Colonel Cornelius Sedam, a veteran of the Revolutionary War, who moved to the area to assist in the building of Fort Washington. A town of mostly German immigrants, Sedamsville was once one of the most recognized wine producing territories in the country. The Industrial Revolution changed the landscape bringing commerce and large factories to the area along with a new influx of residents. Unfortunately the Great Depression saw many of those businesses close their doors, and then the disastrous flood of 1937 made it impossible for many to rebuild. Many more buildings were destroyed with the widening of River Road in the 1940s which nearly wiped out the business district completely. 91 buildings were razed and 100 families displaced.

Sadly, with the closing of Our Lady of Perpetual Help Church, the neighborhood began to deteriorate. With help from the Cincinnati Preservation Association, many historic buildings have been saved from demolition. Nearly the whole town is now listed on the National Registry of Historical places.

Although Sedamsville is far from the prosperous manufacturing hub it once was, it is still home to many prominent small and large businesses. Sedamsville is surrounded by many resources. The town is located on one of the busiest waterways in the country, the Ohio River. The extensive CSX railway is nearby. The scenic by-way of State Route 50 is the main thoroughfare. Sedamsville is on the Metro bus line. There are many parks to enjoy including Embschoff, Mt. Echo, and Boldface Park (named after Chief Boldface of the Native Americans who were the first residents).

Baseball legend Pete Rose, the “Hit King” of the Cincinnati Reds, learned the game playing little league at BoldFace Park in Sedamsville. Rose played Major League Baseball for the Cincinnati Reds from 1963 to 1986 and managed the Big Red Machine from 1984 to 1989.

The Sedamsville Rectory is listed on the National Historic registry and the Travel Channel’s list of most haunted places in America. It has been featured on several paranormal TV shows including Ghost Adventures, Haunted Collector and My Ghost Story.

The Sedamsville Community Development Corporation (SCDC) provided the historical account above and was organized to take up the battle to revive and revitalize Sedamsville. They work in association with the Sedamsville Civic Association and other agencies in the area.