This article is about the Cincinnati neighborhood. For the Ohio-based band, see Over the Rhine (band).

The neighborhood's distinctive name comes from its builders and early residents, German immigrants of the mid-19th century. Many walked to work across bridges over the Miami and Erie Canal, which separated the area from downtown Cincinnati. The canal was nicknamed "the Rhine" in reference to the Rhine River in Germany, and the newly settled area north of the canal as "Over the Rhine."[3][4] In German, the district was called "über dem Rhein."

An early reference to the canal as "the Rhine" appears in the 1853 book White, Red, Black, in which traveler Ferenc Pulszky wrote, "The Germans live all together across the Miami Canal, which is, therefore, here jocosely called the 'Rhine.' "[5] In 1875 writer Daniel J. Kenny referred to the area exclusively as "Over the Rhine." He noted, "Germans and Americans alike love to call the district 'Over the Rhine.' "[6] The canal was drained and capped by Central Parkway, the resulting tunnel was to be used for the now defunct Cincinnati Subway project.

Built in the nineteenth century during a period of extensive German immigration, Over-the-Rhine changed as many white residents moved to the suburbs following World War 2, also known as "white flight". They were replaced by African Americans who came to the city in the Great Migration. The city and area had lost many of the industrial jobs which once supported its workers. By the end of the century, the area was notable for the poverty of remaining residents. In this time period residents united an created many life-saving organizations. The community was strong and accepting.[3] 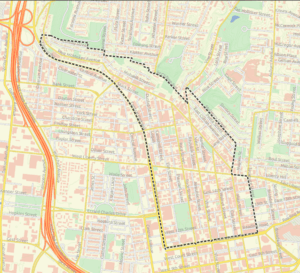 Over-the-Rhine and its surroundings

In recent years developers have renamed this portion of Over-the-Rhine to "The Gateway Quarter". This area has been the focal point of gentrification, which has been controversial due to the displacement of African Americans and low income residents. A comparison of the 2010 and 2000 federal censuses shows that over 1000 African Americans left this area during the decade. As of 2016, this is a primarily white, wealthy and exclusive section of the neighborhood.[9]

This area of the neighborhood has been relatively untouched by recent gentrification efforts and may resemble historic OTR better than other areas, though future investment may change this space in the future.[13]

Until 1849, today's Liberty Street, then called Northern Row, was the corporation line forming Cincinnati's northern boundary. The area north of Northern Row was not subject to municipal law and was, appropriately, called 'The Northern Liberties'. In 1955, the city decided to widen Liberty Street to connect with Reading Road as an east-west cross town access point for the interstate highway system. Buildings on the south side of the street were demolished and the street was widened from a two lane road to one with five lanes. Efforts are underway to narrow Liberty Street to bridge the gap between these halves of the neighborhood.[14]

Over-the-Rhine has been praised for its collection of historic architecture. The New York Times described the neighborhood as having "a scale and grace reminiscent of Greenwich Village in New York."[15] Its architectural significance has also been compared to the French Quarter in New Orleans and the historic districts of Savannah, Georgia and Charleston, South Carolina.[15][16] When Arthur Frommer, founder of the Frommer's travel guides, visited Over-the-Rhine he described it as the most promising urban area for revitalization in the United States, and claimed that its potential for tourism "literally could rival similar prosperous and heavily visited areas."[17][18]

Most of Over-the-Rhine's ornate brick buildings were built by German immigrants from 1865 to the 1880s.[15] The architecture of Over-the-Rhine reflects the diverse styles of the late nineteenth century—simple vernacular, muted Greek Revival, Italianate and Queen Anne.[19] Most of the buildings in Over-the-Rhine are one of these styles, but there are other odd balls as well. Art Deco is represented by the American Building on Central Parkway, the Germania Building at Twelfth and Walnut streets is ironically one of the few examples of German ornamentation in the neighborhood, Music Hall's mixture of styles is best described as Venetian Gothic, there are a handful of buildings with Gothic architecture, and the new SCPA on Central Parkway is the most notable example of Modern architecture in the neighborhood.[2]

In 2011, the Over-the-Rhine Foundation, which works to prevent historic building loss in OTR, won 3rd place in the National Trust for Historic Preservation's nationwide This Place Matters community challenge.[20] In 2006, the National Trust for Historic Preservation has listed the status of Over-the-Rhine as "Endangered."[19] Since 1930, approximately half of Over-the-Rhine's historic buildings have been destroyed.[17] More will follow unless currently deteriorating buildings are repaired.[19] Between 2001 and 2006, the city approved more than 50 "emergency demolitions," which were caused by absentee landlords' allowing their buildings to become so critically dilapidated that the city declared them a danger to the public. Reinvestment could have saved them.[17][21] Due to the situation, the National Trust for Historic Preservation declared Over-the-Rhine one of Eleven Most Endangered Historic Places in 2006.[19] Over-the-Rhine was included in the 2008 book, Frommer's 500 Places to See Before They Disappear, which noted the district's "shocking state of neglect".[22]

According to research conducted by WCPO in 2001, some of the worst-kept properties are owned by Over-the-Rhine's non-profits,[23] which let the buildings sit vacant and deteriorating because of lack of funds [24] or volunteers.[25] With some buildings on the verge of collapse, investors and real-estate developers are trying to restore them before deterioration to the point of requiring demolition.[15] According to the U.S. Census Bureau, part of Over-the-Rhine has one of the highest rates of abandoned and vacant homes in the country. They classify it as the sixth hardest area in the nation to get an accurate population count.[26] 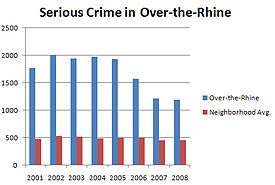 The amount of serious crime in Over-the-Rhine (blue) has decreased since 2006, but crime still remains higher than the citywide neighborhood average (red).

The number of serious crimes committed in OTR has decreased significantly in recent years but still remains significantly higher than the citywide average.

In 2001 there were an estimated 500 vacant buildings in Over-the-Rhine with 2,500 residential units.[13] Of those residential units 278 were condemned as uninhabitable.[13] Also in 2001 the owner-occupancy rate was between 3 and 4 percent compared to the city-wide rate of 39 percent.[13] According to the "Drilldown", a comprehensive analysis of the city's actual population and demographics conducted in 2007, OTR's current population was just 4,970 people.[29] As of the census[30] of 2000, the racial makeup of Over-the-Rhine was 19.4% White, 76.9% African American, and less than 4% of other races. 0.6% of the population were Hispanic or Latino of any race.

The neighborhood's residents comprise roughly 1.2% of the population of the City of Cincinnati.

Over-the-Rhine is home to several distinctive annual events. A few of them are:

Most of Over-the-Rhine's landmarks are related to the arts and are clustered in one area near Downtown. 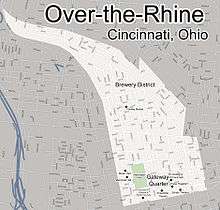