This article is about the Japanese military rank and historical title. For other uses, see Shogun (disambiguation). 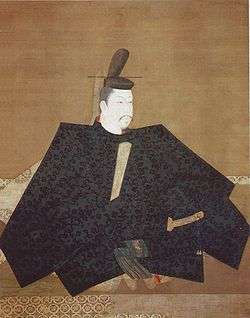 Minamoto no Yoritomo, the first shogun (1192–1199) of the Kamakura shogunate

A shogun (将軍, shōgun, [ɕoːɡu͍ɴ]) was a military dictator in Japan during the period from 1185 to 1868 (with exceptions). In this period, the shoguns were the de facto rulers of the country; although nominally they were appointed by the Emperor as a ceremonial formality.[1] The Shogun held almost absolute power over territories through military means, in contrast to the concept of a colonial governor in Western culture. Nevertheless, an unusual situation occurred in the Kamakura period (1199–1333) upon the death of the first shogun, whereby the Hōjō clan's hereditary titles of shikken (1199-1256) and tokusō (1256–1333) monopolized the shogunate as dictatorial positions, collectively known as the Regent Rule (執権政治).[2] The shogun during this 134-year period met the same fate as the Emperor and was reduced to a figurehead until a coup in 1333, when the Shogun was restored to power in the name of the Emperor.[2]

The modern rank of shogun is roughly equivalent to a generalissimo. Shogun is the short form of Sei-i Taishōgun (征夷大将軍, "Commander-in-Chief of the Expeditionary Force Against the Barbarians"), the individual governing the country at various times in the history of Japan, ending when Tokugawa Yoshinobu relinquished the office to Emperor Meiji in 1867.[3]

A shogun's office or administration is the shogunate, known in Japanese as the bakufu (幕府, "tent office/government"), which originally referred to the house of the general and later also suggested a private government under a shogun.[4] The tent symbolized the field commander but also denoted that such an office was meant to be temporary. The shogun's officials were collectively the bakufu, and were those who carried out the actual duties of administration, while the imperial court retained only nominal authority.[5] In this context, the office of the shogun had a status equivalent to that of a viceroy or governor-general, but in reality shoguns dictated orders to everyone including the reigning Emperor.

Originally, the title of Sei-i Taishōgun ("Commander-in-Chief of the Expeditionary Force Against the Barbarians")[6] was given to military commanders during the early Heian period for the duration of military campaigns against the Emishi, who resisted the governance of the Kyoto-based imperial court. Ōtomo no Otomaro was the first Sei-i Taishōgun.[7] The most famous of these shoguns was Sakanoue no Tamuramaro, who conquered the Emishi in the name of Emperor Kanmu. Eventually, the title was abandoned in the later Heian period after the Ainu had been either subjugated or driven to Hokkaidō.

In the later Heian period, one more shogun was appointed. Minamoto no Yoshinaka was named sei-i taishōgun during the Genpei War, only to be killed shortly thereafter by Minamoto no Yoshitsune.

In the early 11th century, daimyo protected by samurai came to dominate internal Japanese politics.[3] Two of the most powerful families – the Taira and Minamoto – fought for control over the declining imperial court. The Taira family seized control from 1160 to 1185, but was defeated by the Minamoto in the Battle of Dan-no-ura. Minamoto no Yoritomo seized power from the central government and aristocracy and established a feudal system based in Kamakura in which the private military, the samurai, gained some political powers while the Emperor and the aristocracy remained the de jure rulers. In 1192, Yoritomo was awarded the title of Sei-i Taishōgun by the Emperor and the political system he developed with a succession of shogun as the head became known as a shogunate. Yoritomo's wife's family, the Hōjō, seized power from the Kamakura shoguns. When Yoritomo's sons and heirs were assassinated, the shogun himself became a hereditary figurehead. Real power rested with the Hōjō regents. The Kamakura shogunate lasted for almost 150 years, from 1192 to 1333.

In 1274 and 1281, the Mongol Empire launched invasions against Japan. An attempt by Emperor Go-Daigo to restore imperial rule in the Kenmu Restoration in 1331 was unsuccessful, but weakened the shogunate significantly and led to its eventual downfall.[8]

The end of the Kamakura shogunate came when Kamakura fell in 1333, and the Hōjō Regency was destroyed. Two imperial families – the senior Northern Court and the junior Southern Court – had a claim to the throne. The problem was solved with the intercession of the Kamakura Shogunate, who had the two lines alternate. This lasted until 1331, when Emperor Go-Daigo (of the Southern Court) tried to overthrow the shogunate in order to stop the alternation. As a result, Daigo was exiled. Around 1334–1336, Ashikaga Takauji helped Daigo regain his throne.[9]

The fight against the shogunate left the Emperor with too many people claiming a limited supply of land. Takauji turned against the Emperor when the discontent about the distribution of land grew great enough. In 1336 Daigo was banished again, in favor of a new Emperor.[9]

During the Kemmu Restoration, after the fall of the Kamakura shogunate in 1333, another short-lived shogun arose. Prince Moriyoshi (Morinaga), son of Go-Daigo, was awarded the title of Sei-i Taishōgun. However, Prince Moriyoshi was later put under house arrest and, in 1335, killed by Ashikaga Tadayoshi. 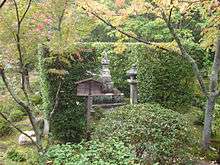 In 1338, Ashikaga Takauji, like Yoritomo, a descendant of the Minamoto princes, was awarded the title of sei-i taishōgun and established the Ashikaga shogunate, which lasted until 1573. The Ashikaga had their headquarters in the Muromachi district of Kyoto, and the time during which they ruled is also known as the Muromachi Period. 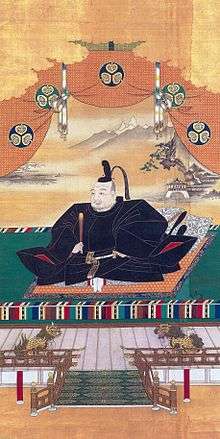 Tokugawa Ieyasu seized power and established a government at Edo (now known as Tokyo) in 1600. He received the title sei-i taishōgun in 1603, after he forged a family tree to show he was of Minamoto descent.[10] The Tokugawa shogunate lasted until 1867, when Tokugawa Yoshinobu resigned as shogun and abdicated his authority to Emperor Meiji.[11]

During the Edo period, effective power rested with the Tokugawa shogun, not the Emperor in Kyoto, even though the former ostensibly owed his position to the latter. The shogun controlled foreign policy, the military, and feudal patronage. The role of the Emperor was ceremonial, similar to the position of the Japanese monarchy after the Second World War.[12]

Today, the head of the Japanese government is the Prime Minister; the usage of the term "shogun" has nevertheless continued in colloquialisms. A retired Prime Minister who still wields considerable power and influence behind the scenes is called a "shadow shogun" (闇将軍, yami shōgun), a sort of modern incarnation of the cloistered rule. Examples of "shadow shoguns" are former Prime Minister Kakuei Tanaka and the politician Ichirō Ozawa.[13]

The term bakufu (literally, tent government) originally meant the dwelling and household of a shogun, but in time, became a metonym for the system of government of a feudal military dictatorship, exercised in the name of the shogun or by the Shogun himself. Therefore, various bakufu held absolute power over the country (territory ruled at that time) without pause from 1192 to 1867, glossing over actual power, clan and title transfers.

The shogunate system was originally established under the Kamakura shogunate by Minamoto no Yoritomo. Although theoretically, the state (and therefore the Emperor) held ownership of all land in Japan. The system had some feudal elements, with lesser territorial lords pledging their allegiance to greater ones. Samurai were rewarded for their loyalty with agricultural surplus, usually rice, or labor services from peasants. In contrast to European feudal knights, samurai were not landowners.[14] The hierarchy that held this system of government together was reinforced by close ties of loyalty between the daimyo, samurai and their subordinates.

Each shogunate was dynamic, not static. Power was constantly shifting and authority was often ambiguous. The study of the ebbs and flows in this complex history continues to occupy the attention of scholars. Each shogunate encountered competition. Sources of competition included the Emperor and the court aristocracy, the remnants of the imperial governmental systems, the shōen system, the great temples and shrines, the shugo and jitō, the kokujin and early modern daimyo. Each shogunate reflected the necessity of new ways of balancing the changing requirements of central and regional authorities.[15]