This article is about the generalized theorem. For the classical theorem, see Kelvin–Stokes theorem.
For the equation governing viscous drag in fluids, see Stokes' law.

This modern form of Stokes' theorem is a vast generalization of a classical result. Lord Kelvin communicated it to George Stokes in a letter dated July 2, 1850.[1][2][3] Stokes set the theorem as a question on the 1854 Smith's Prize exam, which led to the result bearing his name, even though it was actually first published by Hermann Hankel in 1861.[3][4] This classical Kelvin–Stokes theorem relates the surface integral of the curl of a vector field F over a surface Σ in Euclidean three-space to the line integral of the vector field over its boundary ∂Σ:

This classical statement, along with the classical divergence theorem, the fundamental theorem of calculus, and Green's theorem are simply special cases of the general formulation stated above.

The fundamental theorem of calculus states that the integral of a function f over the interval [a, b] can be calculated by finding an antiderivative F of f:

Stokes' theorem is a vast generalization of this theorem in the following sense.

So the fundamental theorem reads:

Formulation for smooth manifolds with boundary

More generally, the integral of α over Ω is defined as follows: Let {ψi} be a partition of unity associated with a locally finite cover {Ui, φi} of (consistently oriented) coordinate charts, then define the integral

where each term in the sum is evaluated by pulling back to Rn as described above. This quantity is well-defined; that is, it does not depend on the choice of the coordinate charts, nor the partition of unity.

Stokes' theorem reads: If ω is an (n − 1)-form with compact support on Ω, and ∂Ω denotes the boundary of Ω with its induced orientation, then

Here d is the exterior derivative, which is defined using the manifold structure only. On the right-hand side, a circle is sometimes used within the integral sign to stress the fact that the (n − 1)-manifold ∂Ω is closed.[note 1] The right-hand side of the equation is often used to formulate integral laws; the left-hand side then leads to equivalent differential formulations (see below).

The theorem is often used in situations where Ω is an embedded oriented submanifold of some bigger manifold on which the form ω is defined.

Let M be a smooth manifold. A (smooth) singular k-simplex in M is defined as a smooth map from the standard simplex in Rk to M. The group Ck(M, Z) of singular k-chains on M is defined to be the free abelian group on the set of singular k-simplices in M. These groups, together with the boundary map, ∂, define a chain complex. The corresponding homology (resp. cohomology) group is isomorphic to the usual singular homology group Hk(M, Z) (resp. the singular cohomology group Hk(M, Z)), defined using continuous rather than smooth simplices in M.

On the other hand, the differential forms, with exterior derivative, d, as the connecting map, form a cochain complex, which defines the de Rham cohomology groups Hk
dR(M, R).

Differential k-forms can be integrated over a k-simplex in a natural way, by pulling back to Rk. Extending by linearity allows one to integrate over chains. This gives a linear map from the space of k-forms to the kth group of singular cochains, Ck(M, Z), the linear functionals on Ck(M, Z). In other words, a k-form ω defines a functional

De Rham's theorem shows that this homomorphism is in fact an isomorphism. So the converse to 1 and 2 above hold true. In other words, if {ci} are cycles generating the kth homology group, then for any corresponding real numbers, {ai}, there exist a closed form, ω, such that

and this form is unique up to exact forms.

To simplify these topological arguments, it is worthwhile to examine the underlying principle by considering an example for d = 2 dimensions. The essential idea can be understood by the diagram on the left, which shows that, in an oriented tiling of a manifold, the interior paths are traversed in opposite directions; their contributions to the path integral thus cancel each other pairwise. As a consequence, only the contribution from the boundary remains. It thus suffices to prove Stokes' theorem for sufficiently fine tilings (or, equivalently, simplices), which usually is not difficult. 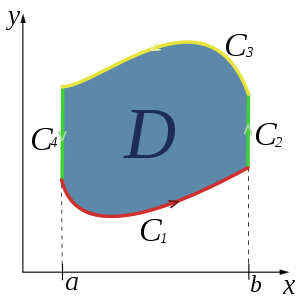 A region (here called D instead of Ω) with piecewise smooth boundary. This is a manifold with corners, so its boundary is not a smooth manifold.

The formulation above, in which Ω is a smooth manifold with boundary, does not suffice in many applications. For example, if the domain of integration is defined as the plane region between two x-coordinates and the graphs of two functions, it will often happen that the domain has corners. In such a case, the corner points mean that Ω is not a smooth manifold with boundary, and so the statement of Stokes' theorem given above does not apply. Nevertheless, it is possible to check that the conclusion of Stokes' theorem is still true. This is because Ω and its boundary are well-behaved away from a small set of points (a measure zero set).

A version of Stokes' theorem that extends to rough domains was proved by Whitney.[5] Assume that D is a connected bounded open subset of of Rn. Call D a standard domain if it satisfies the following property: There exists a subset P of ∂D, open in ∂D, whose complement in ∂D has Hausdorff (n − 1)-measure zero; and such that every point of P has a generalized normal vector. This is a vector v(x) such that, if a coordinate system is chosen so that v(x) is the first basis vector, then, in an open neighborhood around x, there exists a smooth function f(x2, …, xn) such that P is the graph { x1 = f(x2, …, xn) } and D is the region { x1 < f(x2, …, xn) }. Whitney remarks that the boundary of a standard domain is the union of a set of zero Hausdorff (n − 1)-measure and a finite or countable union of smooth (n − 1)-manifolds, each of which has the domain on only one side. He then proves that if D is a standard domain in Rn, ω is an (n − 1)-form which is defined, continuous, and bounded on D ∪ P, smooth on D, integrable on P, and such that dω is integrable on D, then Stokes' theorem holds, that is,

The study of measure-theoretic properties of rough sets leads to geometric measure theory. Even more general versions of Stokes' theorem have been proved by Federer and by Harrison.[6]

The general form of the Stokes theorem using differential forms is more powerful and easier to use than the special cases. The traditional versions can be formulated using Cartesian coordinates without the machinery of differential geometry, and thus are more accessible. Further, they are older and their names are more familiar as a result. The traditional forms are often considered more convenient by practicing scientists and engineers but the non-naturalness of the traditional formulation becomes apparent when using other coordinate systems, even familiar ones like spherical or cylindrical coordinates. There is potential for confusion in the way names are applied, and the use of dual formulations. 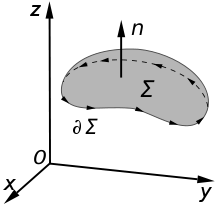 An illustration of the Kelvin–Stokes theorem, with surface Σ, its boundary ∂Σ and the "normal" vector n.

This is a (dualized) 1 + 1-dimensional case, for a 1-form (dualized because it is a statement about vector fields). This special case is often just referred to as the Stokes' theorem in many introductory university vector calculus courses and as used in physics and engineering. It is also sometimes known as the curl theorem.

which relates the surface integral of the curl of a vector field over a surface Σ in Euclidean three-space to the line integral of the vector field over its boundary, is a special case of the general Stokes theorem (with n = 2) once we identify a vector field with a 1-form using the metric on Euclidean 3-space. The curve of the line integral, ∂Σ, must have positive orientation, meaning that dr points counterclockwise when the surface normal, dΣ, points toward the viewer, following the right-hand rule.

One consequence of the Kelvin–Stokes theorem is that the field lines of a vector field with zero curl cannot be closed contours. The formula can be rewritten as:

where P, Q and R are the components of F.

These variants are rarely used:

Green's theorem is immediately recognizable as the third integrand of both sides in the integral in terms of P, Q, and R cited above.

Two of the four Maxwell equations involve curls of 3-D vector fields and their differential and integral forms are related by the Kelvin–Stokes theorem. Caution must be taken to avoid cases with moving boundaries: the partial time derivatives are intended to exclude such cases. If moving boundaries are included, interchange of integration and differentiation introduces terms related to boundary motion not included in the results below (see Differentiation under the integral sign):

The above listed subset of Maxwell's equations are valid for electromagnetic fields expressed in SI units. In other systems of units, such as CGS or Gaussian units, the scaling factors for the terms differ. For example, in Gaussian units, Faraday's law of induction and Ampère's law take the forms:[7][8]

respectively, where c is the speed of light in vacuum.

Likewise, the Ostrogradsky–Gauss theorem (also known as the divergence theorem or Gauss's theorem)

Since this holds for all c we find