Takushoku University (拓殖 大学; Takushoku Daigaku, abbreviated as 拓大 Takudai) is a private university in Japan. It was founded in 1900 by Duke Taro Katsura (1848–1913).[1] The university is located in Tokyo and has two campuses: the main campus in the Bunkyō district, and a satellite campus in the Hachiōji city. Takushoku University has five faculties: Commerce, Political Science and Economics, Foreign Languages, International Studies, and Engineering.[1]

Originally, Takushoku University was named the Taiwan Association School,[2] and was founded to produce graduates to contribute to the development of Taiwan. In 1907, it was renamed as the Oriental Association Vocational School.[2] In 1918, it adopted its present name of Takushoku University.[2] Literally, "Takushoku" means "development and industrialization" as well as "colonization", because Japan had overseas colonies like Taiwan, South Sakhalin, and Korea to industrialize at that time.

Takashoku University was the second best university in Japan, after Tokyo university, until the end of World War II. After the war, the university was dissolved by the GHQ due to its strong support for militarism. It was then renamed to Kōryō University (紅陵大学; Kōryō Daigaku) but has managed to change it back to its original name by undergoing various processes. 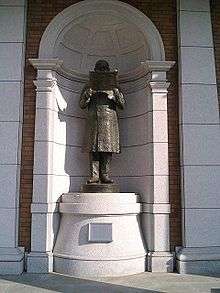 Takushoku University was responsible for training many of Japanese local and colonial administrators as well as overseas merchants. Several of these people who were also karateka (practitioners of karate) took up administrative positions in the Japan Karate Association when it was founded in 1949.[8] The university's karate club was founded around 1924,[9] and has produced many prominent karate instructors and competitors. The university also has a judo program, which produced a second-place result in a 1967 Japanese collegiate competition.[10]