Population trends in the Territoire-de-Belfort. Note that the scale on this chart is not linear. 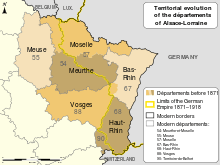 Territorial evolution of the departments in and around Alsace-Lorraine, showing the boundary of the 1871–1918 German Empire in yellow, separating the Territoire-de-Belfort (labelled 90) from the rest of Haut-Rhin (68)

The Territoire de Belfort (French pronunciation: ​[tɛ.ʁi.twaʁ də bɛl.fɔʁ]) is a department in the Bourgogne-Franche-Comté region of eastern France.

Its departmental code is 90, and its prefecture (capital) is Belfort. There is a single arrondissement (Belfort), which is sub-divided into 9 cantons and thence into 102 communes.

The administrative district Territoire de Belfort was created under the terms of the 1871 Treaty of Frankfurt. The German Empire annexed almost all of Alsace, but the French were able to negotiate retention of the Territoire de Belfort which thereby was separated from the rest of Alsace. There were three principal reasons for this exceptional treatment:

The Germans agreed primarily because the Prussian military officiers indicated that leaving it in France would give Germany a more defensible border.[1]

After retaining its unique status as a territoire for just over half a century, Belfort was officially recognizedd as France's 90th department in 1922. France had recovered Alsace three years earlier, but the decision was taken not to reintegrate Belfort into its former department. There was talk of giving it a new departmental name, with suggestions that included "Savoureuse" (after the main river of the new department) or "Mont-Terrible" (the name of a former Napoleonic department embracing parts of Switzerland), but there was no consensus for a name change and the department continues to be known as the Territoire de Belfort.

The departmental income of the department in 2008 had increased to €18 259 which was a little below the overall national figure. The averaged figure for the Territoire de Belfort masked relatively large disparities such as, in particular, that between Belfort itself at €15 431 and Bermont at €24 677.[2]

Four principal phases can be identified in the population trends during the two centuries between 1801 and 2000.

Geographers might contend that Belfort lies on the ridge that divides two regions of France, but before 1870 it was politically part of Alsace. However, in terms of the political regions established in 1982, the Territoire de Belfort has found itself in the Franche-Comté rather than Alsace.

The department has an area of only 609 km² (235 sq. miles), being the fifth smallest of France (after Paris and its suburbs Hauts-de-Seine, Seine-Saint-Denis, and Val-de-Marne).