For other uses, see Belfort (disambiguation).

Belfort [French pronunciation: ​[bɛl.fɔʁ]] is a city in northeastern France in the Bourgogne-Franche-Comté région, situated between Lyon and Strasbourg. It is the biggest town and the administrative town of the Territoire de Belfort département in the Bourgogne-Franche-Comté region. Belfort is 400 km (249 mi) from Paris, 141 km (88 mi) from Strasbourg, 290 km (180 mi) from Lyon and 150 km (93 mi) from Zürich. The residents of the city are called ‘’Belfortains’’. It is located on the Savoureuse, on the strategically important natural route between the Rhine and the Rhône – the Belfort Gap (Trouée de Belfort) or Burgundian Gate (Porte de Bourgogne). The city of Belfort has 50,199 inhabitants.[1] Together with its suburbs and satellite towns, Belfort forms the largest agglomeration (metropolitan area) in Bourgogne-Franche-Comté region with an urban population of 308,601 inhabitants.[2] 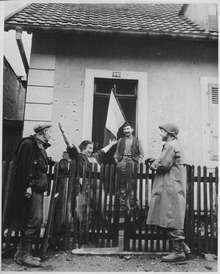 November 25, 1944: a French woman exclaims to a neighbor and to an American soldier: "Tout Belfort est libre" (All Belfort is liberated).

Belfort's strategic location, in a natural gap between the Vosges and the Jura, on a route linking the Rhine and the Rhône, has attracted human settlement and made it a target for armies.

The site of Belfort was inhabited in Gallo-Roman times and was subsequently recorded in the 13th century as a possession of the counts of Montbéliard, who granted it a charter in 1307.

Previously an Austrian possession, Belfort was transferred to France by the Treaty of Westphalia (1648), that ended the Thirty Years' War. The town's fortifications were extended and developed by the military architect Vauban for Louis XIV.

Until 1871, Belfort was part of the département of Haut-Rhin, in Alsace. The Siege of Belfort, between 3 November 1870 and 18 February 1871, was successfully resisted until the garrison was ordered to surrender 21 days after the armistice between France and Prussia. The region was not annexed by Prussia like the rest of Alsace and was exchanged for other territories in the vicinity of Metz. It formed, as it still does, the Territoire de Belfort. The siege is commemorated by a huge statue, the Lion of Belfort, by Frédéric Bartholdi.

Alsatians who sought a new French home in Belfort made a significant contribution to its industry (see Société Alsacienne de Constructions Mécaniques).

Belfort is a place with heavy industries, mostly dedicated to railway and turbines. Belfort is the hometown of Alstom where the first TGVs (Trains à Grande Vitesse, High Speed Trains) were produced. as well as being the GE Energy European headquarter and a centre of excellence for the manufacturing of gas turbines.

"All united for Belfort." Demonstration for Alstom against the deletion of 6,500 jobs. 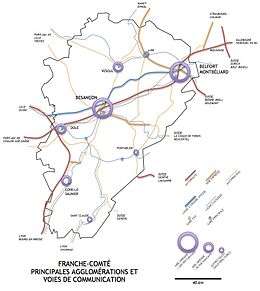 Belfort in the road and train network of Franche-Comté

Like many other European cities, motor traffic in Belfort increases continually and dominates transport.[3] Belfort is situated at only 25 mi (40 km) from the commercial port of Mulhouse-Rhin which allows international transit. Motorway A36 from Beaune to Mulhouse is routed around the south and east parts of the city. It forms the main axis linking Belfort to other French and foreign cities. A national road, N19, is another main road which joins the south of Belfort with Paris, Nancy and Switzerland.

EuroAirport Basel-Mulhouse-Freiburg is located about 60 km (37 mi) east of Belfort and takes an hour to drive. 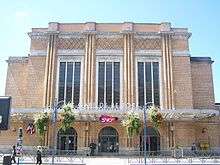 Belfort is well connected with the rest of France, major destinations such as Paris, Dijon, Besançon, Mulhouse, Strasbourg, Lyon, Marseille, Montpellier and Lille being directly possible by train., including high-speed trains. Some trains operate into Switzerland, such as Basel and Zürich stations. There is also a train service to Frankfurt am Main in Germany.

After 2015, regional trains will connect Belfort with Belfort-Montbéliard TGV station using the new Belfort–Delle railway link. This service will open Belfort and its area to Switzerland and Swiss towns like Delémont, Bern, Fribourg and Lausanne will be connected to Paris and other cities by the high-speed train net.[4] Before 2020, the service Épinal-Belfort will be electrified and modernized. This will allow a link between LGV Est and LGV Rhin-Rhône in Belfort-Montbéliard TGV station, opening new destinations like Nancy, Metz and Luxembourg.[5] 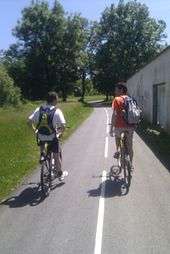 A local bus network operates within the city. The name of service is Optymo. You can find the updated details in the following site. www.optymo.fr. Tickets can be bought from any newsagent in the city. Alternatively, a user can send a sms 'BUS' to 84100 and show the confirmation sms as a ticket.

The region of Belfort already has cycling tracks of around 70 km (43 mi) and still more are under construction. Visit tourisme office for the latest cycle tracks. Coulée verte in the west, malsaucy-giromany in the north and the Euro Velo6 is just around 20 km (12 mi) to the south. Numerous cycling events are organised,enabling people to explore the area in the company of an official guide. 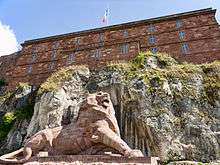 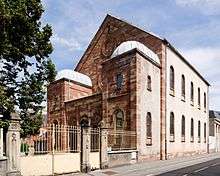 The Belfort Synagogue erected in 1857.

Belfort is also well known for hosting the annual Festival International de Musique Universitaire (FIMU) held in May each year.[7] FIMU usually involves over 250 concerts at different locations around the city and around 2500 musicians, most of them students or amateur groups from countries across Europe and the rest of the world. Music styles performed are extremely diverse and include traditional, folk, rock, jazz, classical and experimental.

Belfort was the birthplace of:

Belfort is twinned with:[8]