Canada's contemporary theatre reflects a rich diversity of regional and cultural identities.[1] Since the late 1960s, there has been a concerted effort to develop the voice of the 'Canadian playwright', which is reflected in the nationally-focused programming of many of the country's theatres.[2][3] Within this 'Canadian voice' are a plurality of perspectives - that of the First Nations, new immigrants, French Canadians, sexual minorities, etc. - and a multitude of theatre companies have been created to specifically service and support these voices.[4][5]

The Annapolis Basin in Nova Scotia served as the cradle for both French and English language theatre in Canada.[6] Théâtre de Neptune was the first European theatre production in North America. The tradition of English theatre in Canada, also started at Annapolis Royal. The tradition at Fort Anne, Nova Scotia, was to produce a play in honour of the Prince of Wales's birthday. Prior to Paul Mascarene's productions, the Boston Gazette (4–11 June 1733) reported that George Farquhar's The Recruiting Officer was produced on Saturday, 20 January 1733 by the officers of the garrison to mark the Prince's birthday.

Paul Mascarene translated Molière's La Misanthrope and then staged at least two productions of the work during the winter of 1743-1744. The second performance on 20 January 1744 had also coincided with celebrations in the colony to mark the birthday of Frederick, Prince of Wales. The text of the first three acts is contained in the Mascarene papers, British Library. And four years after the Mascarene production, on 20 January 1748, Major Phillips and Captain Floyer also produced a play in honour of the Prince's birthday. Unfortunately, the Boston News Letter (3 March 1748) fails to indicate the title of the play. It does reveal, however, that the same play was staged a second time on 2 February 1748, at the request of Captain Winslow, after the colony received the news of Admiral Edward Hawke's success Second Battle of Cape Finisterre (1747), in October 1747.[7] 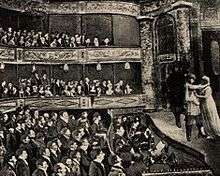 Antoine Foucher (1717-1801), of Terrebonne (father of Louis-Charles Foucher), was the owner of the first Francophone theatre in Canada. In 1774, with various British officers, he staged the first production of Molière at his home in Montreal.[8][9][10] Other Garrison performances were private shows put on for troops, publicly performed by officers, which helped bridge theatre and war during its initial stages of development. It was welcomed by the populaces and distracted soldiers from war and routine military protocol.[11]

Before 1825, the Hayes House Hotel on Dalhousie Square, Montreal, had a theatre that staged German Orchestras and held Viennese dances.[12] After it burned it down, John Molson built the Theatre Royal in 1825, presenting Shakespeare and Restoration authors. It sat 1,000 guests and was also used for circuses and concerts.[13] Edmund Kean and Charles Dickens both performed there before it was demolished in 1844 to make way for the Bonsecours Market.[14] In the West, the GRAND theatre is build in 1912 in Calgary by the visionary Sir James Lougheed.[15] The Grand was the initial home of many arts organizations in Calgary; the first theatre, opera, ballet, symphony concerts, and movies were seen here. This theatre was the centre of social, cultural, and political life in Calgary until the early 1960s. The Grand Theatre has been saved from demolition in 2004 by the company Theatre Junction and its director Mark Lawes.[16]

From 1929, Martha Allan founded the Montreal Repertory Theatre and later co-founded the Dominion Drama Festival. She loathed amateur theatre, but her energies spearheaded the Canadian Little Theatre Movement at a time when live theatre in Montreal and across Canada was being threatened by the rapid expansion of the American-influenced movie theatre. She almost single-handedly laid the groundwork for the development of the professional modern Canadian theatre scene.

With Canada's centennial in 1967 came a growing awareness of the need to cultivate a national cultural identity. Thus, the 1970s were marked by the establishment of multiple theatre institutions dedicated to the development and presentation of Canadian playwrights, such as Factory Theatre,[19] Tarragon Theatre,[20] and the Great Canadian Theatre Company.[21] Theatre Passe Muraille, under Paul Thompson's directorship in the 1970s, gained a national reputation for its distinctive style of collective creation with plays such as The Farm Show, 1837: The Farmer's Revolt and I Love You, Baby Blue.[22]

In 1971 a group of Canadian playwrights issued the Gaspé Manifesto as a call for at least one-half of the programing at publicly subsidized theatres to be Canadian content. The numerical goal was not achieved, but the following years saw an increase in Canadian content stage productions.[23][24]

The 1980s and 1990s saw a flourish of experimental theatre companies cropping up across Canada, many of whom were exploring site-specific and immersive staging techniques, such as Toronto's DNA Theatre[25] and Vancouver's Radix Theatre.[26]

The 2000s saw the creation of several theatre companies with specific cultural mandates including Obsidian Theatre, a company supporting 'the Black voice',[27] fu-GEN, a company dedicated to work by Asian Canadians,[28] and Aluna Theatre, a company with a focus on Latin Canadian artists.[29]