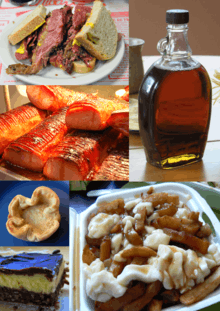 Canadian cuisine varies widely depending on the regions of the nation. The three earliest cuisines of Canada have First Nations, English, Scottish and French roots, with the traditional cuisine of English Canada closely related to British cuisine, while the traditional cuisine of French Canada has evolved from French cuisine and the winter provisions of fur traders. With subsequent waves of immigration in the 19th and 20th century from Central, Southern, and Eastern Europe, South Asia, East Asia, and the Caribbean, the regional cuisines were subsequently augmented.

Although certain dishes may be identified as "Canadian" due to the ingredients used or the origin of its inception, an overarching style of Canadian cuisine is more difficult to define. Some Canadians such as the former Canadian prime minister Joe Clark believe that Canadian cuisine is a collage of dishes from the cuisines of other cultures. Clark himself has been paraphrased to have noted: "Canada has a cuisine of cuisines. Not a stew pot, but a smorgasbord.".[1]

Some have sought to define Canadian cuisine along the line of how Claus Meyer defined Nordic cuisine in his Manifesto for the New Nordic Kitchen; namely that dishes in Canadian cuisine should reflect Canadian seasons, that they should use locally sourced ingredients that thrive in the Canadian climate, and that they are combined with good taste and health in mind.[2] Others believe that Canadian cuisine is still in the process of being defined from the cuisines of the numerous cultures that have influenced it, and that being a culture of many cultures, Canada and its cuisine is less about a particular dish but rather how the ingredients are combined.[2] 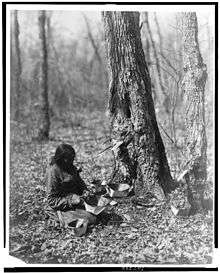 A 1908 photo of an Ojibwe woman tapping for tree sap, which is made into maple syrup.

Canadian food has been shaped and impacted by continual waves of immigration, with the types of foods and from different regions and periods of Canada reflecting this immigration.[3]

The traditional aboriginal cuisine of Canada was based on a mixture of wild game, foraged foods, and farmed agricultural products. Each region of Canada with its own First Nations and Inuit people used their local resources and own food preparation techniques for their cuisines.

Maple syrup was first collected and used by aboriginal people of Eastern Canada and North Eastern US. Canada is the world's largest producer of maple syrup.[4] The origins of maple syrup production are not clear though the first syrups were made by repeatedly freezing the collected maple sap and removing the ice to concentrate the sugar in the remaining sap.[5] Maple syrup is one of the most commonly consumed Canadian foods of Aboriginal origins.

In most of the Canadian West Coast and Pacific Northwest, Pacific salmon was an important food resource to the First Nations peoples, along with certain marine mammals. Salmon were consumed fresh when spawning or smoked dry to create a jerky-like food that could be stored year-round. The latter food is commonly known and sold as "salmon jerky". Whipped Soapberry, known as xoosum (HOO-shum, "Indian ice cream") in the Interior Salish languages of British Columbia, is consumed similarly to ice cream or as a cranberry-cocktail-like drink. It is known for being a kidney tonic, which are called agutak in arctic Canada (with animal/fish fat). 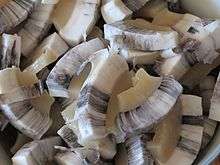 In the arctic, Inuit traditionally survived on a diet consisting of land and marine mammals, fish, and foraged plant products. Meats were consumed fresh but also often prepared, cached, and allowed to ferment into igunaq or kiviak. These fermented meats have the consistency and smell of certain soft aged cheeses. Snacks such as muktuk, which consist of whale skin and blubber is eaten plain, though sometimes dipped in soy sauce. Chunks of muktuk are sliced with an ulu prior to or during consumption. Fish are eaten boiled, fried, and prior to today's settlements, often in dried forms. The so-called "Eskimo potato" (Inuit: oatkuk: Claytonia tuberosa)[6] and other "mousefoods" are some of the plants consumed in the arctic.

Foods such as "bannock", popular with First Nations and Inuit, reflect the historic exchange of these cultures with Scottish fur traders, who brought with them new ingredients and foods.[7] Common contemporary consumption of bannock, powdered milk, and bologna by aboriginal Canadians reflects the legacy of Canadian colonialism in the prohibition of hunting and fishing, and the institutional food rations provided to Indian reserves.[8] Due to similarities in treatment under colonialism, many Native American communities throughout the continent consume similar food items with some emphasis on local ingredients.

In Canada's Prairie provinces, which saw massive immigration from Eastern and Northern Europe in the pre-WW1 era, Ukrainian, German, and Polish cuisines are strong culinary influences. Also noteworthy in some areas of the British Columbia Interior and the Prairies is the cuisine of the Doukhobors, Russian-descended vegetarians.[3]

The Waterloo, Ontario, region and the southern portion of the Province of Manitoba have traditions of Mennonite and Germanic cookery.

The cuisines of Newfoundland and the Maritime provinces derive mainly from British and Irish cooking, with a preference for salt-cured fish, beef, and pork. Ontario, Manitoba and British Columbia also maintain strong British cuisine traditions.

Jewish immigrants to Canada during the late 1800s played a significant culinary role within Canada, chiefly renowned for Montreal-style bagels and Montreal-style smoked meat. A regional variation of both emerged within Winnipeg, Manitoba's Jewish community, which also derived Winnipeg-style Cheesecake from New York recipes. Winnipeg has given birth to numerous other unique dishes, such as the schmoo torte and "co-op style" rye bread and cream cheese.

Much of what are considered "Chinese dishes" in Canada are more likely to be Canadian or North American inventions, with the Chinese restaurants of each region tailoring their traditional cuisine to local tastes.[3] This "Canadian Chinese cuisine" is widespread across the country, with great variation from place to place.

The Chinese buffet, although found in the United States and other parts of Canada, had its origins in early Gastown, Vancouver, c.1870. This serving setup came out of the practice of the many Scandinavians working in the woods and mills around the shantytown getting the Chinese cook to put out a steam table on a sideboard.

In Toronto, a style of medium-thick crust margarita pizza topped with garlic and basil oil topping is popular, which combines Italian pizza with the Vietnamese tradition of using herbed oil toppings in food.[9]

Common contenders as the Canadian national food include:

According to an informal survey by the Globe and Mail conducted through Facebook from collected comments, users considered the following to be the Canadian national dish, with maple syrup likely above all the other foods if it were considered:[13]

In another survey from the Canadian Broadcasting Corporation in the summer of 2012:[17]

While many ingredients are commonly found throughout Canada, each region with its own history and local population has unique ingredients, which are used to define unique dishes.

Wild game of all sorts is still hunted and eaten by many Canadians, though not commonly in urban centres. Venison, from white-tailed deer, moose, elk (wapiti) or caribou, is eaten across the country and is considered quite important to many First Nations cultures.[18] Seal meat is eaten, particularly in the Canadian North, the Maritimes, and Newfoundland and Labrador. Wild fowl like ducks and geese, grouse (commonly called partridge) and ptarmigan are also regularly hunted. Other animals like bear and beaver may be eaten by dedicated hunters or indigenous people, but are not generally consumed by much of the population.

West-Coast salmon varieties include Sockeye, Coho, Tyee a.k.a. Chinook or King, and Pink.

Wild chanterelle, pine, morel, lobster, puffball, and other mushrooms are commonly consumed. Canada produces good cheeses and many successful beers, and is known for its excellent ice wines and ice ciders. Gooseberries, salmonberries, pearberries, cranberries and strawberries are gathered wild or grown.

Although there are considerable overlaps between Canadian food and the rest of the cuisine in North America, many unique dishes (or versions of certain dishes) are found and available only in the country. Some are more commonly eaten than others. 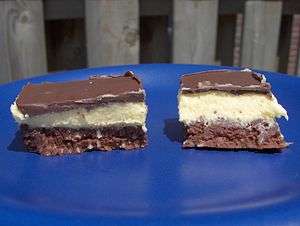 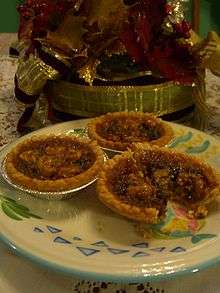 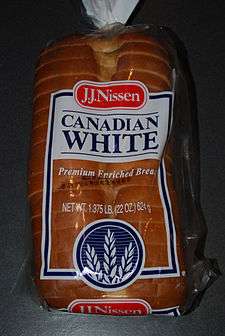 Canadian bread is heartier than regular white bread, and has a thicker consistency. In Canada, it is just known as white bread. This example is from an American brand. 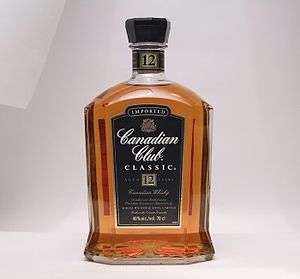 A bottle of aged Canadian whisky

While most major cities in Canada (including Montreal, in a pilot project) offer a variety of street food, regional "specialties" are notable. While poutine is available in most of the country, it is far more common in Quebec. Similarly, sausage stands can be found across Canada, but are far more common in Ontario (often sold from mobile canteen trucks, usually referred to as "fry trucks" or "chip trucks" and the sausages "street meat") than in Vancouver or Victoria (where the "Mr. Tube Steak" franchise is notable and the term "smokies" or "smokeys" refers to Ukrainian sausage rather than frankfurters).

Montreal offers a number of specialties including shish taouk, the Montreal hot dog, and dollar falafels. Although falafel is widespread in Vancouver, pizza slices are much more popular. Vancouver also has many sushi establishments. Shawarma is quite prevalent in Ottawa, and Windsor, while Halifax offers its own unique version of the döner kebab called the donair, which features a distinctive sauce made from condensed milk, sugar, garlic and vinegar. Ice cream trucks can be seen (and often heard due to a jingle being broadcast on loudspeakers) nationwide during the summer months. Recently, the city of Toronto has encouraged street vendors from around the world to sell their food.