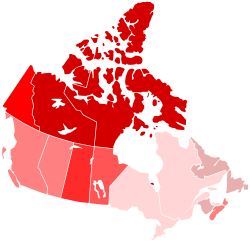 Under the Canadian constitution, the power to establish criminal law and rules of investigation is vested in the federal Parliament. The provinces share responsibility for law enforcement (although provincial policing in many jurisdictions is contracted to the federal Royal Canadian Mounted Police), and while the power to prosecute criminal offences is assigned to the federal government, responsibility for prosecutions is delegated to the provinces for most types of criminal offences. Laws and sentencing guidelines are uniform throughout the country, but provinces vary in their level of enforcement.

The province with the lowest crime rate in 2006 for the third straight year was Ontario with 5,689 per 100,000, followed by Quebec with 5,909 per 100,000. The province with the highest crime rate for the 9th straight year was Saskatchewan with 13,711 per 100,000. Regina is the city with the highest crime rate followed by its provincial counterpart Saskatoon. Quebec City, Trois-Rivières, and Saguenay have the lowest crime rates of any city and are all located in Quebec.[2] Winnipeg has had the highest violent crime rate since 2009 and still held it in 2012. For years native Canadian women have been victims of sexual assault and murder disproportionately often and there have been complaints that the police paid insufficient attention to the problem.[3] The three northern territories have higher per capita crime rates than any province. As evidenced by the crime map above right, Saskatchewan has a higher crime rate than the other Canadian provinces, but lower than the territories.

The number of murders dropped to 594 in 2007, 12 fewer than the previous year. One-third of the 2007 murders were stabbings and another third were by firearm. In 2007, there were 190 stabbings and 188 shootings. Handguns were used in two-thirds of all firearm murders. Seventy-four youths were accused of murder, down 11 from the previous year. About eighty-four percent of murders were done by someone known to the victim. Male victims of homicide were most likely to be killed by an acquaintance, someone known to them through a criminal relationship, or a stranger. Female victims of homicide were most frequently killed by a current or former intimate partner, or another family member. The province with the highest crime rate was Manitoba while the lowest crime rates occurred in Prince Edward Island and Newfoundland and Labrador.

Police reported criminal violence is thought to be an undercount of actual violence rates. Thus, approximately every five years, Statistics Canada conducts a survey of victimization in Canada. The last General Social Survey conducted was in 2004, where 24,000 people were contacted by telephone: 106 reported incidents of violence per 1,000 polled, which is slightly lower than in 1999 when it was 111 per 1,000 polled.[4]

Winnipeg has been the "Murder Capital" of Canada 16 times since homicide rates have been available in 1981, far exceeding any other city.

Crime statistics by province and territory

Crime statistics vary considerably through different parts of Canada. In general, the eastern provinces have the lowest violent crime rates while the western provinces have higher rates and the territories higher still. Of the provinces, Manitoba and Saskatchewan have the highest violent crime rates. The chart below also shows that Saskatchewan has the highest assault rate, and that Manitoba has the highest sexual assault rate, robbery rate and homicide rate of any Canadian province.

2012 crime statistics for the provinces and territories are given below, as reported by Statistics Canada.[12] 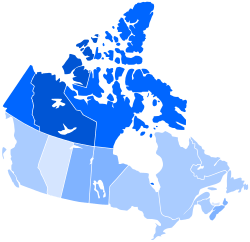 That is a substantially lower rate than most developed countries with only Japan and Sweden having so few police officers. The United States has one officer per 411.5 persons, and Germany 344.8.

A publication posted on Statistics Canada reported that in 2009, only a small portion of crimes that happen are reported to the police (31% of all crimes), and this figure has been lowering from 1999 (37%) and 2004 (34%).[16] Only 54% of break and enters, 43% of robberies, and 34% of assaults are reported to the police.[17] The most common reason for not reporting a crime was the victim thought it was not important enough (68%). Other common reasons include; they think the police cannot do anything about it (59%), or they dealt with it another way (42%). Keep in mind people can give multiple reasons, thus why the percentages equal well over 100%.

Comparing crime rates between countries is difficult due to the differences in jurisprudence, reporting and crime classifications. National crime statistics are in reality statistics of only selected crime types. Data are collected through various surveying methods that have previously ranged between 15% and 100% coverage of the data. A 2001 Statistics Canada study concluded that comparisons with the U.S. on homicide rates were the most reliable. Comparison of rates for six lesser incident crimes was considered possible but subject to more difficulty of interpretation. For example, types of assaults receive different classifications and laws in Canada and the US, making comparisons more difficult than homicides. At the time, the U.S. crime of aggravated assault could be compared to the sum of three Canadian crimes (aggravated assault, assault with a weapon, and attempted murder). This comparison had a predicted bias that would inflate the Canadian numbers by only 0.1%. The study also concluded that directly comparing the two countries' reported total crime rate (i.e. total selected crimes) was "inappropriate" since the totals include the problem data sets as well as the usable sets.[19] For reasons like these, homicides have been favored in international studies looking for predictors of crime rates (predictors like economic inequality).

Much study has been done of the comparative experience and policies of Canada with its southern neighbour the United States, and this is a topic of intense discussion within Canada.

Historically, the violent crime rate in Canada is far lower than that of the U.S. and this continues to be the case. For example, in 2000 the United States' rate for robberies was 65 percent higher, its rate for aggravated assault was more than double, and its murder rate was triple that of Canada. However, the rate of some property crime types is lower in the U.S. than in Canada. For example, in 2006, the rates of vehicle theft were 22% higher in Canada than in the US.[30]

Furthermore, in recent years, the gap in violent crime rates between the United States and Canada has narrowed due to a precipitous drop in the violent crime rate in the U.S. For example, while the aggravated assault rate declined for most of the 1990s in the U.S. and was 324 per 100,000 in 2000, the aggravated assault rate in Canada remained relatively steady throughout and was 143 per 100,000 in 2000. In other areas, the U.S. had a faster decline. For instance, whereas the murder rate in Canada declined by 36% between 1991 and 2004, the U.S. murder rate declined by 44%. [31]