Thrikodithanam Mahavishnu Temple is a Hindu temple dedicated to Vishnu and located in Thrikkodithanam, Kottayam District, Kerala, South India. Constructed in the Kerala style of architecture, the temple is glorified in the Divya Prabandha, the early medieval Tamil canon of the Azhwar saints from the 6th–9th centuries AD. It is one of the 108 Divyadesam dedicated to Krishna, an avatar of Vishnu, who is worshipped as MahaVishnu. The nearest railway station to the temple is located in Changanassery, while the nearest airport is Cochin International Airport.

It is one of the five ancient shrines around the Chengannur area of Kerala, connected with the legend of Mahabharata. Legend has it that the Pandava princes, after crowning Parikshit as king of Hastinapura left on a pilgrimage. On arriving on the banks of river Pamba, each one is believed to have installed a tutelary image of Krishna; Thrichittatt Maha Vishnu Temple by Yudhishthira, Thirupuliyur Mahavishnu Temple by Bheema, Aranmula Parthasarathy Temple by Arjuna, Thiruvanvandoor Mahavishnu Temple by Nakula and Thrikodithanam Mahavishnu Temple by Sahadeva.[1][2] 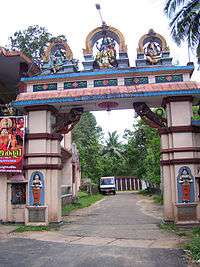 The Divya Kshetram was built by Sahadeva of Pandavas. King Rukmangatha of Surya Vamsa undertook Ekadasi Vratham and gifted all his punyas to Devas by which he reached Devaloka. There are also shrines for Krishna and Narasimha.

Another legend is that temple servant being cursed by the deity to turn into a stone as he delayed the opening of the temple doors making the devotees to wait for Darshan. The statue of the servant can be seen in front of the temple. A monthly Sravana Deepams (festival of light) is performed.

Sthlapuranam : This sthalam is said to be worshipped and constructed by Sahadevan, one among the Pandavas. This sthala perumal, Athpudha Narayanan gave his seva (prathyaksham) for Rukmaangadhan, who is one of the king of Soorya Vamsam (generation). He had a great thought for the world people and worked for their life. He greeted all the Gnanis, Yogis and bhaktaas of Vishnu and gave them proper respect and satisfied their needs. On hearing this, Vasishta Maharishi told about the great character of Rukmaangadhan to Indiran. To test the great character, Indran send Naradhar to Rukmaangadhan. Rukmaangadhan welcomed Naradhar and gave him lots of respect by doing Padha poojas and offered him with a special garland which had a peculiar flowers in that. Naradha getting the proper respect from him, left that place. By blessing him. Naradha went to Indra lokam with the garland that is given by Rukmaangadham. On seeing the beauty and the smell that came out from the flower, Indran was very much attracted by it and ordered his soldiers to get the flower from the Garden of Rukmaangadhan. As ordered by Indra, the soldiers daily stole the flowers from the Garden and gave it to Indran. Rukmaangadhan was surprised to see the flowers being plucked and placed some soldiers to check who is stealing the flowers. But, the deva loka soldiers, without being seen by the soldiers placed in garden, stole the flowers. The garden soldiers fired some garlic plants to get the light, so that using the light, they can easily catch the person who is stealing the flowers. The smell of Garlic is said to have the character of minimizing the Power of Gods. At this stage, the smoke of that came out of the Garlic plants mixed with the air and all the soldiers of Indran lost their powers and the soldiers in the garden also lost their power and as a result, they were caught and finally they said that they belong to Indra lokam and explained all the things. On hearing this, Rukmaangadhan didn't get angry, instead gave them proper respect and treated them well. But, Simultaneously all the soldiers, Devars in Deva lokam lost their power and that day is said to Ekadasi day. All of them asked at least minimum amount of credit from the person who is doing fasting on Ekadasi. Rukmaangadhan searched for a person who is fasting on Ekadasi. But, he could not identify not even a single one. Finally, a women who led her life by washing clothes of the village peoples fought with her husband and because of this, she didn't have her food for the day. Without knowing the day is Ekadesi, she did the fasting. He explained all the things to her and asked her to give the credit of the viradham, there by helping the devas of Deva lokam. She also accepted it and gave one part of her vradham to them and to regain their power. Rukmaangadhan thanked the women and gave lots of precious ornaments and money to her. Thus, through Rukmaangadhan, Sriman Narayanan explains the greatness of Ekadesi Viradham.

The Moolavar found in this sthalam is Athpudha Narayanan. He is also named as "Amirutha Narayanan". and He is in Nindra Thirukkolam facing the east direction. Prathyaksham for Rukmaangadhan.

Kazhuvetti Kallu – The strange statue outside 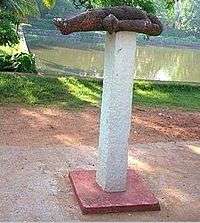 Between the pond and the eastern entrance, near a public platform for arts and discourses, is a strange granite statue. It is a man flat on his back, held up stiff and straight on a stone pillar about six feet high. Only his waist rests on the pillar, rest of the body is unsupported. He holds a shankhu (conch shell) in his left hand and wears the sacred thread indicative of the Brahmin castes. At one time the statue wore a crown as well. The idol is a stern reminder that bribery, cheating and dishonesty cannot be tolerated. Anybody who goes after these evils will be met with the capital punishment, such as, that met with the man lying on the stone.

Common folklore about this stone idol has a story of jealousy, indiscretion and swift retribution.

The ruler of Chembakaserry kingdom was a renowned Nambuthiri Brahmin who took pride in the prosperity of his own kingdom and Sri Krishna temple. Since temples were then considered keystones to a kingdom's spiritual and temporal well-being, the King decided to embarrass the rulers of Nanrulainattu (capital-Thrikodithanam) by making a deliberate, untimely visit to the famous Vishnu Temple. He arrived in Thrikodithanam after the Seiveli puja (the last ceremony of the day) and after the temple had closed. It is considered very inauspicious to open a temple after the gods are put to rest, but still, the King forced an entry by bribing a caretaker. When the rulers of Nanrulainattu discovered this indiscretion, they were furious. The caretaker was beheaded and, soon, the Chambakaserry king too fell ill and died. So this stone figure was installed near the temple entrance to deter any future offenders and to remind everybody of the consequences of disturbing the gods.

Another version of the story lays the blame on the king of Ambalapuzha for this surreptitious Darshan.

Nammalvar have composed beautiful pasurams dedicated to Lord Arputha Narayanan. It is one of the compositions in Naalayira Divya Prabandha.