The Government of Kerala(Malayalam:കേരള സർക്കാർ) headquartered at Thiruvananthapuram is a democratically elected body that governs the State of Kerala, India. The state government is headed by the Governor of Kerala as the nominal head of state, with a democratically elected Chief Minister as real head of the executive. The state government maintains its capital at Thiruvananthapuram (Trivandrum) and is seated at the Kerala Government Secretariat or the Hajur Kutcheri.

The Government of Kerala was formed on November 1, 1956 after merging of State of Travancore-Cochin with the Malabar district of the Madras state as part of States Reorganisation Act, 1956.

The Governor is appointed by the President for a term of five years. The executive and legislative powers lie with the Chief Minister and his council of ministers, who are appointed by the Governor. The Governors of the states and territories of India have similar powers and functions at the state level as that of the President of India at Union level. Only Indian citizens above 35 years of age are eligible for appointment. Governors discharge all constitutional functions such as the appointment of the Chief Minister, sending reports to the President about failure of constitutional machinery in a state, or with respect to issues relating to the assent to a bill passed by legislature, exercise or their own opinion.[1] 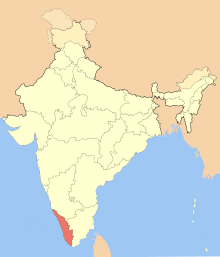 P Sathasivam is the present governor. The Governor enjoys many different types of powers: 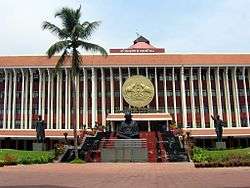 The legislature comprises the governor and the legislative assembly, which is the highest political organ in state. The governor has the power to summon the assembly or to close the same. All members of the legislative assembly are directly elected, normally once in every five years by the eligible voters who are above 18 years of age. The current assembly consists of 140 elected members and one member nominated by the governor from the Anglo-Indian Community. The elected members select one of its own members as its chairman who is called the speaker. The speaker is assisted by the deputy speaker who is also elected by the members. The conduct of meeting in the house is the responsibility of the Speaker.

The main function of the assembly is to pass laws and rules. Every bill passed by the house has to be finally approved by the governor before it becomes applicable.

The normal term of the legislative assembly is five years from the date appointed for its first meeting. But while a proclamation of state of emergency is in operation, the said period will be extended by Parliament by Laws for a period not exceeding one year at a time.[2]

High Court of Kerala at Ernakulam

The High Court of Kerala is the apex court for the state; it also hears cases from the Union Territory of Lakshadweep. It is a court of record and has all the powers of such a court including the authority to punish an individual for contempt of court. Like all other High Courts of India, this court also consists of a Chief Justice and other judges who are appointed by the President of India. At present, the sanctioned Judge strength of the High Court of Kerala is 27 Permanent Judges including the Chief Justice H.L. Dattu and two additional judges. Every judge including the Chief Justice is appointed by the President of India by Warrant under his hand and seal. Every permanent and additional judge will continue in office until the age of 62.[3]

The High Court of Kerala is located in Ernakulam and there are courts in every district centres and some municipal centres.

The Government Secretariat Complex in Thiruvananthapuram, which houses offices of ministers and secretaries
Main article: Kerala Council of Ministers

The executive authority is headed by the Chief Minister of Kerala, who is the de facto head of state and is vested with most of the executive powers; the Legislative Assembly's majority party leader is appointed to this position by the Governor. The present Chief Minister is Pinarayi Vijayan, who took office on 25 May 2016. Generally, the winning party decides the chief minister. In many cases, the party focuses a chief ministerial candidate during the election.

The Council of Ministers, which answers to the Legislative Assembly, has its members appointed by the Governor; the appointments receive input from the Chief Minister. They are collectively responsible to the legislative assembly of the State. Generally, the winning party and its chief minister chooses the ministers list and submit the list for the Governor's approval.

Kerala State has been divided into 14 districts,21 revenue divisions,14 District Panchayats, 75 taluks, 152 CD blocks, 1453 revenue villages, 978 Gram panchayats, 5 corporations and 60 municipalities.[4] The business of the state government is transacted through the various secretariat departments based on the rules of business. Each department consists of secretary to government, who is the official head of the department and such other under secretaries, junior secretaries, officers and staffs subordinate to him/her. The Chief secretary superintending control over the whole secretariat and staff attached to the ministers.

The department is further divided into sections, each of which is under the charge of a section officer. Apart from these sections, dealing with the subjects allotted to them, there are other offices sections, assigned with specific duties. When there is more than one secretary in a department, there shall be a clear separation of work.[5]

The Kerala State Emblem is a derivative version of the Royal coat of arms of the Kingdom of Travancore. The state emblem symbolises two elephants guarding the Imperial Shanku in its Imperial crest. The Imperial Counch Crest or Shanku was the Imperial Insignia of Lord Sree Padmanabha (A form of Lord Vishnu)- the National Deity of Travancore. Shanku was considered as one of the common emblems of majority of Kerala feudal kingdoms. The Kingdom of Cochin and Zamorin's Malabar also had counch as state emblems. When the Kingdoms of Cochin and Travancore merged in 1949, for a brief period, the crest carried a wheel or chakra in centre with Shanku on top of it. With accession of Malabar into Travancore-Cochin, the state of Kerala was formed in 1957. During this time, the royal coat of arms of the Travancore kingdom was modified by placing the "Lion Capital of Ashoka" on top of the Imperial conch. The Travancore Royal Family uses the erstwhile Royal Coat of Arms of Travancore today, whereas Sree Padmanabhaswamy Temple of Trivandrum uses only the Imperial Conch crest as its Coat of Arms.

The state animal of Kerala is elephant and the government emblem has two elephants in it. The state bird is the great Indian hornbill (ML:മലമ്പുഴക്കി വേഴാമ്പല്‍),the state flower is the golden shower (ML:കണിക്കൊന്ന) and the state tree is the coconut[6] and the state fish is pearlspot or karimeen (കരിമീന്‍‌).

Elections to the state assembly are held every five years. Elections are generally held for Parliament, State assembly and regional panchayats. Due to the large numbers of eligible voters, over 21 million, elections are usually held on several dates. Like all other Indian states, the minimum age of registration of a voter is 18 years.

Kerala has a unique position in India as one of the most politicised states. It has the nation's largest politically aware population, which actively participates in state politics.

Politics in Kerala is dominated by two political fronts: the CPI(M)/CPI-led Left Democratic Front (LDF) and the Indian National Congress-led United Democratic Front (UDF) since late 1970s. These two coalitions have alternated in power since 1982. According to the 2011 Kerala Legislative Assembly election results, the UDF has a majority in the state assembly (73/140).

The political alliance has strongly stabilised and, with rare exceptions, most of the coalition partners maintain loyalty to the alliance. As a result of this, power has alternated between these two fronts since 1979.

In terms of individual parties, the state has a strong leanings towards socialism and thus Communist parties have made strong inroads in Kerala. The Malabar region, particularly Kannur and Palakkad, are considered the heartland of the Communist parties. The Kollam and Alapuzha districts, where trade unions have a strong presence, are generally inclined to Left parties, though several times the UDF has won. The CPI(M) led LDF did a clean sweep of 11-0 over UDF and NDA in Kollam district during 2016 Local body election.[7] The largest Communist party is the CPIM and the second largest is the CPI.

The Indian National Congress, which leads the UDF coalition, has had a very strong presence in Kerala since pre-Independence days. The Congress party has great popularity in the Thrissur, Ernakulam and Thiruvananthapuram regions.

Other popular regional parties are

The Bharathiya Janata Party (the Party that currently leads the Government of India) is also active in Kerala, but is not part of either coalition. It does not have any elected Parliament or Legislative Assembly members in Kerala, but has elected members in all the Corporations, several Municipal Councils and a large number of Local Panchayats, and won a record-high 10% of the total vote share in Kerala in the 2014 Lok Sabha elections.