The Aranmula Parthasarathy Temple is one of the "Divya Desams", the 108 temples of Vishnu revered by the 12 poet saints, or Alwars located near Aranmula, a village in Pathanamthitta District, Kerala, South India. Constructed in the Kerala style of architecture, the temple is glorified in the Divya Prabandha, the early medieval Tamil canon of the Azhwar saints from the 6th–9th centuries AD. It is one of the 108 Divyadesam dedicated to Krishna, an avatar of Vishnu, who is worshipped as Parthasarathy. The nearest railway station to the temple is located in Chengannur, while the nearest airport is Trivandrum International Airport.

Parthasarathy is the other name of Krishna on account of his role as Arjuna's Charioteer in the Mahabharata war. It is one of the most important Krishna temples in Kerala, the others being at Guruvayur Temple, Trichambaram Temple, Tiruvarppu and Ambalappuzha Sri Krishna Temple. It is one of the five ancient shrines in the Chengannur area of Kerala, connected with the legend of Mahabharata, where the five Pandavas are believed to have built one temple each; Thrichittatt Maha Vishnu Temple by Yudhishthira, Puliyur Mahavishnu Temple by Bheema, Aranmula by Arjuna, Thiruvanvandoor Mahavishnu Temple by Nakula and Thrikodithanam Mahavishnu Temple to Sahadeva.

The sacred jewels, called Thiruvabharanam of Ayyappan are taken in procession to Sabarimala each year from Pandalam, and Aranmula Temple is one of the stops on the way. Also, the Thanka Anki, golden attire of Ayyappa, donated by the king of Travancore, is stored here and taken to Sabarimala during the Mandala season of late December. Aranmula is also known for snake boat race held every year during Onam linked to the legends of the Mahabharata. The temple has four towers over its entrances on its outer wall. The Eastern tower is accessed through a flight of 18 steps and the Northern tower entrance flight through 57 steps leads to the Pampa River. The temples have paintings on its walls dating back to early 18 century.

It is one of the five ancient shrines in the Chengannur area of Kerala, connected with the legend of Mahabharata. Legend has it that the Pandava princes, after crowning Parikshit as king of Hastinapura left on a pilgrimage. On arriving on the banks of river Pamba, each one is believed to have installed a tutelary image of Krishna; Thrichittatt Maha Vishnu Temple by Yudhishthira, Puliyur Mahavishnu Temple by Bheema, Aranmula by Arjuna, Thiruvanvandoor Mahavishnu Temple by Nakula and Thrikodithanam Mahavishnu Temple to Sahadeva.[1][2]

The image of the temple was brought here in a raft made of six pieces of bamboo to this site, and hence the name Aranmula (six pieces of bamboo). As per other legend, the place derives its name from arin-villai, a land near a river.[3] Legend has it that Arjuna built this temple, to expiate for the sin of having killed Karna on the battlefield, against the dharma of killing an unarmed enemy. It is also believed that Vishnu (here) revealed the knowledge of creation to Brahma, from whom the Madhukaitapa demons stole the Vedas.[4]

There is yet another legend associated with Parthasarathy here. On the ninth day of the battle of Kurukshetra, the Kauravas reigned supreme under the leadership of Bheeshma, when Krishna motivated Arjuna to take initiative and vanquish his foe. Upon his hesitating to do so, Krishna jumped down in rage, and took up his discus; seeing this sight Bheeshma surrendered to him and Arjuna beseeched him not to kill Bheeshma, as it would have been against Krishna's vow to take up arms in his battle. It is believed that it is this image of Krishna that is enshrined here, with a discus.[2]

Aranmula Mirror is also related to the history of this temple.[5] The king of Travancore wanted to donate a crown made of rare metal to the temple and he found a rare combination of Copper and lead.[6] It is believed as per the tradition that preparing the metal polished mirror was produced only by a family. In modern times, the College of Fine Arts have started producing it in commercial scale.[7] 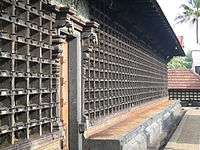 The outer walls around the sanctum housing the structure of lamps, called Vilakkumaadam

The temple is built in Kerala style architecture, which is common in all temples in the South Indian state of Kerala in Eastern axis. The temple has an elevated structure reached by a flight of 20 steps. The temple has a two storeyed gopuram or a gateway tower, with the upper storey having wooden trails covering the Kottupura (a hall of drum beating during festivals). A rectangular wall around the temple, called Kshetra-Madilluka piereced by the gateways, encloses all the shrines of the temple. The metal plated flagpost or Dwajasthambam is located axial to the temple tower leading to the central sanctum and there is a Deepastamba, which is the light post. Chuttuambalam is the outer pavilion within the temple walls. The central shrine and the associated hall is located in a rectangular structure called Nallambalam, which has pillared halls and corridors.[8] Between the entrance of Nallambalam to the sanctum, there is a raised square platform called Namaskara Mandapa which has a pyramidal roof. Thevrapura, the kitchen used to cook offering to the deity is located on the left of Namaskara Mandapa from the entrance. Balithara is an altar is used for making ritualistic offering to demi-gods and the festive deities. The central shrine called Sreekovil houses the image of the presiding deity. It is on an elevated platform with a single door reached through a flight of five steps. Either sides of the doors have images of guardian deities called Dvarapalakas. As per Kerala rituals, only the main priest called Thantri and the second priest called Melshanthi alone can enter the Sree Kovil.[9] The central shrine has a circular plan with the base built of granite, superstructure built of laterite and conical roof made of terrocata tile supported from inside by a wooden structure. The lower half of Sree Kovil consists of the basement, the pillar or the wall, called stambha or bhithi and the entablature called prasthara in the ratio 1:2:1, in height. Similarly the upper half is divided into the neck called griva, the roof tower called shikhara and the fonial kalasam (made of copper) in the same ratio. The roof projects in two levels to protect the inner structure from heavy rains during monsoon. The roof of the temple and some of the pillars have lavish wood and stucco carvings depicting various stories of ancient epics, Ramayana and Mahabharatha.[10] The outer walls around the sanctum have a series of wooden frames housing an array of lamps, which are lit during festive occasions.[11] The temples have paintings on its walls dating back to early 18 century.[12] The image of the presiding deity is 6 ft (1.8 m) tall. Krishna is in Vishvarupa pose, the one he depicted to Arjuna during the Mahabharatha war. As per one legend, Arjuna is believed to have built the temple in Nilakal Narayanapuram and later brought to Aranmula in a raft made with six bamboo.[6] In the second precicnt, there are shrines of Sastha, Yakshi, Nagaraja and Erangavil Bhagavathy Balarama in the lower shrine.[6]

As per Hindu legend in Mahabharata, Arjuna, one of the Pandavas was returning with the image of Krishna after along penance. He faced a huge flood in the Pamba river. A poor low caste Hindu helped him cross the river with a raft made with six bamboos. It is believed that the Aranmula Boat Race is celebrated annually on the Pamba river to commemorate the poor Hindu.[13] The race is held on the last day of the Onam festival when snake boats around 100 ft (30 m) with four helmsmen, 100 rowers and 25 singers participate. The boats move in pairs to the rhythm of music. After the watersport, there is an elaborate feast in the Aranmula temple.[14] The festival is the largest boat race festival held in Kerala and is attended by thousands of visitors.[13] The festival was largely a religious one until 1978, when the Government of Kerala declared it a sports event, but during 2000, the religious festivities were restored.[15]

The Malayalam month of Meenam witnesses a festival where Aranmula Parthasarathy is taken in a grand procession on the Garuda mount to the Pampa river bank, where an image of the Bhagawati from the nearby Punnamthode temple is brought in procession for the Arattu festival.[6]

Another festival celebrated here is the Khandavanadahanam celebrated in the Malayalam month of Dhanus. For this festival, a replica of a forest is created in front of the temple with dried plants, leaves and twigs. This bonfire is lit, symbolic of the Khandavana forest fire of the Mahabharata.

The heads of three Brahmin households in Aranmula and nearby Nedumprayar follow a tradition of fasting on Thiruvonam. The tradition reportedly dates back to more than two centuries. It is believed that once a Brahmin made a vow to feed one pilgrim everyday. Pleased with his devotion, the presiding deity appeared to him. From then on, the Brahmin was overjoyed and he made it a custom to feed to conduct a feast every year, which is practised in modern times. The feast is conducted after the boat race.[15][16]