The Tribal Assembly or Assembly of the People (comitia populi tributa) of the Roman Republic was a democratic assembly consisting of all Roman citizens. During the years of the Roman Republic, citizens were organized on the basis of 35 tribes: 4 tribes (the "urban tribes") encompassed citizens inside the city of Rome, while the other 31 tribes (the "rural tribes") encompassed citizens outside the city. The tribes gathered into the Tribal Assembly for legislative, electoral, and judicial purposes. In any tribe, decisions were made by majority vote. Each tribe received one vote, regardless of how many electors each tribe held. Once a majority of tribes voted in the same way on a given measure, the voting ended, and the matter was decided.[1] The president of the Tribal Assembly was usually either a "consul" (the highest ranking Roman magistrate) or a "praetor" (the second-highest ranking Roman magistrate). The Tribal Assembly elected three different magistrates: "quaestors", "curule aediles", and "consular tribunes".[2] The Tribal Assembly also had the power to try judicial cases. However, after the reforms of the Roman Dictator Lucius Cornelius Sulla in 82 BC, the power to try cases was reassigned to special jury courts (quaestiones perpetuae).

In the Roman system of direct democracy, two primary types of assembly were used to vote on legislative, electoral, and judicial matters. The first was the Committee (comitia, literally "going together" or "meeting place").[3] The Tribal Assembly was a Committee. Committees were assemblies of all citizens,[4] and were used for official purposes, such as for the enactment of laws. Acts of a Committee applied to all of the members of that Committee. The second type of assembly was the Council (concilium), which was a forum where specific groups of citizens met. In contrast, the Convention (conventio, literally "coming together") was an unofficial forum for communication. Conventions were simply forums where Romans met for specific unofficial purposes, such as, for example, to hear a political speech.[3] Private citizens who did not hold political office could only speak before a Convention, and not before a Committee or a Council.[5] Conventions were simply meetings, and no legal or legislative decisions could be made in one. Voters always assembled first into Conventions to hear debates and conduct other business before voting, and then into Committees or Councils to actually vote.[6] 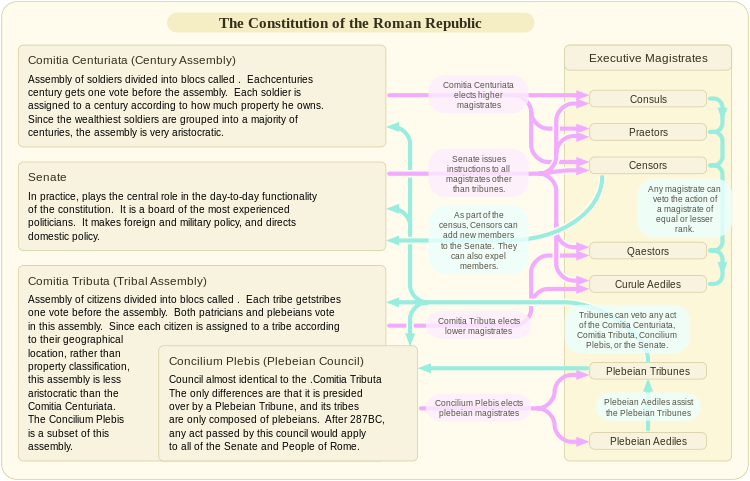 A notice always had to be given several days before the assembly was to actually vote. Elections required notice of at least 3 market-days (often more than 17 days). During this time period (the trinundinum), the candidates interacted with the electorate, and no legislation could be proposed or voted upon. In 98 BC, a law was passed (the lex Caecilia Didia) which required a similar three market-day interval to pass between the proposal of a law and the vote on that law.[7] During criminal trials, the assembly's presiding magistrate had to give a notice (diem dicere) to the accused person on the first day of the investigation (anquisitio). At the end of each day, the magistrate had to give another notice to the accused person (diem prodicere), which informed him of the status of the investigation. After the investigation was complete, a three market-day interval had to elapse before a final vote could be taken with respect to conviction or acquittal.[8]

Only one assembly could operate at a time, and any session already underway could be dissolved if a magistrate "called away" (avocare) the electors.[7] In addition to the presiding magistrate, several additional magistrates were often present to act as assistants. They were available to help resolve procedural disputes, and to provide a mechanism for electors to appeal decisions of the presiding magistrate.[9] There were also religious officials (known as augurs) either in attendance or on-call, who would be available to help interpret any signs from the gods (omens), since the Romans believed that the gods communicated their approval or disapproval with proposed actions.[9] In addition, a preliminary search for omens (auspices) was conducted by the presiding magistrate the night before any meeting.[2] On several known occasions, presiding magistrates used the claim of unfavorable omens as an excuse to suspend a session that was not going the way they wanted.

On the day of the vote, the electors first assembled into their Convention for debate and campaigning.[6] In the Conventions, the electors were not sorted into their tribes. Speeches from private citizens were only heard if the issue to be voted upon was a legislative or judicial matter, and even then, only with permission from the presiding magistrate.[10] If the vote was for an election, no speeches from private citizens were heard, and instead, the candidates for office used the Convention to campaign.[11] During the Convention, the bill to be voted upon was read to the assembly by an officer known as a "Herald". Then the order of the vote had to be determined. An urn was brought in, and lots were cast to determine the sequence by which the tribes were to vote. A Plebeian Tribune could use his veto against pending legislation up until this point, but not after.[12]

The electors were then told to break up the Convention ("depart to your separate groups", or discedite, quirites). The electors assembled behind a fenced off area[6] and voted by placing a pebble or written ballot into an appropriate jar.[13] The baskets (cistae) that held the votes were watched by specific officers (the custodes), who then counted the ballots, and reported the results to the presiding magistrate. The majority of votes in any tribe decided how that tribe voted. If the process was not complete by nightfall, the electors were dismissed without having reached a decision, and the process had to begin again the next day.[14]

For more details on this topic, see Roman tribe.

The 35 tribes were not ethnic or kinship groups, but generic divisions into which Roman citizens were distributed. When the tribes were created, the divisions were geographical, similar to modern U.S. Congressional districts. However, tribe membership was inherited from fathers, so the geographical distinctions were eventually lost.[15] Each tribe had further subdivisions, called vici in urban tribes and pagi in rural tribes. While other subdivisions within tribes were possible, such as professional guilds ("colleges" or collegia), the tribe always remained the fundamental organizing unit.

Each tribe had its own officers, such as Treasurers (divisores) Registers (who conducted the tribal census),[16] and by the late republic, officers whose only task was to distribute bribes. Because tribal membership was reaffirmed once every five years in each census, it became possible to crudely gerrymander tribes. While land could never be taken away from a tribe, the magistrates known as "censors" had the power to allocate new lands into existing tribes as a part of the Census. Thus, Censors had the power to apportion tribes in a manner that might be advantageous to them or to their partisans.[17]

During the early and middle republic, the Tribal Assembly met at various locations in the Roman Forum, including the rostra, the comitium, the Temple of Castor and Pollux, and in a location near the Temple of Jupiter Optimus Maximus (the area Capitolina). By the late republic, the assembly often met right outside of the city wall on the Field of Mars (Campus Martius), because the size of the field allowed votes to occur more quickly.[18]

The presiding magistrate (either a Consul or a Praetor), always ensured that all tribes had at least five members voting, and if any tribe did not, the magistrate reassigned individuals from other tribes into the vacant tribe.[17] The order that the 35 tribes voted in was selected randomly by lot: after each tribe had voted, a lot was used to determine which tribe should vote next.[19]

The first tribe selected (the principium) was usually the most important tribe, because it often decided the matter. It was believed that the order of the lot was chosen by the gods, and thus, that the position held by the early voting tribes was the position of the gods.[20] As can (usually) be seen in US Presidential primaries, the early results tended to create a bandwagon effect. Once a majority of tribes had voted the same way, voting ended.