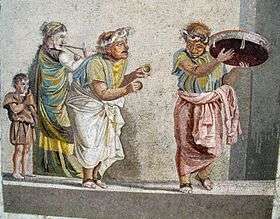 Trio of musicians playing an aulos, cymbala, and tympanum (mosaic from Pompeii)

The music of ancient Rome was a part of Roman culture from earliest times. Music was customary at funerals, and the tibia (Greek aulos), a woodwind instrument, was played at sacrifices to ward off ill influences. Song (carmen) was an integral part of almost every social occasion. The Secular Ode of Horace, for instance, was commissioned by Augustus and performed by a mixed children's choir at the Secular Games in 17 BC. Under the influence of ancient Greek theory, music was thought to reflect the orderliness of the cosmos, and was associated particularly with mathematics and knowledge.

Etruscan music had an early influence on that of the Romans. During the Imperial period, Romans carried their music to the provinces, while traditions of Asia Minor, North Africa and Gaul became a part of Roman culture.

Music accompanied spectacles and events in the arena, and was part of the performing arts form called pantomimus, an early form of story ballet that combined expressive dancing, instrumental music and a sung libretto.

Musicians in a detail from the Zliten mosaic (2nd century AD), originally shown as accompanying gladiator combat and wild-animal events in the arena: from left, the tuba, hydraulis (water pipe organ), and two cornua

The Romans may have borrowed the Greek method of 'enchiriadic notation' to record their music, if they used any notation at all. Four letters (in English notation 'A', 'G', 'F' and 'C') indicated a series of four succeeding tones. Rhythm signs, written above the letters, indicated the duration of each note.

The Romans may have tuned their instruments to Greek modes.

Roman art depicts various woodwinds, "brass", percussion and stringed instruments. Roman-style instruments are found in parts of the Empire where they did not originate, and indicate that music was among the aspects of Roman culture that spread throughout the provinces. 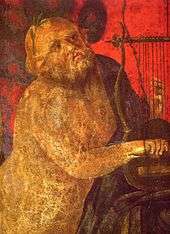 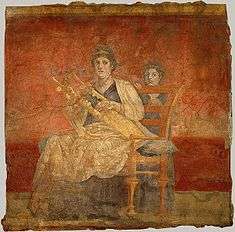 Left image:: Silenus holding a lyre, detail of a fresco from the Villa of the Mysteries, Pompeii, Italy, c. 50 BC
Right image: wall fresco of a seated woman with a kithara, 40-30 BC, from the Villa Boscoreale of P. Fannius Synistor; late Roman Republic. 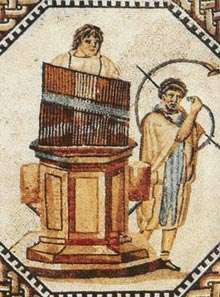 Mosaics depict instruments that look like a cross between the bagpipe and the organ. The pipes were sized so as to produce many of the modes (scales) known from the Greeks. It is unclear whether they were blown by the lungs or by some mechanical bellows.

The hydraulic pipe organ (hydraulis), which worked by water pressure, was "one of the most significant technical and musical achievements of antiquity". Essentially, the air to the pipes that produce the sound comes from a mechanism of a wind-chest connected by a pipe to a dome; air is pumped in to compress water, and the water rises in the dome, compressing the air and causing a steady supply to reach the pipes (also see Pipe organ#History). The instrument goes back to the ancient Greeks and a well-preserved model in pottery was found at Carthage in 1885.

The hydraulis accompanied gladiator contests and events in the arena, as well as stage performances. It might also be found in homes, and was among the instruments that the emperor Nero played. 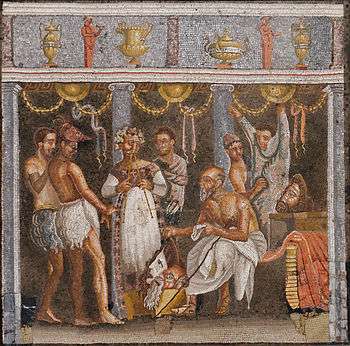 Masked theatrical troupe around an aulos player (mosaic from the House of the Tragic Poet, Pompeii)

In spite of the purported lack of musical originality on the part of the Romans, they did enjoy music greatly and used it for many activities. Music was also used in religious ceremonies. The Romans cultivated music as a sign of education. Music contests were quite common and attracted a wide range of competition, including Nero himself, who performed widely as an amateur and once traveled to Greece to compete. 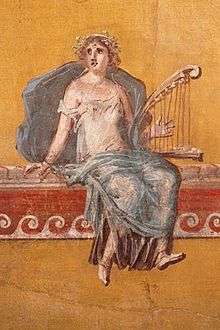