For the court case about the British steamship, see The S. S. Appam.

Appam is a type of pancake made with fermented rice batter and coconut milk. It is a common food in the South Indian state of Kerala.[1][2][3][4][5] It is also popular in Tamil Nadu and Sri Lanka.[6] It is eaten most frequently for breakfast or dinner.

It is considered as a staple diet and a cultural synonym of the Nasranis (also known as Saint Thomas Christians or Syrian Christians) of Kerala.[2][3][4][7][8] According to Gil Marks, each of the three separate Indian Jewish communities - Cochin, Mumbai, Calcutta - counts in its culinary repertoire grain dishes called appam.[9] 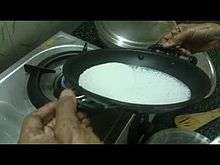 Video of making an appam

Vir Sanghvi, an Indian journalist, quotes food historian K. T. Achaya and states that the appam is mentioned in the Tamil Perumpanuru.[5][10][11] K. T. Achaya in the last published book of his lifetime states that Appam was well established in ancient Tamil country (comprising most parts of present-day South India), as per references in the Perumpanuru.[11] Appam first emerged in the southern tip of India, as per Gil Marks.[9]

It is called aappam (ஆப்பம்) in Tamil, appam (അപ്പം) in Malayalam, appa (ආප්ප) in Sinhala, chitau pitha (ଚିତାଉ) in Oriya, paddu or gulle eriyappa in Kodava, and arpone (အာပုံမုန့်) in Burmese. Appam is commonly referred to by its anglicized name, hoppers, in Sri Lanka. In Indonesia it is known as kue apem. 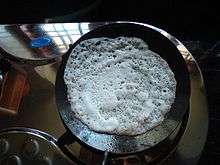 An appam being cooked in Kerala

Plain Appam or Vella Appam are bowl-shaped thin pancakes made from fermented rice flour. They derive their shape from the small appachatti in which they are cooked. They are fairly neutral in taste and mostly served with some spicy condiment or curry. These hoppers are made from a batter using rice, yeast, salt and a little sugar. After the mixture has stood for a couple of hours, it can be fried in the appachatti with a little oil. In south-central Kerala, it is mostly served with kadala curry, mutton or vegetable stew or egg roast.

Palappam is prepared using a spoonful of thick coconut milk/coconut cream added to the doughy centre. When cooked, the centre is firm to the touch but remains soft inside and is sweeter as a result of the coconut milk.

It is a form of appam where kallu is added to the fresh batter to kick start the fermentation. It might also denote appam cooked on a griddle (kal) instead of appachatti.

They are same as plain hoppers, but an egg is broken into the pancake as it cooks

Honey hoppers are crispy pancakes cooked with a generous amount of palm treacle. Some people also like to add some jaggery just before serving to make it extra sweet.

Idiyappam (string hopper or noolputtu) is made from rice noodles curled into flat spirals. It is served for breakfast with a thin fish or chicken curry, containing only one or two pieces of meat, a dhal (lentil) dish, and a spicy sambol or fresh chutney. String hoppers are made from steamed rice flour made into a dough with water and a little salt, and forced through a mould similar to those used for pasta to make the strings. They are cooked by steaming. These hoppers can be bought ready-made. The Indian and Sri Lankan population eats string hoppers for breakfast or dinner. There are many variations to this, depending on the type of flour used etc. This simple dish can be adapted into other foods such as string hopper Biriyani, by adding scrambled eggs or vegetables.[12] Another example is located in Kerala, 'Idiyappam' Paaya (goat leg soup made using coconut). 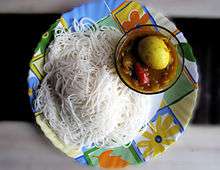 Achappam is a deep fried rose cookie made with rice. It is a signature Syrian Christian food as per K. T. Achaya.[13]

Kuzhalappam is a typical Syrian Christian dish which is a fried crisp curled up like a tube.[1]

Neyyappam owes its origins to Kerala and is a signature food of Syrian Christians of Kerala, as per K. T. Achaya.[13] It is made with rice flour, jaggery, clarified butter ghee.

Unni appam is a variation in which mashed plantain is added to the batter. The batter is made out of rice flour, jaggery and plantain is poured into a vessel called appakarai or appakaram, which has ghee heated to a high temperature. The appams take the shape of small cups and are fried until deep brown. Both neyyappam and unni appam are eaten as snacks.

Pesaha appam is made by Nasrani Christians in Kerala during Pesaha (Passover). This type of appam is dipped in syrup or Pesaha Pal (Passover Coconut Milk) before being served.[14] 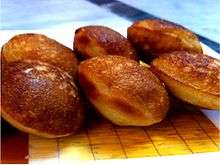 Vattayappam is made from rice flour, sugar, and coconut. The dish is made by steam-cooking the batter, and is very similar to the bánh bò from Vietnam.

Kandarappam, is a sweet dish made using rice and all 4 dals and jaggery. The dish has all the ingredients that is considered to bring good luck in Hindu tradition. Using all 4 dals is considered auspicious during festivals.

In Indonesia, a variant of appam is known as kue apem or kue apam. It is an Indonesian kue or traditional cake of steamed dough made of rice flour, coconut milk, yeast and palm sugar, usually served with grated coconut.[15] It is quite similar to kue mangkok. Just like kue putu it is derived from Indian influence on Indonesian cuisine.