View of the Agency House in Dhar State, one of the former centres of the administration of the Central India Agency.

The Central India Agency was created in 1854, by amalgamating the Western Malwa Agency with other smaller political offices which formerly reported to the Governor-General of India. The agency was overseen by a political agent who maintained British relations with the princely states and influence over them on behalf of the Governor-General. The headquarters of the agent were at Indore.

British hegemony over the states of Central India began in 1802, when several states in the Bundelkhand and Bagelkhand regions came under British control at the conclusion of the Treaty of Bassein between the British and the Maratha - Peshwa Bajirao II. British control of Bundelkhand expanded at the conclusion of the Second Anglo-Maratha War in 1805. The remaining states, including Gwalior, Indore, Bhopal and a number of smaller states in the regions of Malwa, Nimar, and Bundelkhand, came under British control with the end of the Third Anglo-Maratha War in 1818. The estate of Chanderi was ceded to the Sindhia ruler of Gwalior in 1844 by the British, and Jhansi State was seized by the British in 1853 under the doctrine of lapse was added to the United Provinces. In 1921 Gwalior Residency was separated from the Central India Agency, and in 1933 the state of Makrai transferred to Central India from the Central Provinces and Berar.

The princely states in the area of the Agency, 148 in all, varied in status and greatly in size.

The princely states were closely related to one of several political officers, which were rearranged a number of times in the history of the Agency. Upon the British withdrawal from India in 1947, the political offices consisted of Indore Residency and the Bundelkhand, Bhopal and Malwa Agencies.

Bundelkhand Agency was bounded by Bagelkhand to the east, the United Provinces to the north, Lalitpur District to the west, and the Central Provinces to the south. Bagelkhand Agency was separated from Bundelkhand in 1871. In 1900 it included 9 states, the most important of which were Orchha, Panna, Samthar, Charkhari, Chhatarpur, Datia, Bijawar and Ajaigarh. The agency also included 13 estates and the pargana of Alampur, the latter belonging to Indore State.[1]

In 1931, all of the states under the Baghelkhand Agency apart from Rewa were transferred back to Bundelkhand.

Former princely States that were annexed or seized by the British :

Bagelkhand Agency, the easternmost charge, was established in March 1871, when it was separated from Bundelkhand agency. In 1900, it covered the area of twelve states, including :

In 1931, all of the states but Rewa were transferred back to Bundelkhand, and in 1933 Rewa was transferred to the Indore Residency.

Indore Residency included most of Indore (Holkar) and after 1933 also Rewa State.

In 1925, the Malwa Agency was amalgamated with Bhopawar Agency. 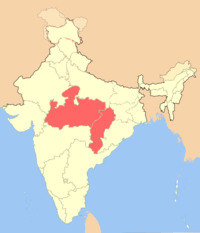 Upon the British withdrawal from India in 1947, the rulers of the princely states in this area all chose to accede to the new Union of India. The eastern portion of Central India Agency, including Bagelkhand and Bundelkhand agencies, became the new state Vindhya Pradesh. The western portion, including Bhopal, Malwa, and Bhopawar agencies and the Gwalior and Indore residencies, became the new state of Madhya Bharat. Bhopal became a separate state. Makrai was transferred to Madhya Pradesh, which had been created from the former Central Provinces and Berar in 1950. In 1956, the states of Vindhya Pradesh, Madhya Bharat, and Bhopal were merged into Madhya Pradesh. Later another state, Chhattisgarh, was formed from the area that was formerly Madhya Pradesh.