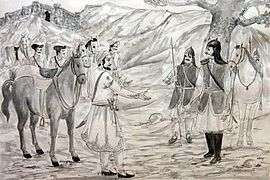 Chhatrasal, the founder of Panna State, together with Maratha leader Shivaji. 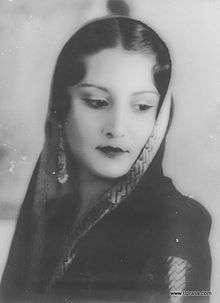 Queen Kanchan Prabha Devi, wife of the King of Tripura Bir Bikram Kishore Debbarman and regent (1947 - 1949), was the daughter of Maharaja Yadvendra Singh of Panna

The state of Panna belonged to the Bundelkhand Agency and covered an area of 6724 km² with 1,008 villages within its borders in 1901. It took its name from the chief town in the area, Panna, which was the capital of the state.

A predecessor state was founded by one of the Raj Gond chiefs of the area around 1450.[2] Almost three centuries later Panna was the capital chosen by Bundela Rajput leader Chhatar Sal, the founder of Panna State, after leading a revolt against the Mughal Empire. He established an alliance with the Maratha Peshwa and made Panna his capital. After conquering Mahoba in 1680 Chhatar Sal extended his rule over most of Bundelkhand. Upon his death in 1732, his kingdom was divided among his sons, with one-third of the kingdom going to his son-in-law, the Peshwa Baji Rao I.[3]

The Kingdom of Panna went to Harde Sah, the eldest son of Chhatar Sal. In the early 19th century, Panna became a princely state of British India, and gained control states of the states of Nagod and Sohawal. Raja Nirpat Singh assisted the British in the Revolt of 1857, and the British rewarded him with the title Maharaja.

Maharaja Madho Singh was deposed by the Viceroy in April 1902, after a commission found him guilty of poisoning his uncle, Rao Raja Khuman Singh, the previous year.[4]

Maharaja Mahendra Yadvendra Singh acceded to the Government of India on January 1, 1950, and the kingdom became Panna District of the new Indian state of Vindhya Pradesh. Vindhya Pradesh was merged into Madhya Pradesh on November 1, 1956.

The rulers of the state belonged to the Bundela dynasty of Rajputs. They were entitled to an 11-gun salute by the British authorities.[5]