Orchha State (also known as Urchha, Ondchha and Tikamgarh)[1] was a princely state of the Bundelkhand region of British India. It was located within what is now the state of Madhya Pradesh.

The Chaturbhuj Temple was built, during the time of Akbar, by the Queen of Orchha,[2] while the Raj Mandir was built by Madhukar Shah during his reign, 1554 to 1591.[3] In 1811, during the period of Company Rule in India, it became part of the Bundelkhand Agency within the Central India Agency; after the independence of India in 1947, it acceded to the Union of India, in 1950. 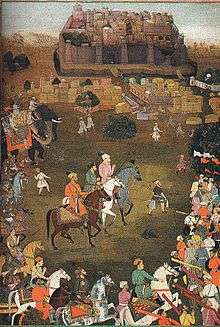 The capture of Orchha by invading Mughal forces (October 1635)

Memorial Chhatris of the ruler of Orchha, on the bank of the Betwa River 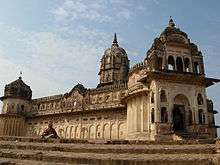 Orchha State was founded in 1501 AD[4] by the Bundela chief, Rudra Pratap Singh, who became its first king. He reigned between 1501-1531, during which time he built the fort at what is now the town of Orchha, on the banks of the river Betwa. He moved his capital from Garhkundar to that town in 1531 and died in the same year.[5][6]

Rudra Pratap Singh was succeeded by his son, Bharatichand, who died without leaving an heir in 1554 and was in turn succeeded by his younger brother, Madhukar Shah.[5] Both Bharatichand and Madhukar had to deal with attacks, organised under the Afghan Islam Shah Suri (r. 1545-53) and the Mughal Akbar (r. 1556-1605). Events involving the former were noted by the court poet Keshavdas and those involving Madhukar, who had to relinquish lands to Akbar in 1577 and 1588, were recorded in the Akbarnama. Madhukar's position had become so precarious in the 1570s that he agreed to Orchha becoming a tributary state and to enlistment of himself and his family in the service of the Mughal empire, but another near-contemporary historian, `Abd al-Qadir Bada'uni, records him as a rebel in 1583.[7]

During the rule of the Mughal emperor Jahangir, his vassal, Vir Singh Deo, was ruler of the Orchha area. His reign ended in either 1626[8] or 1627[3] and it was during this period that Orchha reaches its height, and many extant palaces are a reminder of its architectural glory, including the Jahangir Mahal (built ca. 1605) and Sawan Bhadon Mahal.[9]

In the early-17th century, Raja Jhujhar Singh rebelled against the Mughal emperor Shah Jahan, whose armies devastated the state and occupied Orchha from 1635 to 1641. In that latter year, the conquerors installed the former raja's brother on the throne. Orchha was the only Bundela state not entirely subjugated by the Marathas in the 18th century.[8]

The town of Tehri, Tikamgarh, about 52 miles (84 km) south of Orchha, became the capital of Orchha state in 1783, and is now the district town; Tehri was the site of the fort of Tikamgarh, and the town eventually took the name of the fort.[1]

During the British era

Hamir Singh, who ruled from 1848 to 1874, was elevated to the style of Maharaja in 1865. During his reign the allied forces of Orchha and Datia invaded Jhansi in 1857 intending to divide the Jhansi territory between them. However they were defeated by Rani Lakshmibai's army and her allies in August 1857. (She intended at this time to hold Jhansi on behalf of the British who had no forces there at the time.)[10] Maharaja Pratap Singh (born 1854, died 1930), who succeeded to the throne in 1874, devoted himself entirely to the development of his state, himself designing most of the engineering and irrigation works that were executed during his reign.

Vir Singh, Pratap Singh's successor, merged his state with the Union of India on 1 January 1950. The district became part of Vindhya Pradesh state, which was merged into the state of Madhya Pradesh in 1956. 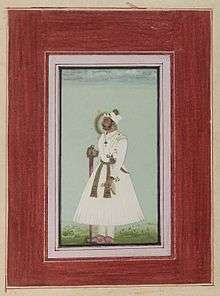 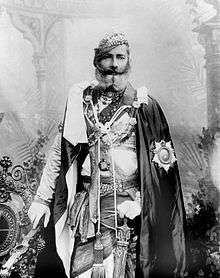 Prior to Company Rule, the rulers of Orchha all held the title of Raja. They were:

During the British era, initially under Company Rule and then as a part of the British Raj, the title of Raja was in use until 1865, when it was replaced with that of Maharaja. The rulers were: 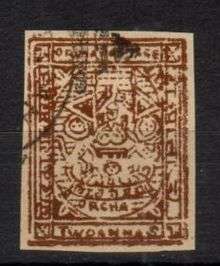 Postage stamps for the state were prepared for use in 1897 but were never issued. The first Orchha State stamps were issued in 1913 (half-anna and one anna); in 1914 there was another issue of four stamps (half-anna to four annas). The third issue was in 1939 when a range of stamps bearing the maharajah's portrait were issued which included denominations from half-anna to eight annas and one rupee to ten rupees.[14]

Separate stamps were discontinued on 30 April 1950 after the state was merged with the Union of India early that year.

Orchha minted coins in copper and silver. The currency was known as Gaja Shahi because it most commonly bore the symbol of a mace (gaja) on the reverse. The mace symbol was imitated on coins issued by Datia State.[8]

This article is issued from Wikipedia - version of the 11/21/2015. The text is available under the Creative Commons Attribution/Share Alike but additional terms may apply for the media files.