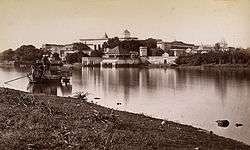 The Govindgarh palace of the Maharaja of Rewa in 1882

Flag of Rewa State in the 19th century[1] 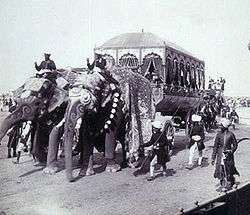 Elephant Carriage of the Maharaja of Rewa, Delhi Durbar of 1903.

Rewa State, also known as Rewah, was a princely state of India, surrounding its eponymous capital, the town of Rewa.[2]

With an area of about 13,000 mi², Rewa was the largest princely state in the Bagelkhand Agency and the second largest in Central India Agency. The British political agent for Bagelkhand resided at Satna, on the East Indian railway. The Bagelkhand Agency was dissolved in 1933 and Rewa was placed under the authority of the Indore Residency.

Rewa State was bordered to the north by the United Provinces, to the east by Bengal and to the south by the Central Provinces. On the west, it met other princely states of Bagelkhand, namely Maihar, Nagod, Sohawal, Kothi Baghelan and Panna. The south of the state was crossed by the Bengal–Nagpur railway, the branch between Bilaspur and Katni which taps the Umaria coal-field.

Rewa is also famous for its white tigers; the first one, nicknamed Mohan, was caught in Rewa. Sitar virtuoso Pandit Ravi Shankar studied music from Alauddin Khan of Maihar, who migrated to Rewa State from Bengal.

According to tradition Rewa state was founded around 1140. On 5 October 1812 it became a British protectorate. Rewa state became part of the British India administration between 1 April 1875 and 15 October 1895.[3]

The Rajas of Rewa were of the Baghela(vaghela) branch of the Baghela Rajput[4] or Chalukya clan (Hindu Agnivanshi clan of Indian stock), and claimed descent from the founder of the Anhilwara (Patan) dynasty in Gujarat.They ruled from Bandhavgarh under the first ruler Raja Vyaghradev who was direct descendant of famous Gujarati King and Warrior Vir Dhawal . In the mid 1550s, Raja Ramachandra Singh Baghela maintained a musically talented court, including the legendary Tansen. In 1617, Maharaja Vikramaditya Singh moved his capital to Rewa. Maharaja Martand Singh was the last ruler of Rewa who acceded to the Union of India after the country became India. Birbal was born in Sidhi District of Rewa Kingdom. The Emperor Sher Shah Suri, died fighting with Ruler of Rewa Vir Singh at Fort of Kalinjar.

Rewa is the first princely state in India to declare Hindi as a national language in times of Maharaja Gulab Singh. He is also credited for declaring the first responsible government in modern India, providing citizens of Rewa state a right to question monarch's decision. The state came under British paramountcy in 1812 and remained a princely state within the Raj until India's independence in 1947.

During the long minority of Raja Venkat Raman Singh (b. 1876, ruled 1880-1918), the administration of the state was reformed. In 1901 the town boasted a high school, a "model jail" and two hospitals: the Victoria hospital and the Zenana hospital. However, it was still adjudged among the most backward areas of the country by V.P. Menon, after he visited the state in 1947.

Upon India's independence in 1947, the maharaja of Rewa acceded unto the dominion of India. Rewa later merged with the Union of India and became part of Vindhya Pradesh, which was formed by the merger of the former princely states of the Bagelkhand and Bundelkhand agencies. Rewa served as the capital of the new state.

In 1956, Vindhya Pradesh was merged with other nearby political entities to form the Indian constitutive state of Madhya Pradesh. The Maharaja's Raj [i.e. colonial]-era palace has now been converted into a museum.

In February 2007, the most extensive book on history of Rewa was published. Published by Oxford University Press, it is named "Baghelkhand, or the Tigers’ Lair" and is authored by Dr D.E.U Baker, ex H.O.D, History Department, St Stephen's College, New Delhi after 12 years of gruelling research in which the author consulted numerous sources of information for Rewa's history like the state and national archives as well as old records of Rewa state.

Bagheli is local language of Rewa.

The predecessor state was founded c. 1140. The chiefs of Rewa were Baghel Rajputs descended from the Solanki clan which ruled over Gujarat from the tenth to the 13th century. Vyaghra Deo, brother of the ruler of Gujarat, is said to have made his way into northern India about the middle of the 13th century and obtained the fort of Marpha, 18 miles north-east of Kalinjar. His son Karandeo married a Kalchuri (Haihaya) princess of Mandla and received in dowry the fort of Bandhogarh which, until its destruction in 1597 by Akbar was the Baghel Capital. In 1298, Ulugh Khan, acting under orders of emperor Alauddin drove the last Baghel ruler of Gujrat from his country and this is believed to have caused a considerable migration of the Baghels to Bandhogarh. Until the 15th century the Baghels of Bandhogarh were engaged in extending their possessions and escaped the attention of the Delhi kings, in 1498-9, Sikandar Lodi failed in his attempt to take the fort of Bandhogarh.[5][6]