The Volkswagen Touareg (German pronunciation: [ˈtuːaʁɛk]) is a mid-size luxury crossover SUV produced by German automaker Volkswagen since 2002 at the Volkswagen Bratislava Plant. The vehicle was named after the nomadic Tuareg people, inhabitants of the Saharan interior in North Africa.[1]

The Touareg (internally designated Typ 7L) was a joint venture project developed by Volkswagen Group, Audi and Porsche. The goal was to create an off-road vehicle that could handle like a sports car. The team, with over 300 people, was led by Klaus-Gerhard Wolpert and based in Weissach, Germany. The result of the joint project is the Volkswagen Group PL71 platform, shared by the Touareg, the Audi Q7 and the Porsche Cayenne, although there are styling, equipment, and technical differences between those vehicles. The Touareg and Porsche both seat five, while the Q7's stretched wheelbase accommodates a third row for seven passengers. The Volkswagen Touareg is built at the Volkswagen Bratislava Plant in Bratislava, Slovakia, alongside the Audi Q7 and Porsche Cayenne.

Due to the demand, and the exchange rates of euros against the US dollar, as well as different pricing and environmental policies in the USA, the V6 and V8 engine variants make up most of Volkswagen's American Touareg offering. Compared to other Volkswagen-branded vehicles sold in the USA which are aimed at the mass market, Touaregs came in the more upscale trims and placed in competition with other luxury crossover SUVs from BMW and Mercedes-Benz. However, a limited number of the V10 TDI Turbocharged Direct Injection (TDI) diesel engines was available in the 2004 model year (before being pulled for environmental reasons). They were brought back to the United States for the 2006 as a "Tier I emissions concept (43 state emissions)".[2]

The Touareg comes as standard with a four-wheel drive system. It has an automatic progressively locking centre differential (with manual override), and a "low range" setting that can be activated with in-cabin controls. Options to make the vehicles more capable off-road include an available 4-wheel Adaptive Air Suspension (plus Continuous Damping Control) which can raise the car's ride height on command, and an interior switch allowing the rear differential to be manually locked. Its load level ground clearance is at 6.3 in (160 mm), Off Road Level is at 9.6 in (244 mm), and Xtra clearance of 11.8 in (300 mm).[2] 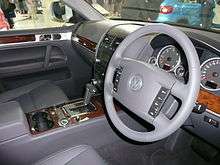 A 2007 Volkswagen Touareg 2 V10 TDI towed a Boeing 747 airliner in 2006. The Touareg was marketed as being the most capable off-roader to date. Several 2007 First Generation Touaregs were given to the staff, cast and crew of King Kong. Volkswagen subsequently offered for sale the Touareg Kong special edition, which featured upgraded specification and King Kong badging on the B-pillars.[3] Return as new on 2016 as the third generation of Volkswagen Touareg.

The 6.0-litre double overhead camshaft (DOHC), 48-valve W12 engined version was initially intended to be a limited-edition model, with just 500 units planned to be produced; around 330 were slated for sale in Saudi Arabia, with the remainder sold in Europe. Some of those W12 Touaregs were sold in China, but the number of sold is unknown. No sales in the United States were made. Eventually, the W12 model became an ordinary model without any production restrictions. It is estimated to reach 100 kilometres per hour (62.1 mph) in 5.9 seconds.[4]

The V10 TDI was offered in the United States for a limited time in 2004, but emissions regulations forced it off the market for a temporary period.[5]

The V10 TDI returned to the U.S. market as 2006 model year vehicle in five states. Later US models went on sale in 2006, which was compliant with 50 states emission with Ultra-low sulfur diesel and particulate filter.[6] Stricter California Air Resources Board (CARB) emissions standards resulted in the V10 TDI being cancelled again in the United States.[7] The V10 engine has since been replaced by a V6 TDI engine that meets the CARB minimum emission requirements for the 2009 model year. However in 2015 it was discovered that these V6 engines were not meeting the CARB emissions requirements and were part of the Volkswagen emissions scandal.

Fifth Gear used this version for testing if it can tow a Boeing 747. 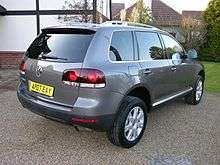 The Touareg's first facelift was unveiled at the 2006 Paris Motor Show,[8] and later in 2007 New York Auto Show as a 2008 model.[9] It now features the shield grille from others in the Volkswagen Passenger Cars range. The updated Touareg has more than 2300 redesigned parts and boasts some new technological features:

The 2007 Touareg, alongside an already lengthy options list, could be equipped with a driving dynamics package, a rollover sensor, a 620 watt Dynaudio sound system, and redesigned comfort seats. All diesel versions now have the diesel particulate filter standard.[10]

In the US and Canada, the facelifted Touareg was marketed as the Touareg 2 for the 2008-2010 model year, reverting to simply Touareg in 2011.

The Touareg R50 is the third Volkswagen after the Golf and Passat to be given the 'R' treatment by Volkswagen Individual GmbH. The R50 global launch was at the 2007 Australian International Motor Show.

It is a version of V6 TDI with Selective Catalytic Reduction (SCR) system, replacing V10 TDI in US and Canada. The Touareg contains a 4.5 US gallons (17 l; 3.7 imp gal) tank in the rear of the vehicle underneath the spare tyre which stores the AdBlue solution. It is estimated that this tank will need to be replenished every 6,000–10,000 miles (9,700–16,100 km). The Touareg does not include NOX storage catalyst found in Jetta Clean Diesel TDI due to its heavy weight.[13]

Although sales of production version was planned in North America in 2008, it did not start until 2009.

Sander Kuiken, Technical development diesel application, Volkswagen AG was one of the engineers that worked on the AdBlue system created by Volkswagen, BMW, and Mercedes-Benz. Kuiken talked about the difference between the VW Touareg diesel and gasoline vehicles.[16]

In Canada and the USA, ads showed the Touareg being capable of feats that other Volkswagen cars could not accomplish, such as going right through a snowbank while a New Beetle got stuck.

A Touareg V10 TDI pulled a Boeing 747 as part of an advertising campaign, which holds the world record for the heaviest load towed by a passenger car.[19]

As part of the Touareg 2 launch campaign coinciding with The Bourne Ultimatum movie premiere, Volkswagen launched an interactive stunt simulator that allows fans to play out their own stunts online. Users can maneuver any of six different VW models through different explosions, while altering vehicle speeds, props, sound effects and camera angles to make that perfect scene.[21] 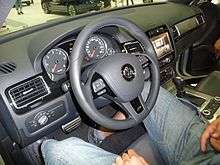 The new Touareg features a world first in automotive headlight technology: the "glare-free high beam".[26] ("Dynamic Light Assist"[24] at Volkswagen). Unlike an adaptive high beam system, the newest system continually and gradually adjusts not only the range of the high-beam, but also its pattern.[27] The beam pattern changes its direction continually so that vehicles in front are not being illuminated, while the area surrounding them is being constantly illuminated at high beam intensity.[28] 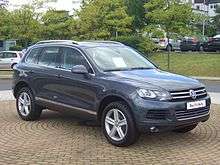 The vehicles were unveiled at the 2011 Qatar Motor Show.[36]

As part of Touareg product launch in China, a 3-part, 15-minute total movie named A Journey Beyond (锐·享征程) was produced. The movie was produced by DDB Guoan,[42][43] and directed by Lu Chuan.[44][45][46] The film itself was nominated as finalist in China Longxi awards under the FILM – Craft: Best editing category.[47]

The Insurance Institute for Highway Safety crash-tested the Touareg, and presented the following results (ratings from 'poor' to 'good'):[51]

In the 2006 Dakar Rally, Volkswagen driver Giniel de Villiers and co-driver Tina Thörner claimed second spot the highest ever for a diesel model in the new Race Touareg 2. It has a shorter wheelbase than the original Race Touareg, as well as increased visibility.[57] For the 2007 Dakar Rally, VW driver Mark Miller and Ralph Pitchford drove the Race Touareg 2 to 4th position overall. In the 2008 Central Europe Rally, Carlos Sainz drove his Race Touareg 2 to victory.[58] Finally, in the 2009 edition of Rally Dakar, Volkswagen achieved a one-two result. Giniel de Villiers and co driver Dirk von Zitzewitz won the race ahead of Mark Miller and Ralph Pitchford. With just two days to go, Carlos Sainz crashed out after dominating the rally for several days, thus preventing Volkswagen from making it a one-two-three result.[59]

A 1/32 slot car model of the Red Bull-sponsored Touareg, which is designed to run on the company's RAID track (which simulates off-road racing) is available from Ninco.

On September 20, 2015 a Touareg V6 TDI driven by Rainer Zietlow, Marius Biela and Sam Roach completed the run of 19,000 km from Cape Agulhas, the southernmost point of Africa, to the North Cape (Nordkapp) of Norway in a world record time of 9 days, 4 hours, 9 minutes and 27 seconds.[60]

For the record run a stronger suspension was added, larger tires, a roll-cage and extra strong Hella head lights as well as additional tanks for a total range of 3000 km. The 244 HP V6 TDI engine as well as other mechanical parts such as gearbox and drive shafts were standard.