The 136.796-mile (220.152 km) Wendell H. Ford Western Kentucky Parkway is a controlled-access highway running from Elizabethtown, Kentucky to near Eddyville, Kentucky. It intersects with Interstate 65 at its eastern terminus, and Interstate 24 at its western terminus. It is one of nine highways that are part of the Kentucky parkway system. The road was renamed for Wendell H. Ford, a former Kentucky governor and United States Senator, in 1998. Previously, it was simply the Western Kentucky Parkway, and often called the "WK Parkway" because of the abbreviation once used on its signs. The Western Kentucky Parkway carries the unsigned designation of Kentucky Route 9001 (WK 9001) for its entire length. The portion from I-24 to the Pennyrile Parkway also carries the signed designation of Interstate 69. The section signed as I-69, the parkway is signed as former.[2]

The parkway passes the cities of Clarkson, Leitchfield, Caneyville, Beaver Dam, Central City, Madisonville, Dawson Springs, Princeton, and Eddyville. At exit 77 near Beaver Dam, the parkway intersects with the William H. Natcher Parkway, which goes from Bowling Green to Owensboro. At exit 38 near Madisonville, the parkway intersects with the Edward T. Breathitt Pennyrile Parkway, which runs from Hopkinsville to Henderson.

The toll plazas were, from west to east:

A service area featuring a gas station and an Arby's restaurant is located in the median, just west of the interchange with the Natcher Parkway. It is the only such service area in the entire Kentucky parkway system. (Two other service areas were once located on the old Kentucky Turnpike, a toll road from Louisville to Elizabethtown that predated the parkway system and later became part of I-65; they were closed when toll collection ended and the turnpike was officially absorbed into the Interstate Highway system.)

The parkway was originally a toll road, as were all Kentucky parkways. State law requires that toll collection ceases when enough tolls are collected to pay off the parkway's construction bonds; that occurred in 1987. It is constructed similar to the Interstate Highway system, though sections do not measure up to current Interstate standards. [4]

On May 15, 2006, the section between the Breathitt (Pennyrile) Parkway at Madisonville and Interstate 24 became part of future Interstate 69; crews installed "Future I-69 Corridor" signs along this segment during the last week of May 2006.

From the Pennyrile Parkway in Madisonville to Interstate 24, the Western Kentucky Parkway officially became part of Interstate 69 with the signing of federal highway legislation (see below) on June 6, 2008. To reflect this decision, Kentucky transportation officials have erected "Future I-69" signs between I-24 and the Pennyrile Parkway. Because Kentucky is using an existing expressway for I-69, highway officials avoided years of costly environmental studies required by other states because the upgrades are being performed within the footprint of the existing highway.

On May 2, 2008 the House of Representatives passed HR 1195 (SAFETEA-LU Technical Corrections Act of 2008) which designates the Pennyrile Parkway from Henderson to Madisonville, and the Western Kentucky Parkway from Madisonville to I-24 at Eddyville as I-69. It further designates the Audubon Parkway as a future spur (I-X69) of I-69 once necessary upgrades are completed. President George W. Bush signed the bill on June 6, 2008.[5][6][7][8]

In September 2011, Governor Steve Beshear announced an agreement with the Federal Highway Administration (FHWA), officially designating this section as I-69, effective September 30, 2011. The Kentucky Transportation Cabinet unveiled I-69 signs along the route on October 25, 2011.[9] 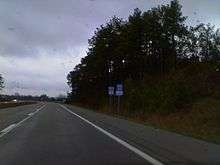 Western Kentucky Parkway co-signed with I-69 near Dawson Springs, KY

Signage and mile markers were replaced on the 38-mile (61 km) stretch of the Western Kentucky Parkway in mid-December 2012.[10]

In a project that began in 2014 and ended in late 2015, the interchange between the Western Kentucky Parkway and the Pennyrile Parkway was extensively modified. The project involved building a new curve in the northwest quadrant (for the eastbound-to-northbound and southbound-to-westbound maneuvers) to satisfy I-69's transfer between the Western Kentucky and the Pennyrile Parkways. Previously, I-69 through traffic had to exit through a tight, substandard cloverleaf interchange.

According to the 2012 State Highway Map issued by the Kentucky Transportation Cabinet, exits between I-24 and the Pennyrile Parkway have been renumbered to correspond with the mileage of I-69 through the state.[11]

Template:Attached KML/Western Kentucky Parkway
KML is from Wikidata
This article is issued from Wikipedia - version of the 9/23/2016. The text is available under the Creative Commons Attribution/Share Alike but additional terms may apply for the media files.