Hodgenville is a home rule-class city[1] in LaRue County, Kentucky, United States. It is the seat of its county.[2] Hodgenville sits along the North Fork of the Nolin River. The population was 3,206 at the 2010 census. It is included in the Elizabethtown metropolitan area. 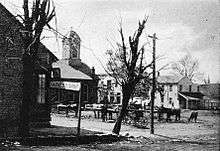 An English-born Virginian, Robert Hodgen purchased 10,000 acres of land in the vicinity. In 1789, after the American Revolutionary War, when settlers started moving west into Kentucky, he built a mill at the site. After his death, the community that developed around it was called Hodgenville upon the petition of his widow and children. The United States post office at the site, however, was known as Hodgensville from 1826 to 1904.[3]

The city was formally incorporated by the state assembly on February 18, 1836.[4]

The Abraham Lincoln Birthplace National Historical Park labels the replica cabin, which was built thirty years after his death, the "Traditional Lincoln Birthplace Cabin." The significance of the two Hodgenville sites (birthplace and boyhood home) are found in the setting. Preservation of these two national sites allows visitors to see the landscape of the earliest period of Abraham Lincoln's life. The Lincoln Museum is opened for visitors downtown and the bronze Abraham Lincoln Statue stands at the town square.[7]

According to the United States Census Bureau, the city has a total area of 1.7 square miles (4.4 km2), all land.

The climate in this area is characterized by hot, humid summers and generally mild to cool winters. According to the Köppen Climate Classification system, Hodgenville has a humid subtropical climate, abbreviated "Cfa" on climate maps.[8] 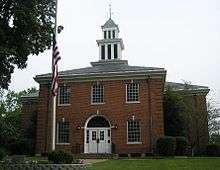 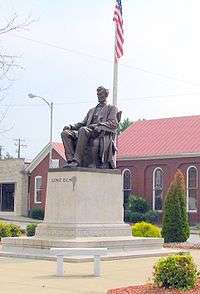 Lincoln's statue in the town square

There were 1,235 households out of which 29.6% had children under the age of 18 living with them, 42.3% were married couples living together, 18.1% had a female householder with no husband present, and 36.7% were non-families. 34.1% of all households were made up of individuals and 17.4% had someone living alone who was 65 years of age or older. The average household size was 2.17 and the average family size was 2.76.