Not to be confused with Hardin, Kentucky.

Hardin County is a county located in the U.S. state of Kentucky. Its county seat is at Elizabethtown.[1] The county was formed in 1792.[2]

Hardin County is known for being the birthplace of former U.S. president Abraham Lincoln, though the location is now part of neighboring Larue County.

Hardin County was established in 1792 from land given by Nelson County. Hardin was the 15th Kentucky county in order of formation.[4] The county is named for Col. John Hardin, a Continental Army officer during the American Revolution and a brother of the Capt. William Hardin who founded Hardinsburg.[5]

Courthouse fires destroyed county records in 1864 and again in 1932. The present courthouse dates from 1934.[6]

Hardin County borders nine counties, more than any other county in Kentucky.

There were 39,853 households out of which 37.2% had children under the age of 18 living with them, 53.3% were married couples living together, 12.9% had a female householder with no husband present, 4.7% had a male householder with no wife present, and 29.0% were non-families. 24.5% of all households were made up of individuals and 8.0% had someone living alone who was 65 years of age or older. The average household size was 2.57 and the average family size was 3.04.

The economy of Hardin County is largely dominated by the adjacent Fort Knox Military Installation.[14] 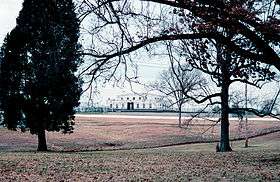 The Army Human Resource Center, the largest construction project in the history of Fort Knox, began in November 2007. It is a $185 million, three-story, 880,000-square-foot (82,000 m2) complex, sitting on 104 acres (0.42 km2). As many as 2,100 new permanent human resources, information technology, and administrative white-collar civilian professionals will be working there.

Officials expect that as many as 12,000 people, including the families of soldiers and civilian workers to relocate to the area as a result of the Fort Knox realignment.

Approximately $1 billion in federal and state construction funds are scheduled for Fort Knox, and in the surrounding areas by the end of 2011.

Gov. Steve Beshear of Kentucky announced the creation of a task force to help Hardin County, and the surrounding counties prepare for the Fort Knox realignment. The group is "designed to meet specific needs" in areas such as transportation, economic development, education, water and sewer availability, and area wide planning.

Hardin County is classified by the Kentucky Department of Alcoholic Beverage Control (ABC) as both a moist county and a "limited dry county". Under ABC terminology, a "moist county" is an otherwise dry county in which at least one city has voted to allow sale of alcoholic beverages for off-premises consumption. The word "limited" means that at least one city within the county, or the county as a whole, has voted to allow alcohol sales in qualifying restaurants. In the case of Hardin County, Elizabethtown, Radcliff, and Vine Grove all voted to allow off-premises sales in October 2011. West Point has voted to allow sale of alcohol by the drink in restaurants that seat at least 50 and derive at least 70% of their revenue from food (including non-alcoholic beverages).

The Department of Defense Education Activity (DoDEA), through its Domestic Dependent Elementary and Secondary Schools subagency, operates four schools on the Fort Knox base for military dependents. DDESS has one elementary school (grades K-5), one intermediate school (1-5), one middle school (6-8), and one high school (9-12) on base. After the Army inactivated a combat brigade, resulting in the relocation of 3,500 soldiers and their families from the base, DoDEA closed four other schools—three elementary schools and one intermediate school—at the end of the 2013–14 school year. At that time, DoDEA also restructured the grades at all of the remaining schools except the high school.[17]

A new $16-million Fort Knox High School, a two-story, state-of-the-art facility that united the existing vocational school with the current gymnasium, creating a connected campus was completed in 2008, with dedication on August 7, 2008. The remaining parts of the old high school were then demolished.[18]