Muhlenberg County (/ˈmjuːlənbərɡ/) is a county located in the U.S. Commonwealth of Kentucky. As of the 2010 census, the population was 31,499.[1] Its county seat is Greenville.[2] The county was founded in 1798[3] and named for General Peter Muhlenberg, a colonial general during the American Revolutionary War.[4]

Muhlenberg County was established in 1798 from land given by Logan and Christian counties. Muhlenberg was the 34th Kentucky county in order of formation.[5]

The two primary aquatic features of Muhlenberg County are the Green River and Lake Malone. The northern portion of the county is typically gently rolling hills, river flatlands, and some sizeable bald cypress swamps along Cypress Creek and its tributaries. The southern portion consist of rolling hills with higher relief. Many of the valleys in the southern part of the county are rather deep and in places and somewhat rugged. This area is also known for many sandstone formations and some small limestone caves, of which only two known limestone caves are thought to be in the county, both in the far southern region. A number of faults cross the county at roughly the half-way point between neighboring counties to the north and south. Coal is a large natural resource found in the central part of the county. Most deposits reside deep underground, though in the past deposits were closer to the surface. In former years, it was common to see machines such as the "Big Brother" Power Shovel (pictured on the right) throughout the county. During the 1970s and early 1980s, Muhlenberg County was the state leader in Coal Production and sometimes the top coal producer in the United States. This was the subject of the song "Paradise". 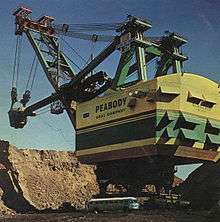 The Bucyrus Erie 3850-B Power Shovel named "Big Brother" went to work next door to Paradise Fossil Plant for Peabody Coal Company's Sinclair Surface Mine in 1962. When it started work it was received with grand fanfare and was the Largest Shovel in The World with a bucket size of 115 cubic yards. After it finished work in the mid-1980s, it was buried in a pit on the mine's property. It remains there still today.

Muhlenberg County's predominate rock type is sandstone. As one travels south and gets closer to the southern border, one begins to notice limestone outcroppings become more numerous and much closer to the surface. Early attempts at extracting iron ore were tried at Old Airdrie on the banks of the Green River and at Buckner Furnace south of Greenville, Kentucky. Both operations were extant in the late 19th century and early 20th century; neither enjoyed long-term success..

The 300 miles (483 km)-long Green River is a tributary of the Ohio River. It provides a commercial outlet for goods (primarily coal) to be shipped from the county to the major trade centers along the Mississippi River. Muhlenberg County and the Green River first entered the popular consciousness through the John Prine song "Paradise", about a now-defunct coal-mining town.

Spanning 788 acres (3.19 km2) near the small town of Dunmor in southern Muhlenberg County, Lake Malone provides a locale for water recreation such as swimming, boating, and fishing. Lake Malone and the surrounding hardwood forest form Lake Malone State Park. Lake Malone is maintained by the Kentucky Department of Fish and Wildlife. The lakes surface extends into two neighboring counties. The lake is known for its sandstone cliffs and natural sandstone formations along the lake shore including a natural bridge. The bridge itself is not in the boundaries of the state park.

Muhlenberg County has been a major coal-producing region for the United States for many years; during most of the 1970s, Muhlenberg County annually produced more coal than anywhere else in the world. Although coal mining in the county waned in the late 1980s and early 1990s, as the 21st century began, the coal-mining industry in Muhlenberg and surrounding counties began to expand again and has once again provided a significant number of jobs in the region. One reason for this is the willingness of utility operators to install flue gas cleaning systems so that bituminous coal can be burned much cleaner than in decades past. Another reason is that most coal from the western US has a lower BTU content.

Muhlenberg County is the home of Kentucky's first commercial coal mine. That mine opened in 1820 as the "McLean Drift Bank". It was located along the Green River in the former village of Paradise. The mine and its impact on the community are referenced in the John Prine song Paradise. Other major employers in Muhlenberg County have supplemented the coal industry or expanded in other areas of expertise. Major employers include: 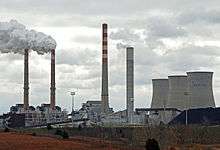 Paradise Fossil Plant sits close to the original site of the village of Paradise, Kentucky. The power plant is the second largest plant in the TVA Fossil Fuels Plant Inventory with a rated output of 2,630 megawatts. It is composed of three units. Units 1&2 are twin 740 MW units while Unit 3 is the largest Cyclonic Boiler Unit in the World rated at 1,150 MW.

In January 2006, the chambers of commerce from Central City and Greenville merged to form the Greater Muhlenberg Chamber of Commerce. The new, unified chamber consists of over 155 local businesses.[14]

Peabody Energy's new Thoroughbred Energy Plant, a coal-burning power generation facility expected to bring 450 permanent jobs to the area, is to be located in Central City.[15] The plant was projected to begin electricity generation sometime in 2007,[16] but a dispute over Peabody's air quality permit has halted construction plans.[17] The power plant plans have now been scrapped, as was a later partnership between Peabody Energy and ConocoPhillips Oil Company called, "Kentucky NewGas".[18]

On February 5, 2008, three communities in Muhlenberg County received major damage during the 2008 Super Tuesday tornado outbreak. These communities were Greenville, Powderly, and Central City. Three residents were killed outside Greenville when the EF-3 tornado struck.