Fofo went on a trial to Guizhou Zhicheng on 13 June 2013. However, he did not play in the friendly match against Guizhou Renhe since he had to come back to Hong Kong to handle some personal issues.[1] After an unsuccessful trail at Guizhou Zhicheng, Fofo is reportedly close to joining Harbin Yiteng.[2] On 8 July 2013, Fofo officially signed a six-month contract with Harbin Yiteng, becoming the second naturalised Hong Kong player, after his compatriot Godfred Karikari, to play in China League One.[3] 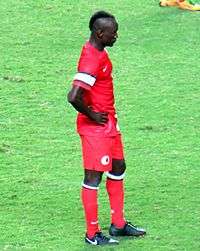 Fofo has spent more than seven years playing football in Hong Kong. He received his Hong Kong Permanent Identity Card on 7 February 2011. He successfully obtained his Hong Kong passport in May 2013 and thus making him eligible to play for Hong Kong. He received his first international cap for the match against Philippines but he didn't come off the bench eventually. He made his debut for Hong Kong on 6 September 2013 against Myanmar.[5]