This is a Chinese name; the family name is Lam.

Lam Ka Wai (Chinese: 林嘉緯; Jyutping: lam4 gaa1 wai5; born 5 June 1985 in Hong Kong) is a Hong Kong professional footballer.He is one of the best of Hong Kong's next generation of footballers. He is known for his ability to pass and for his shooting technique. Lam Ka Wai currently plays as a midfielder for Kitchee in Hong Kong Premier League.

Lam Ka Wai lived away from his parents and spent his childhood years playing football. During his school life, he had showed his talent in soccer. He could complete with high school teammate while aged 15. He was studying in Concordia Lutheran School and after Form 3 he ceased his studies to pursue a football career.[1]

He started his football career at Yee Hope FC's youth academy, in 2002 he joined Rangers, but was loaned to Double Flower, on a monthly salary of just HK$1,500 (US$192), to train under coach Chiu Chung Man.[2] He was then loaned further to Kitchee when he was just 17.[1] In 2004 he returned to Rangers and began to impress. He was selected for the Hong Kong in 2005 and scored on his debut. But he suffered a severe ankle ligament injury in 2005 and was sidelined for most of the league season.[1]

He joined Kitchee in 2008 and along with Lo Kwan Yee has been the mainstay of the club since. At Kitchee he plays as the midfield playmaker, wearing the no. 10 shirt.

In June 2010, Kitchee reported to the Hong Kong Football Association that Fourway Rangers made an illegal approach for his services.[3]

In the 2010-11 Hong Kong First Division League season, he scored 9 goals and was a key member of the team that overcame South China AA by one point to win the league title. This was the first title for Kitchee in 47 years, gaining the club the rights to play in the 2011 Barclays Asia Trophy and 2012 AFC Cup.

After the season ended, Lam Ka Wai played in a local soccer game without Kitchee's consent and fractured his fibula, making him unable to play for either Hong Kong in the 2014 FIFA World Cup Asian qualification matches or for Kitchee in the 2011 Barclays Asia Trophy. For this reason, Kitchee stripped him of his vice captaincy.[6]

On 19 April 2012, Lam Ka Wai received the Most Valuable Player for March 2012 award from the Hong Kong Sport Press Association, after helping the club win the 2011-12 Hong Kong League Cup.[7]

On 29 July 2013, in an exhibition match against English Premier League giants Manchester United at the Hong Kong Stadium, Lam Ka Wai scored by curling the ball into the top corner from outside the box on 53 minutes, giving reserve United keeper Ben Amos no chance. But Kitchee lost the match 2–5.[8] 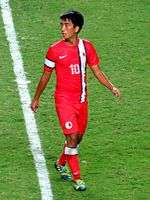