This article is about the men's team. For the women's team, see Vietnam women's national football team.

In the FIFA World Rankings, Vietnam's highest standing was in the first release of the figures, in September 1998, at 84th. The team is currently ranked 129th in the World, 18th in Asia and 2nd in Southeast Asia by FIFA (24 November 2016). During the late 1950s, known by the name South Vietnam national football team it was one of the four strongest teams in Asia and advanced into the final round of 1956 AFC Asian Cup, 1960 AFC Asian Cup, finishing 4th both times. The team also won 10th Merdeka Tournament in Malaysia, 1966.

Football was introduced to Vietnam in 1896 by the French. It was first introduced in Cochinchina (Nam Kỳ); it later spread to other parts of Vietnam. The Vietnamese learned the game from the French before creating their own teams. On 20 July 1908, the first Vietnamese football teams with Vietnamese players had their first match where Phú Mỹ team defeated team Chợ Đũi with the score of 2–0. In 1928, Vietnam picked out the best team to compete in their first tournament in Singapore.

The North Vietnam football team in 1956.

The North team was not very active and played only against other communist and pro-communist countries from 1956 to 1966. They had their first match against China PR where they lost 5–3 under head coach Truong Tan Buu. They participated in the first GANEFO competitions at Indonesia in 1962 and Cambodia in 1966.

The North team was the national team of Democratic Republic of Vietnam between 1945 and 1975. The team ceased to exist when the North and South regions combined into the Socialist Republic of Vietnam. Most of North Vietnam's international games were played against other socialist countries.

The South team (Vietnamese: Đội tuyển túc cầu quốc gia Việt Nam Cộng hòa) was the national team of South Vietnam controlled by Vietnam Football Association (now Vietnam Football Federation) between 1949 and 1975. It took part in the first two Asian Cups finals (1956 and 1960), finishing 4th both times. They won the first SEA games in 1959 in Thailand. The team also entered qualification for the 1974 FIFA World Cup. They played their last game against Malaysia in 1975 where they lost 3–0.

The only World Cup which South Vietnam entered and played was the 1974 tournament in West Germany. They were placed in Zone A of the AFC and OFC qualification in Seoul, South Korea. On 16 May 1973 they beat Thailand 1–0 to qualify for Group 1. On 20 May South Vietnam lost their opening game 4–0 to Japan and four days later they lost 1–0 to Hong Kong and were eliminated. Hong Kong and Japan advanced but neither got any farther, losing play-offs for the next round to South Korea and Israel respectively.

Vietnamese professional football league was launched in 1980 to redevelop Vietnamese football after a long period of civil war. V-League was the official name used since 2000–2001 season.

The Vietnam national team was created once again and played their first match for 18 years against the Philippine in 1991 where they had a draw. In 1996, along with other Southeast Asian teams, Vietnam participated in the first Tiger Cup where they finished in third place. Vietnam hosted the second Tiger Cup in 1998 where they were defeated by Singapore in the final.

In 2007, Vietnam hosted the AFC Asian Cup for the first time along with Thailand, Indonesia, and Malaysia. They beat the UAE 2–0 and drew 1–1 with Qatar in the group stage. Though they lost 4–1 to Japan, they were still able to go on to quarter-finals and were the only host and only Southeast Asian team to reach quarter-finals. In the quarter final they were defeated by the later champion Iraq. 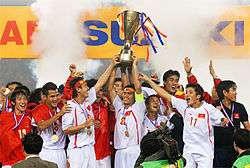 In the 2008 AFF Suzuki Cup, the successor to the Tiger Cup/ASEAN Football Championship, Vietnam defeated the defending champion Singapore 1–0 away from home in the semi-finals after a goalless draw in Hanoi. They also defeated Thailand 2–1 in the finals away from home. In the final 2nd-leg, Thailand scored the opening goal that leveled the aggregate score to 2–2, however Vietnam's star Le Cong Vinh scored a late equalized goal from Nguyen Minh Phuong's free kick, which gave Vietnam 3–2 aggregate win and its first title in the regional tournament.

Vietnam's current kit sponsor is Grand Sport. The contract started in January 2015 which will end by the end of December 2019.

Vietnam was also sponsored by Nike, Adidas and Li-Ning, the Chinese sport company. Li Ning kit was worn during their Aff Championship in 2008 which they won the title for the first time.

Vietnam kit provider is last sponsored by Adidas from 1996 to 2007.

The tradition home colour for the Vietnamese team is all red with yellow trim and the away colour is all white with red trim ever since they started the contract with Nike. With Adidas, it was just red and white. 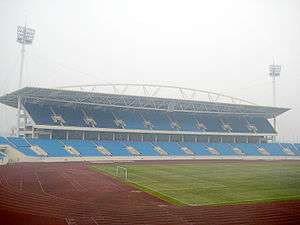 Mỹ Đình National Stadium (Vietnamese: Sân vận động Quốc gia Mỹ Đình) is a stadium in Mỹ Đình commune, Từ Liêm District, Hanoi, has a capacity of 40,192 seats and is the centerpiece of Vietnam's National Sports Complex. It was officially opened in September 2003 and was the main venue for the Southeast Asian Games later that year, hosting the opening and closing ceremony as well as the men's football and athletics events.[3]

The stadium is home to the Vietnam national football team, and hosts its home international matches.

Located in Từ Liêm District, 10 kilometres north-west of central Hanoi, the 40,000-seat stadium is the second biggest in the country and was built at a cost of US$53 million. Arched roofs cover the grandstands on the east and west sides of the arena, providing shelter for half of the seats.

The area provides training facilities for the teams with two football training grounds conveniently located next to the stadium.

Football at the Asian Games has been an under-23 tournament since 2002.

Football at the Asian Games has been an under-23 tournament since 2001.

The following players were called up for 2016 AFF Championship

The following players have also been called up to the Vietnam squad within the last 12 months.

Coaches by years since 1991

All–time record against all nations