Yale Divinity School is the divinity school of Yale University, in New Haven, Connecticut, preparing students for ordained or lay ministry, or for scholarly vocations. The school grants the Master of Divinity (M.DIV.) degree to graduates pursuing ordination, and the Master of Arts in Religion (M.A.R.) and Master of Sacred Theology (S.T.M.) degrees for graduates preparing for academic careers.

Congregationalist theological education was the motivation at the founding of Yale, and the professional school has its roots in a Theological Department established in 1822. The school had maintained its own campus, faculty, and degree program since 1869, and it has become more ecumenical beginning in the mid-19th century. Since the 1970s it has been affiliated with the Episcopal Berkeley Divinity School and has housed the Institute of Sacred Music, which offers separate degree programs. 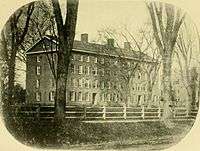 The Divinity College dormitory on the Old Campus, completed in 1836

Theological education was the earliest academic purpose of Yale University. When Yale College was founded in 1701, it was as a college of religious training for Congregationalist ministers in Connecticut Colony, designated in its charter as a school "wherein Youth may be instructed in the Arts & Sciences who through the blessing of Almighty God may be fitted for Publick employment both in Church & Civil State." A professorship of divinity was established in 1746. In 1817, the occupant of the divinity chair, Eleazar T. Fitch, supported a student request to endow a theological curriculum, and five years later a separate Yale Theological Seminary[2] was founded by the Yale Corporation.[3] In the same motion, Second Great Awakening theologian Nathaniel William Taylor was appointed to become the first Dwight Professor of Didactic Theology.[4] Taylor was considered the "central figure" in the school's founding, and he was joined in 1826 by Josiah Willard Gibbs, Sr., a scholar of sacred languages and lexicographer Chauncey A. Goodrich in 1839.[4] A dedicated student dormitory, Divinity College, was completed on the college's Old Campus in 1836, but the department had no permanent classrooms or offices until several years after the end of the American Civil War.

After a significant period of enrollment decline, the school began fundraising from alumni for new faculty and facilities.[4] Divinity Hall was constructed on the present-day site of Calhoun College between 1869 and 1871, featuring two classroom wings, a chapel.[4] Around the time of the new campus' construction came the arrival of new faculty, including James M. Hoppin, George Edward Day, George Park Fisher, and Leonard Bacon.[4] The first Bachelor of Divinity (B.D.) was conferred in 1867, and the department became a separate School of Divinity in 1869.[3] The school remained across from Old Campus until 1929, when a new campus was constructed on the northern edge of the university campus, at the top of Prospect Hill.

When the department was organized as a school in 1869, it was moved to a campus across from the northwest corner of the New Haven Green composed of East Divinity Hall (1869), Marquand Chapel (1871), West Divinity Hall (1871), and the Trowbridge Library (1881). The buildings, designed by Richard Morris Hunt, were demolished under the residential college plan and replaced by Calhoun College.[5]

In 1929, the trustees of the estate of lawyer John William Sterling agreed that a portion of his bequest to Yale would be used to build a new campus for the Divinity School.[6] The Sterling Divinity Quadrangle, completed in 1932, is a Georgian-style complex built at the top of Prospect Hill. It was designed by Delano & Aldrich and modeled in part on the University of Virginia.

A $49-million renovation of Sterling Divinity Quadrangle was completed in 2003. 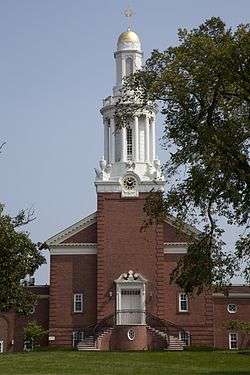