In the 1860s, the Copperheads comprised a vocal faction of Democrats in the Northern United States of the Union who opposed the American Civil War, wanting an immediate peace settlement with the Confederates. Republicans started calling anti-war Democrats "Copperheads", likening them to the venomous snake. Those Democrats accepted the label, reinterpreting the copper "head" as the likeness of Liberty, which they cut from Liberty Head large cent coins and proudly wore as badges.[1] Democratic supporters of the war, by contrast, were called War Democrats.

The Copperheads represented the more extreme wing of the "Northern Democrats". Notable Copperheads included two Democratic congressmen from Ohio: Clement L. Vallandigham and Alexander Long. Republican prosecutors accused some prominent Copperheads of treason in a series of trials in 1864.[2]

Copperheadism, a highly contentious, grass-roots movement, had its strongest base in the area just north of the Ohio River, as well as in some urban ethnic wards. Some historians have argued that it represented a traditionalistic element alarmed at the rapid modernization of society sponsored by the Republican Party, and that it looked back to Jacksonian Democracy for inspiration. Weber (2006) argues that the Copperheads damaged the Union war effort by opposing conscription (the "draft"), encouraging desertion, and forming conspiracies, but other historians say that the draft was already in disrepute and that the Republicans greatly exaggerated the conspiracies for partisan reasons.

Historians agree that the Copperheads' goal of restoring the Union with slavery was naive and impractical, for the Confederates refused to consider giving up their independence. The Copperheads became a major target of the Union (Republican) party in the 1864 presidential election. Copperhead support increased when Union armies did poorly, and decreased when they won great victories. After the fall of Atlanta in September 1864, Union military success seemed assured, and Copperheadism collapsed. 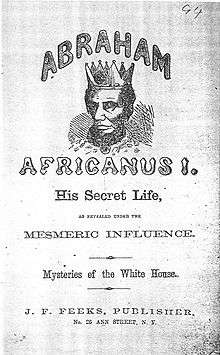 During the American Civil War (1861–1865), the Copperheads nominally favored the Union and strongly opposed the war, for which they blamed abolitionists, and they demanded immediate peace and resisted draft laws. They wanted President Abraham Lincoln and the Republicans ousted from power, seeing the president as a tyrant destroying American republican values with despotic and arbitrary actions.[4]

Some Copperheads tried to persuade Union soldiers to desert. They talked of helping Confederate prisoners of war seize their camps and escape. They sometimes met with Confederate agents and took money. The Confederacy encouraged their activities whenever possible.[5]

The Copperheads had numerous important newspapers, but the editors never formed an alliance. In Chicago, Wilbur F. Storey made the Chicago Times into Lincoln's most vituperative enemy.[6] The New York Journal of Commerce, originally abolitionist, was sold to owners who became Copperheads, giving them an important voice in the largest city. A typical editor was Edward G. Roddy, owner of the Uniontown, Pennsylvania Genius of Liberty. He was an intensely partisan Democrat who saw African Americans as an inferior race and Abraham Lincoln as a despot and dunce. Although he supported the war effort in 1861, he blamed abolitionists for prolonging the war and denounced the government as increasingly despotic. By 1864, he was calling for peace at any price.

John Mullaly's Metropolitan Record was the official Catholic newspaper in New York City. Reflecting Irish American opinion, it supported the war until 1863 before becoming a Copperhead organ. In the spring and summer of 1863, the paper urged its Irish working-class readers to pursue armed resistance to the draft passed by Congress earlier in the year. When the draft began in the city, working-class European Americans, largely Irish, responded with violent riots from July 13 to 16, lynching, beating, and hacking to death more than 100 black New Yorkers and burning down black-owned businesses and institutions, including an orphanage for 233 black children. On August 19, 1864, John Mullaly was arrested for inciting resistance to the draft.

Even in an era of extremely partisan journalism, Copperhead newspapers were remarkable for their angry rhetoric. Wisconsin newspaper editor Marcus M. Pomeroy of the La Crosse Democrat referred to Lincoln as "Fungus from the corrupt womb of bigotry and fanaticism" and a "worse tyrant and more inhuman butcher than has existed since the days of Nero … The man who votes for Lincoln now is a traitor and murderer … And if he is elected to misgovern for another four years, we trust some bold hand will pierce his heart with dagger point for the public good."[7] 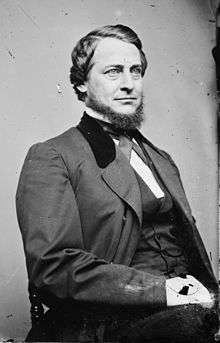 Clement Vallandigham, leader of the Copperheads, coined the slogan: "To maintain the Constitution as it is, and to restore the Union as it was."

The Copperheads sometimes talked of violent resistance, and in some cases started to organize. They never actually made an organized attack, however. As war opponents, Copperheads were suspected of disloyalty, and their leaders were sometimes arrested and held for months in military prisons without trial. One famous example was General Ambrose Burnside's 1863 General Order Number 38, issued in Ohio, which made it an offence (to be tried in military court) to criticize the war in any way.[8] The order was used to arrest Ohio congressman Clement L. Vallandigham when he criticized the order itself.[9] Lincoln, however, commuted his sentence while requiring his exile to the Confederacy.

Probably the largest Copperhead group was the Knights of the Golden Circle; formed in Ohio in the 1850s, it became politicized in 1861. It reorganized as the Order of American Knights in 1863, and again, early in 1864, as the Order of the Sons of Liberty, with Vallandigham as its commander. One leader, Harrison H. Dodd, advocated violent overthrow of the governments of Indiana, Illinois, Kentucky, and Missouri in 1864. Democratic party leaders, and a Federal investigation, thwarted his conspiracy. In spite of this Copperhead setback, tensions remained high. The Charleston Riot took place in Illinois in March 1864. Indiana Republicans then used the sensational revelation of an antiwar Copperhead conspiracy by elements of the Sons of Liberty to discredit Democrats in the 1864 House elections. The military trial of Lambdin P. Milligan and other Sons of Liberty revealed plans to set free the Confederate prisoners held in the state. The culprits were sentenced to hang, but the Supreme Court intervened in ex parte Milligan, saying they should have received civilian trials.[10]

Most Copperheads actively participated in politics. On May 1, 1863, former Congressman Vallandigham declared the war was being fought not to save the Union, but to free the blacks and enslave Southern whites. The army then arrested him for declaring sympathy for the enemy. He was court-martialed by the Army and sentenced to imprisonment, but Lincoln commuted the sentence to banishment behind Confederate lines.[11] The Democrats nevertheless nominated him for governor of Ohio in 1863; he campaigned from Canada, but lost after an intense battle. He operated behind the scenes at the 1864 Democratic convention in Chicago. This convention adopted a largely Copperhead platform, and selected Ohio Representative George Pendleton, a known peace-Democrat, as the vice-presidential candidate. However, it chose a pro war presidential candidate, General George B. McClellan. The contradiction severely weakened the party's chances to defeat Lincoln.

The values of the Copperheads reflected the Jacksonian democracy of an earlier agrarian society. The Copperhead movement attracted Southerners who had settled north of the Ohio River, the poor, and merchants who had lost profitable Southern trade.[12][13] They were most numerous in border areas, including southern parts of Ohio, Illinois, and Indiana (in Missouri, comparable groups were avowed Confederates).[14]

The movement has scattered bases of support outside the lower Midwest. There was a Copperhead element in Connecticut that dominated the Democratic Party there.[15] The Copperhead coalition included many Irish American Catholics in eastern cities, mill towns, and mining camps (especially in the Pennsylvania coal fields). They were also numerous in German Catholic areas of the Midwest, especially Wisconsin[16]

Historian Kenneth Stampp has captured the Copperhead spirit in his depiction of Congressman Daniel W. Voorhees of Indiana:

There was an earthy quality in Voorhees, "the tall sycamore of the Wabash." On the stump his hot temper, passionate partisanship, and stirring eloquence made an irresistible appeal to the western Democracy [i.e., the Democratic Party]. His bitter cries against protective tariffs and national banks, his intense race prejudice, his suspicion of the eastern Yankee, his devotion to personal liberty, his defense of the Constitution and State's rights faithfully reflected the views of his constituents. Like other Jacksonian agrarians, he resented the political and economic revolution then in progress. Voorhees idealized a way of life which he thought was being destroyed by the current rulers of his country. His bold protests against these dangerous trends made him the idol of the Democracy of the Wabash Valley.[17]

Two central questions have run through the historiography of the Copperheads: How serious a threat did they pose to the Union war effort and hence to the nation's survival? And to what extent and with what justification did the Lincoln administration and other Republican officials violate civil liberties to contain the perceived menace?[18]

The first book-length scholarly treatment of the Copperheads appeared in 1942. In The Hidden Civil War, Wood Gray decried the "defeatism" of the Copperheads. He argued they deliberately served the Confederacy's war aims. Also in 1942, George Fort Milton published Abraham Lincoln and the Fifth Column, which likewise condemned the traitorous Copperheads and praised Lincoln as a model defender of democracy.

Gilbert R. Tredway, a professor of history, in his 1973 study Democratic Opposition to the Lincoln Administration in Indiana found most Indiana Democrats were loyal to the Union and desired national reunification. He documented Democratic counties in Indiana having outperformed Republican counties in the recruitment of soldiers. Tredway found that Copperhead sentiment was uncommon among the rank-and-file Democrats in Indiana.[19]

The chief historians who favored the Copperheads are Richard O. Curry and Frank L. Klement. Klement devoted most of his career to debunking the idea that the Copperheads represented a danger to the Union. Klement and Curry have downplayed the treasonable activities of the Copperheads, arguing the Copperheads were traditionalists who fiercely resisted modernization and wanted to return to the old ways. Klement argued in the 1950s that the Copperheads' activities, especially their supposed participation in treasonous anti-Union secret societies, were mostly false inventions by Republican propaganda machines designed to discredit the Democrats at election time. Curry sees Copperheads as poor traditionalists battling against the railroads, banks, and modernization. In his standard history Battle Cry of Freedom (1988), James M. McPherson asserted Klement had taken "revision a bit too far. There was some real fire under that smokescreen of Republican propaganda."

Jennifer Weber's Copperheads (2006) agrees more with Wood and Milton than with Klement. She argues that first, Northern antiwar sentiment was strong, so strong that Peace Democrats came close to seizing control of their party in mid-1864. Second, she shows the peace sentiment led to deep divisions and occasional violence across the North. Third, Weber concluded that the peace movement deliberately weakened the Union military effort by undermining both enlistment and the operation of the draft. Indeed, in 1863, Lincoln had to divert combat troops to retake control of New York City from the anti-draft rioters. Fourth, Weber shows how the attitudes of Union soldiers affected partisan battles back home. The soldiers' rejection of Copperheadism and their overwhelming support for Lincoln's reelection in 1864 was decisive in securing the Northern victory and the preservation of the Union. The Copperheads' appeal, she argues, waxed and waned with Union failures and successes in the field.