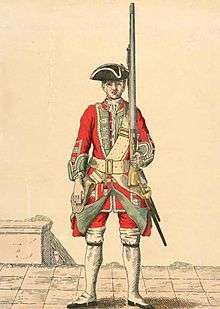 The regiment took part in the capture of Belle Île in April 1761 during the Seven Years' War.[12] In 1782, all regiments of foot without a special designation were given a county title "to cultivate a connection with the County which might at all times be useful towards recruiting"[13] and so the regiment was redesignated the 19th (1st North Riding of Yorkshire) Regiment.[11] The regiment also saw action at the Siege of Seringapatam in April 1799 during the Fourth Anglo-Mysore War.[14]

The regiment was known as the Green Howards from 1744. At that time, regiments were known by the name of their colonel. The 19th regiment's colonel was Hon. Sir Charles Howard. However, at the same time, the 3rd Regiment of Foot had been commanded by its colonel Thomas Howard, since 1737. To tell them apart (since they both would have been known as 'Howard's Regiment of Foot'), the colours of their uniform facings were used to distinguish them. In this way, one became 'Howard's Buffs' (eventually simply The Buffs), while the other became the Green Howards. Although the Green Howards were referred to unofficially as such from then on, it was not until 1921 that the regiment was officially retitled as the Green Howards (Alexandra, Princess of Wales's Own Yorkshire Regiment).[15] Under the Childers Reforms, all non-royal English infantry regiments were to wear white facings from 1881. In 1899, the regiment was able to reverse this decision with the restoration of the grass green facings formerly worn by the 19th Foot.[16]

In April 1801 the regiment was deployed to Ceylon for service in the Kandyan Wars.[17] The regiment lost 6 officers and 172 other ranks in a massacre there in June 1803 and then remained on the island to enforce British rule.[18] The regiment did not return to England until May 1820.[19]

The regiment saw action at the Battle of Alma in September 1854 and at the Siege of Sevastopol in winter 1854 during the Crimean War and then saw action again during the Indian Rebellion.[20] In 1875, Princess Alexandra, Princess of Wales presented new colours to the 1st Battalion at Sheffield, and consented to the regiment bearing her name, thus becoming the 19th (1st Yorkshire North Riding – Princess of Wales's Own) Regiment of Foot.[21] The regiment adopted a cap badge consisting of the Princess's cypher "A" combined with the Dannebrog or Danish cross and topped by her coronet. The Princess became Queen Alexandra in 1901, and was the regiment's Colonel-in-Chief from 1914 until her death in 1925.[22]

In 1881, the infantry of the line were reorganised. The regular regiments of foot lost their numbers, instead taking on a territorial or county title, and amalgamating with the militia battalions and rifle volunteers in its designated regimental district. The regiment was renamed as the Princess of Wales's Own (Yorkshire Regiment), with its recruiting area continuing to be the North Riding.[23] A 3rd (Militia) Battalion was embodied in December 1899, and embarked the following month for service in South Africa during the Second Boer War. Many of the officers and men returned home in May 1902 on the SS Sicilia.[24]

In July 1902, the regiment was redesignated as Alexandra, Princess of Wales's Own (Yorkshire Regiment).[22][25]

The 1st Battalion remained in India as part of the 2nd (Sialkot) Cavalry Brigade in the 2nd (Rawalpindi) Division throughout the war and then took part in the Third Anglo-Afghan War in 1919.[26] The 2nd Battalion landed at Zeebrugge as part of the 21st Brigade in the 7th Division in October 1914 for service on the Western Front.[26] The 2nd Battalion held the Menin crossroads for 16 days during the First Battle of Ypres in October 1914 sustaining heavy casualties.[27]

The 1/4th and 1/5th Battalions landed at Boulogne-sur-Mer as part of the York and Durham Brigade in the Northumbrian Division in April 1915 for service on the Western Front.[26] Both battalions saw action at the Second Battle of Ypres in April 1915.[27] 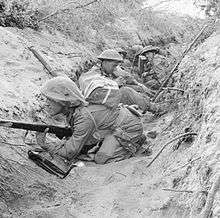 Men of D Company of the 1st Battalion, Green Howards occupy a captured German communications trench during the breakout at Anzio, Italy, 22 May 1944.

During the Second World War, the regiment was again increased in size, although not to as large an extent as in the 1914–1918 conflict. In all, twelve battalions saw service: the 1st, with 15th Infantry Brigade of the 5th Infantry Division, and 2nd regular army Battalions, the 4th and 5th Territorial Army Battalions, both serving with the 150th Infantry Brigade of the 50th (Northumbrian) Infantry Division, the 6th and 7th Battalions (both formed as 2nd Line duplicates of the 4th and 5th, when the Territorial Army was doubled in size in 1939, served with 69th Brigade, originally with the 23rd (Northumbrian) Division but later the 50th Division), the 8th was formed for home defence, the 9th was formed for garrison duty (and later converted into the 108th Light Anti-Aircraft Regiment, Royal Artillery, serving with the 52nd (Lowland) Infantry Division from March 1942), the 10th was formed by the conversion of the 2nd East Riding Yeomanry (a war-time duplicate of this yeomanry unit) in 1940 and subsequently becoming the 12th (Yorkshire) Parachute Battalion attached to the 5th Parachute Brigade and part of the 6th Airborne Division[28] The 11th, 12th and 13th were all formed in 1940.[11][29] 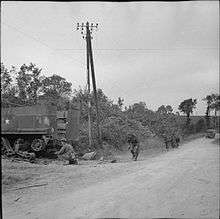 Men of the Green Howards mopping up German resistance near Tracy Bocage, Normandy, France, 4 August 1944. A knocked out half-track is visible on the left.

In 1942, the 12th Battalion was converted to armour as the 161st Regiment Royal Armoured Corps, but retained its Green Howards cap badge on the black beret of the Royal Armoured Corps as did all other infantry units converted in the same way.[30] In October 1943 it was then converted again, this time to the reconnaissance role, as 161st (Green Howards) Regiment in the Reconnaissance Corps. It never went into action as a regiment, but provided a replacement squadron to the 43rd (Wessex) Reconnaissance Regiment, which had suffered heavy losses when its transport was sunk on the way to France to fight in the Battle of Normandy.[31]

From 1949 to 1952, the regiment took part in the campaign against Chinese and Malayan Communist Insurgents in Malaya. Over the next 30 years it served in Afghanistan, Suez, Cyprus, Hong Kong, Libya, Belize, Berlin and Northern Ireland.[29] It was deployed during the Falklands War in 1982 when one Regimental Officer, Gavin Hamilton, was killed in action.[32] It also saw action during the First Gulf War in 1991 and during the Bosnian War from 1996 to 1997.[29] 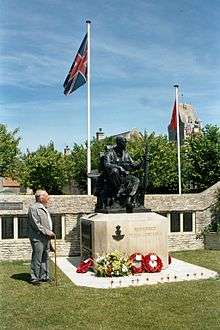 In March 2006 at a farewell dinner at Dunster Castle in Somerset, the regiment paid farewell to HM King Harald V, its retiring Colonel-in-chief.[33] Until the regiment's rebadging, the Green Howards was one of five remaining line infantry regiments that had not been amalgamated in their entire history, a claim shared with The Royal Scots, The 22nd (Cheshire) Regiment, The Royal Welch Fusiliers and The King's Own Scottish Borderers. However, on 6 June 2006 the regiment amalgamated with the Prince of Wales's Own Regiment of Yorkshire and the Duke of Wellington's Regiment (West Riding), all Yorkshire-based regiments in the King's Division, to form the Yorkshire Regiment (14th/15th, 19th and 33rd/76th Foot).[11] The official rebadging took place on 6 June 2006, whilst elements of the regiment were stationed in Bosnia and Kosovo.[29]

A and B (Green Howards) companies of the Tyne-Tees Regiment, based in Scarborough and Middlesbrough respectively, merged with the Prince of Wales's Own Regiment and Duke of Wellington's Regiment companies of the East and West Riding Regiment to form the 4th Battalion The Yorkshire Regiment.[34] Following further mergers, in 2012, the 2nd Battalion The Yorkshire Regiment (Green Howards) was removed from the order of battle.[35]

Each year, all companies in the battalion took part in a competition, consisting of sports and military skills tests, to win the right to be named 'King Harald's Company', after the regiment's Colonel-in-Chief. The winning company was given a special flag bearing the King's personal cypher, the Company Sergeant Major was presented with a special pace stick, and all members of the company were permitted to wear a special red badge on the arm of their uniform.[36]

The Green Howards Regimental Museum is located in the old Trinity Church in the centre of the market place in Richmond, North Yorkshire.[37]

The regiment's battle honours were as follows:[11]

Soldiers of the Green Howards awarded the Victoria Cross (VC)

Colonels of the regiment were:[11]

The Green Howards (Alexandra, Princess of Wales's Own Yorkshire Regiment) - (1921)