Twenty-Second Air Force (22 AF) is a Numbered Air Force component of Air Force Reserve Command (AFRC). It was activated on 1 July 1993 and is headquartered at Dobbins Air Reserve Base, Georgia.

In the event of mobilization, some of the Twenty-Second Air Force subordinate units would come under the operational control of the Air Mobility Command's (AMC) 21st Expeditionary Mobility Task Force, headquartered at McGuire Air Force Base, New Jersey.

22 AF is responsible for recruiting and training reservists and for maintaining subordinate units at the highest level of combat readiness. A by-product of training is to coordinate daily support of the active duty air force.

22 AF's wartime mission is to provide combat-ready airlift and support units and augments personnel requirements to Air Mobility Command in the United States.

Twenty-Second Air Force manages more than 25,000 Reservists and has 149 unit-equipped aircraft. Reserve crews in 22 AF fly the C-130 Hercules, including the WC-130 "Hurricane Hunter" aircraft, which are located at nine different Air Force Reserve wings. The wings, flying squadrons and support units are spread throughout nine states – from New York to Mississippi, Ohio and Minnesota, with its western most wing in Colorado Springs, Colorado.

Established as the Domestic Division, Air Corps Ferrying Command in the early days of World War II, the organization's mission was the transport of newly produced aircraft from points within the United States to Ports of Embarkation for shipment to Britain and other overseas Allies. In 1946, the organization was transferred to Air Transport Command and became, in essence, a military airline its Continental Division, managing transport routes within the United States.

When the USAF was created as a separate service in 1947, Military Air Transport Service was established to support the new Department of Defense, with responsibility for its support falling to the Department of the Air Force. Redesignated Western Transport Air Force (WESTAF), the organization managed all MATS operations from the Mississippi River west to the east coast of Africa until MATS was replaced by the Military Airlift Command in 1966. When MATS became MAC, WESTAF was redesignated 22d AF, with headquarters at Travis AFB, CA.

On 29 March 1979, the Twenty-Second Air Force assumed responsibility for managing Military Airlift Command resources in the Pacific. For this mission, the unit provided a single commander for MAC airlift units in the Pacific theater; command and control of theater-assigned airlift forces for Pacific Air Forces; theater tactical airlift war planning and Pacific exercise planning; and aerial ports in the Pacific area to support the air movement of personnel, cargo, equipment, patients, and mail. The division participated in tactical exercises such as Team Spirit, Ulchi Focus Lens, and Capstan Dragon. 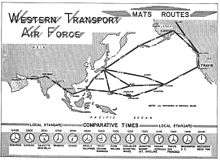