It is the largest note measuring 160 × 82 mm and has a purple colour scheme.[3] The five hundred euro banknotes depict bridges and arches/doorways in modern architecture (around the late 20th century).[3]

The five hundred euro note contains several complex security features such as watermarks, invisible ink, holograms and microprinting that make counterfeiting very difficult. Initially the high denomination notes were introduced very rapidly so that in first 7 years (by Dec 2008) there were 530,064,413 five hundred euro banknotes in circulation. Subsequently rate of increase was radically slowed. In January 2016 there were 611,833,416 in circulation.

The European Central Bank announced on 4 May 2016 that it would phase out the 500 euro note by the end of 2018.[8][9] “Authorities increasingly suspect that they (€500 notes) are being used for illegal purposes, an argument that we can no longer ignore,” according to a high-ranking bank official, Benoît Cœuré.[8][10]

Main article: History of the euro

The euro was founded on 1 January 1999, when it became the currency of over 300 million people in Europe.[11] For the first three years of its existence it was an invisible currency, only used in accountancy. Euro cash was not introduced until 1 January 2002, when it replaced the national banknotes and coins of the countries in eurozone 12, such as the Luxembourgish franc.[11]

As of June 2012, current issues do not reflect the expansion of the European Union. Cyprus is not depicted on current notes as the map does not extend far enough east and Malta is also missing as it does not meet the current series' minimum size for depiction.[18] The European Central Bank is currently introducing a new series of Euro-banknotes.[19] The 500 euro denomination, however, will not be included in the new series as it was decided to phase out issuance of 500 euro banknotes.[8]

The five hundred euro note measures at 160 millimetres (6.3 in) × 82 millimetres (3.2 in)[20] with a purple colour scheme.[20] All bank notes depict bridges and arches/doorways in a different historical European style; the five hundred euro note shows Modern architecture (around the 20th century).[20] Although Robert Kalina's original designs were intended to show real monuments, for political reasons the bridge and art are merely hypothetical examples of the architectural era.[21] Neverthless, the featured bridge is highly similar to Guadiana International Bridge.

Like all euro notes, it contains the denomination, the EU flag, the signature of the president of the ECB and the initials of said bank in different EU languages, a depiction of EU territories overseas, the stars from the EU flag and twelve security features as listed below.[3] 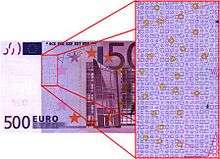 The EURion constellation on the 500 euro note.

The five hundred euro note is protected by: 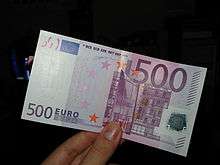 One quarter of all 500 euro notes are recorded in Spain since its launch in 2002.

The value of the note is several times greater than many of the largest circulating notes of other major currencies, such as the United States 100 dollar bill.[26] Thus a large monetary value can be concentrated into a small volume of notes. This facilitates crimes that deal in cash, including money laundering, drug dealing, and tax evasion.[27] There have been calls to withdraw the note for this reason.[28][29][30][31][32] However, some of the currencies the Euro replaced had widely used high-value notes, including the 10,000 Belgian francs (€247.89), 5,000 Austrian schillings (€363.36), and 1,000 Dutch guilders (€453.78), although these did not exceed the value of the €500 note. Two exceptions were the 1,000 Deutsche Marks, which had an equivalent value of €511.29, and 500 Latvian lats, which had an equivalent value of €711.44.[26] But while these national currency banknotes had similar face value, the numbers of banknotes circulated was considerably smaller. For instance approx 93 million of the German 1000 DEM banknotes was circulating in the year 2000, far fewer than the over five hundred million 500 Euro banknotes circulating in less than 7 years after the Euro banknotes were introduced.

In particular, Spain had a quarter of all these high-value bills within its borders in 2006.[28] This concentration of €500 notes is far greater than expected for an economy of Spain's size, as prior to Euro conversion the largest banknote was 10,000 Spanish peseta worth ~ €60. These notes are rarely seen in every-day commerce – they have been nicknamed "Bin Ladens" by the populace (as the presence and appearance of the notes are well-known, but the notes themselves are very difficult to find).[33][34][35] British and Spanish police are using the bills to track money laundering.[28][29]

As of 20 April 2010, money exchange offices in the United Kingdom stopped selling €500 notes due to their use in money laundering.[36] The Serious Organised Crime Agency claimed that "90% of all €500 notes sold in the UK are in the hands of organised crime", revealed during an eight-month analysis.[36] The €500 note is worth in the region of £400,[6] depending on exchange rates (more than eight times the value of the Bank of England's largest publicly circulated note), and had become the currency choice for gangs to hide their profits.[36]

The EU directive 2005/06/EC[37] "on the prevention of the use of the financial system for the purpose of money laundering and terrorist financing" tries to prevent such crime by requiring banks, real estate agents, tax and business advisors or agents, casinos and more companies to investigate and report usage of cash in excess of €15,000.[37] 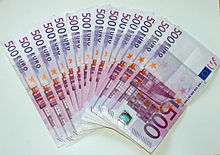 As of December 2015, there were approximately 613,559,542 €500 banknotes in circulation around the Eurozone, therefore it is the second-least circulated banknote in the Eurozone.[38] That is approximately €306,779,771,000 worth of €500 banknotes.[38] The European Central Bank closely monitors the stock and circulation of euro notes and coins. It is the Eurosystem’s task to ensure an efficient and smooth supply of euro notes and to maintain their integrity.[38]

There are several communities of people at European level, most of which is EuroBillTracker,[39] that, as a hobby, it keeps track of the euro banknotes that pass through their hands, to keep track and know where they travel or have travelled.[39] The aim is to record as many notes as possible to know details about its spread, like from where and to where they travel in general, follow it up, like where a ticket has been seen in particular, and generate statistics and rankings, for example, in which countries there are more tickets.[39] EuroBillTracker has registered over 155 million notes as of May 2016,[40] worth more than €2.897 billion.[40]

This audio file was created from a revision of the "500 euro note" article dated 2012-05-02, and does not reflect subsequent edits to the article. (Audio help)
More spoken articles
This article is issued from Wikipedia - version of the 11/30/2016. The text is available under the Creative Commons Attribution/Share Alike but additional terms may apply for the media files.