Currencies of the European Union 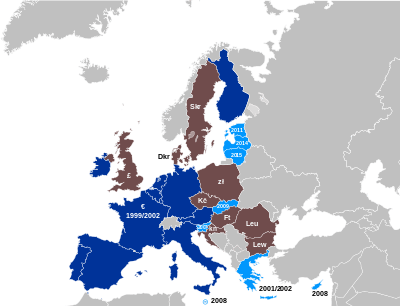 Note that there are other currencies used in overseas territories of member states. Those territories however are not part of the European Union proper (legally subject to all its law) so are not listed here.

Exchange rate regimes of EU countries according to Reinhart and Rogoff

Reinhart and Rogoff classifies the exchange rate regimes of EU countries as follows:[6]

The classification codes are:

EU law would start to apply in Northern Cyprus if it comes under control of the Republic of Cyprus (if the Cyprus dispute is resolved through unification), whose official legal tender is the Euro.

Presently, the TRNC government has declared the Turkish lira (TL, TRY) to be its legal tender. TL is not issued by any EU member state, but by Turkey and it has a free floating regime.[8] Nevertheless, usage of the Euro in Northern Cyprus is already high in practice.[9][10][11]

During the negotiations of the Maastricht Treaty of 1992 the United Kingdom secured an opt-out,[12] while a protocol gave Denmark the right to decide if and when they would join the euro. Denmark subsequently notified the Council of the European Communities of their decision to opt out of the euro, and this was included as part of the 1992 Edinburgh Agreement, a Decision of Council, reached following the Maastricht Treaty's initial rejection in a 1992 Danish referendum. The purpose of the agreement was to assist in its approval in a second referendum, which it did.

Sweden, which is obliged to adopt the treaty under the terms of its accession treaty, held a referendum in 2003 on adopting the euro which was rejected by the Swedish electorate. The government has chosen to deliberately fail to meet the convergence criteria for euro adoption by not joining ERM II without prior approval by a referendum. The European Commission stated it would respect this decision for now but not tolerate similar moves from countries that join the EU after the euro is introduced.

Those European Union states that have adopted it are known as the eurozone and share the European Central Bank (ECB). The ECB and the national central banks of all EU countries, including those who operate an independent currency, are part of the European System of Central Banks. Before a state adopts the euro, its currency has to spend at least two years in the European Exchange Rate Mechanism which pegs it to the euro within a fixed band. Currently two currencies are in ERM, including the Danish Krone which has an opt-out. The Bulgaria lev is also pegged via a currency board.[13]

Further information: History of the euro

Except for the two states with opt outs, all current and future members of the EU are obliged to adopt the Euro as their currency, thus replacing their current ones.[16] Denmark, which has an opt out, is planning to hold a referendum on its opt-outs due to increasing pressure to adopt the euro. The Danish Kroner is already pegged to the euro, and Denmark has fulfilled all the requirements for adoption.