The Eurogroup is the recognised collective term for informal meetings of the finance ministers of the eurozone, i.e. those member states of the European Union (EU) which have adopted the euro as their official currency.

The group has 19 members. It exercises political control over the currency and related aspects of the EU's monetary union such as the Stability and Growth Pact. Its current president is Dutch finance minister Jeroen Dijsselbloem.

The ministers meet in camera a day before a meeting of the Economic and Financial Affairs Council (Ecofin) of the Council of the European Union. They communicate their decisions via press and document releases. This group is related to the Council of the European Union (only Eurogroup states vote on issues relating to the euro in Ecofin) and was formalised under the Lisbon Treaty.

The Eurogroup, formerly known as the Euro-X and Euro-XI in relation to the number of states adopting the euro, was established at the request of France as a policy co-ordination and consultation forum on eurozone matters.[1] The December 1997 European Council endorsed its creation and the first meeting was held on 4 June 1998 at Senningen Castle in Luxembourg .[2]

To begin with, the chair of the Eurogroup mirrored that of the rotating Council presidency, except where the Council presidency was held by a non-eurozone country, in which case the chair was held by the next eurozone country that would hold the Council presidency.[2] In 2004 the ministers decided to elect a president (see "President" below for details) and in 2008, the group held a summit of heads of state and government, rather than finance ministers, for the first time.[3] This became known as the Euro summit and has held meetings irregularly during the financial crisis.

Since the beginning of the monetary union, its role has grown in regards to the euro's economic governance. The fact the group meets just before the Ecofin council means it can pre-approve all Ecofin's decisions on eurozone affairs.[4] In 2009 the Lisbon Treaty formalised the group and its president. 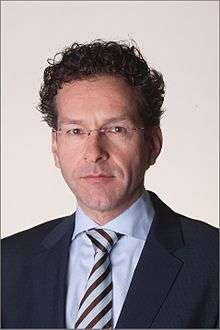 In September 2004, the Eurogroup decided it should have a semi-permanent president who would be appointed for a term of two years. Finance Minister and then Prime Minister of Luxembourg Jean-Claude Juncker was appointed first president of the Eurogroup, mandated from 1 January 2005, until 31 December 2006, and was re-appointed for a second term in September 2006.[6] Under the Lisbon Treaty, this system was formalised (see "legal basis" below) and Juncker was confirmed for another term.[7]

The Presidency has helped strengthen the group, since before Juncker's appointment the Eurogroup was only 'accidentally' present at meetings in the European Parliament. Since the position of President was created, the president has attended Parliament's committee on Economic and Monetary Affairs every six months.[4]

After his reappointment as Eurogroup president in January 2010, Juncker emphasised the need to broaden the scope of the Eurogroup's business. In particular in terms of co-ordinating economic policies and representation. Juncker proposed creating a small secretariat consisting of four to five civil servants to prepare the group's meetings. However, although France and Spain support such plans, Germany fears that strengthening the group might undermine the independence of the European Central Bank.[8]

In June 2012, the Estonian minister Jürgen Ligi was being considered as a possible successor for Mr. Juncker.[9] However, in January 2013, Juncker hinted that his likely successor would be Jeroen Dijsselbloem,[10] who was appointed second president of the Eurogroup on 21 January 2013.[11] On 13 July 2015, Dijsselbloem was re-elected.[12]

Eurogroup members as of 2015.[13] The ECB President, Economic and Monetary Affairs Commissioner and Chairman of the Eurogroup Working Group also attend the meetings. It is worthwhile to note that the members of the EU who choose not to participate in the Euro (UK, Sweden, the Czech Republic, Denmark, etc.) have been excluded from observer status. The membership is very fluid. For example, IMF personnel such as Christine Lagarde are sometimes allowed to be present at meetings—see Lagarde statement 20130316. What remains unknown about this group is whether they allow observers to speak or speech by the observers is forbidden.

Prior to the Lisbon Treaty, the Eurogroup had no legal basis. A formal legal basis was granted for the first time under the Lisbon Treaty when it came into force on 1 December 2009. Protocol 14 of the treaty lays out just two articles to govern the group;

Furthermore, the treaty amended the Council of the EU's rules so that when the full Ecofin council votes on matters only affecting the eurozone, only those states using the euro (the Eurogroup countries) are permitted to vote on it.[15]

On 15 April 2008 in Brussels, Juncker suggested that the eurozone should be represented at the International Monetary Fund as a bloc, rather than each member state separately: "It is absurd for those 15 countries not to agree to have a single representation at the IMF. It makes us look absolutely ridiculous. We are regarded as buffoons on the international scene."[16] However Finance Commissioner Joaquin Almunia stated that before there is common representation, a common political agenda should be agreed.[16] In January 2010 Juncker indicated that the Commission is to propose that the group become a member of the G20.[8]

This government would come in the form of a regular meeting of the eurozone heads of state and government (similar to the European Council) rather than simply the finance ministers which happens with the current Eurogroup. Sarkozy stated that "only heads of state and government have the necessary democratic legitimacy" for the role. This idea was based on the meeting of eurozone leaders in 2008 who met to agree a co-ordinated eurozone response to the banking crisis.[3]

This is in contrast to an early proposal from former Belgian Prime Minister Guy Verhofstadt who saw the European Commission taking a leading role in a new economic government, something that would be opposed by the less integrationist states.[1] Sarkozy's proposal was opposed by Eurogroup chair Jean-Claude Juncker who did not think Europe was ripe for such a large step at the time[1] and opposition from Germany killed off the proposal.[3][18] Merkel approved of the idea of an economic government, but for the whole of the EU, not just the eurozone as doing so could split the EU and relegate non-eurozone states to second class members.[18]

In his 2011 State of the Union address, Commission President José Manuel Barroso opposed the Franco-German intergovernmental plan, stating that community institutions should perform that role.

During the 2013 Economic crisis in Cyprus, Eurogroup proceeded towards the first bail-in approach towards the Cypriot banking sector, resulting in the confiscation of deposits of Cyprus' two main banks. Despite the lack of any visibility on the banks' credentials and balance sheets, Eurogroup decided to utilise deposits of the two banks for a bail-in. The process is not completed yet. However, it has been criticized by some in the EU as an attack on private property.[19]

Criticisms levelled at the Eurogroup include the lack of transparency and lack of accountability.[20]