The official name in Czech is koruna česká (plural koruny české, though the zero-grade genitive plural form korun českých is used on banknotes and coins of value 5 Kč or higher). The ISO 4217 code is CZK and the local acronym is Kč, which is placed after the numeric value (e.g., "50 Kč"). One koruna equals 100 haléřů (abbreviated as "h", singular: haléř, nominative plural: haléře, genitive plural: haléřů – used with numbers higher or equal to 5 – e.g. 3 haléře, 8 haléřů), but haléře have been withdrawn, and the smallest unit of currency is 1 kč. 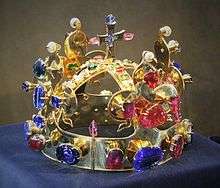 Crown of Saint Wenceslas, crown jewel of the Kingdom of Bohemia

In November 2013, the Czech National Bank has intervened to weaken the exchange rate of the koruna through a monetary stimulus in order to stop the currency from excessive strengthening.[1] In late 2016, the CNB stated that the return to conventional monetary policy was planned for mid-2017.[2][3]

The Czech Republic planned to adopt the euro in 2010, but its government suspended that plan indefinitely in 2005.[4] Although the country is economically well positioned to adopt the euro, there is considerable opposition to the move within the Czech Republic.[5] According to a survey conducted in April 2014, only 16% of the Czech population was in favour of replacing the koruna with euro.[6] According to a spring 2015 flash Euro-barometer public opinion is 70% against euro-adoption vs 29% for euro-adoption.[7]

Since 1997, sets for collectors are also issued yearly with proof quality coins. There's also a tradition of issuing commemorative coins – including silver and gold coins – for numismatic purposes.

For a complete listing see: Commemorative coins of the Czech Republic.

The first Czech banknotes issued on 8 February 1993 consisted of Czechoslovak notes with adhesive stamps affixed to them. Only the 100, 500 and 1000 korun denominations were overstamped, the lower denominations circulated unchanged during this transitional period. Each stamp bears a Roman and Arabic number identifying the denomination of the banknote to which it is affixed (C and 100, D and 500, M and 1,000). Subsequent issues of the 1,000-korun note replaced the adhesive stamp with a printed image of same.[10]

A newly designed series of banknotes of denominations 20, 50, 100, 200, 500, 1000 and 5000 korun were introduced later in 1993 and are still in use at present – except for 20, 50 and the first versions of 1000 and 5000 korun notes, since the security features of 1000 and 5000 notes were upgraded in the subsequent issues (The 2000 korun note, which has been introduced in 1996, is still valid in all versions, with and without the new security features). These banknotes feature renowned Czech persons on the obverse and abstract compositions on the reverse. Modern protective elements can be found on all banknotes.

The Coat of arms of the Czech Republic can be found on the reverse side of all denominations.