Kosovo and the euro 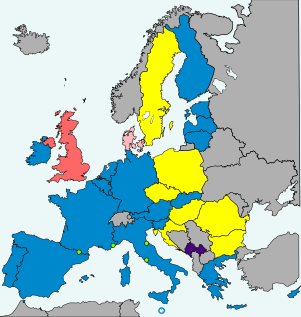 Before Kosovo declared independence in 2008, Kosovo unilaterally adopted the euro as its currency in 2002 when it was a United Nations mandate; although, it is not an official eurozone member.

During the disintegration of Yugoslavia in the 1990s Kosovo unsuccessfully attempted to gain independence, and in 1998-1999 the situation escalated with the Kosovo War.

Monetary situation prior to 1999

Before the establishment of UNMIK, Kosovo (as part of Serbia) was bound to Yugoslav monetary policy, and the Yugoslav dinar. However, war-time inflation and tensions with the Federal Republic of Yugoslavia had severely discredited the Yugoslav dinar. As a result, many preferred to use and hoard foreign currencies instead of relying on the dinar. The most frequently used foreign currency was the German mark, although the U.S. dollar and Swiss franc were also widely used.

Introduction of the mark

In the immediate post-conflict period, other currencies – especially the Deutsche Mark – were widely used alongside the dinar. In September 1999, UNMIK produced a regulation accepting the use of other currencies; this recognised the status quo.[1] The Yugoslav dinar was never officially withdrawn from circulation, but its use was "not encouraged". The use of other currencies, mainly the U.S. dollar, also continued.[lower-alpha 2][2] The Bundesbank was not informed in advance, and did not send any additional coins and notes to Kosovo for the changeover. But since there were no restrictions on the import and export of German marks, and many Kosovars working abroad had sent money home, it was possible to supply Kosovo with sufficient marks.

The Yugoslav (and later Serbian) dinar continued to be widely used in Northern Kosovo and Serb enclaves throughout Kosovo.

Like Germany, Kosovo switched to the euro on 1 January 2002. The Deutsche Mark remained legal tender in Kosovo until 9 March 2002.

The change to the euro was achieved in cooperation with the European Central Bank, and several national banks in the Eurozone. By December 2001, about 100 million euro in cash was frontloaded to the Banking and Payments Authority of Kosovo.[3] Kosovo does not mint any coins of its own.

Kosovo is a potential candidate for accession to the EU. The European Commission and the ECB have voiced their discontent over countries unilaterally adopting the euro on several occasions in the past,[4] and it is unclear whether Kosovo would be able to accede to the EU while using the euro. Montenegro, which similarly unilaterally adopted the euro in 2002, had a statement attached to their Stabilisation and Association Agreement with the EU that read: "unilateral introduction of the euro was not compatible with the Treaty."[5] The issue is expected to be resolved through the accession negotiations process,[4] with the ECB having stated that the implications of unilateral euro adoption "would be spelled out at the latest in the event of possible negotiations on EU accession."[5] Diplomats have suggested that it's unlikely countries will be forced to withdraw the euro from circulation.[6][5]