The pound, also known as the lira (Greek: λίρα / plural λίρες and Turkish: lira, from the Latin libra through the Italian lira), was the currency of Cyprus, including the Sovereign Base Areas in Akrotiri and Dhekelia,[1][2] until 31 December 2007, when the Republic of Cyprus adopted the euro. However, the self-proclaimed Turkish Republic of Northern Cyprus used and still uses on the official level the Turkish lira.

The Cypriot pound was replaced by the euro as official currency of the Republic of Cyprus on 1 January 2008 at the irrevocable fixed exchange rate of CYP 0.585274 per EUR 1.00. 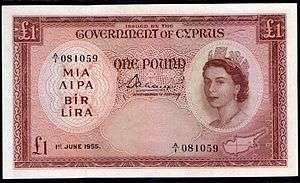 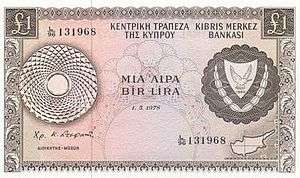 The British introduced the pound sterling unit to Cyprus in 1879 at a rate of one to 180 Turkish piastres. It remained equal in value to the pound sterling until 1972, some twelve years after Cyprus gained independence from the United Kingdom. Initially the Cyprus pound was divided into 20 shillings (σελίνι / σελίνια, şilin), in common with its United Kingdom counterpart. However, unlike the United Kingdom shilling, the Cyprus shilling was divided into 9 piastres (γρόσι / γρόσια, kuruş), thus establishing a nomenclature link to earlier Ottoman currency. The piastre was itself divided into 40 para (like the kuruş). The para denomination did not appear on any coins or banknotes but was used on postage stamps. However, the  1⁄4-piastre coin was equal to 10 para (παράδες) and called δεκάρα in Greek and the  1⁄2-piastre coin was equal to 20 para and called εικοσάρα.

The introduction of the British currency into Cyprus was controversial from its inception in 1879 as technically the island remained a province of the Ottoman Empire and the right to issue currency within the Ottoman Empire rested solely with the Ottoman Sultan. A question on the legality of introducing the pound in Cyprus was raised by the British Member of Parliament, Mr. Thomson Hankey in the United Kingdom parliament in 1879, but concerns were dismissed by the British government, and they ceased to be an issue on the island following its full annexation by Britain in 1914.[3]

In 1955, a decision was made by the British colonial authorities to decimalise the Cypriot pound, and in this they used the system proposed by William Brown, a member of the United Kingdom parliament, who suggested in 1855 that the pound sterling in the United Kingdom should be divided into one-thousand parts, each called a mil. [4] Although this system was never adopted in the United Kingdom, it was used in several British colonies, including Hong Kong from 1863 to 1866;[5] and the British Palestine Mandate from 1926 until 1948.[6] This latter example may have been the impetus to use a pound-mil system in Cyprus as the Palestinian pound was for a brief period accepted as legal tender in Cyprus.[7]

The subdivision was changed to 100 cents (σεντ, sent) to the pound on 3 October 1983. At that time, the smallest coin still in circulation was that of 5 mils. This was renamed as  1⁄2 cent, but soon was abolished. Mil-denominated coins are no longer legal tender.

Towards the end of the Cypriot pound era, some cashiers omitted the 1- and 2-cent coins from the change they gave. Owner-operated businesses often rounded down the net amount to be paid to the nearest multiple of 5 cents.

In summer 2006, the Bank of Cyprus started including on its statements the indicative balance in euros. The Cyprus Telecommunications Authority followed suit with its bills two months later. A small number of shops also showed indicative euro totals on their receipts. By late autumn 2006, the number of banks and shops offering indicative euro equivalents on their statements and pricing had increased significantly.

The Cypriot pound was replaced by the euro as official currency of the Republic of Cyprus on 1 January 2008 at the irrevocable fixed exchange rate of CYP 0.585274 per €1. However, pound banknotes and coins continued to have legal tender status and were accepted for cash payments until 31 January 2008. Cypriot pounds were convertible free of charge at Cypriot credit institutions until 30 June 2008. CYP coins were convertible at the Central Bank of Cyprus until 31 December 2009 and CYP banknotes will be convertible until 31 December 2017.[11]

In 1879, copper coins were introduced in denominations of  1⁄4,  1⁄2, and 1 piastre. The Greek-Cypriots called the first of these coins the δεκάρα (dekara—from the Greek word deka that means ten), referring to its equivalence to 10 para. The Greek name for the  1⁄2-piastre coin was εικοσάρα (ikosara—from the Greek ikosi that means twenty). These coins were followed, in 1901, by silver 3,  4 1⁄2, 9 and 18 piastres, the last two being equal to 1 and 2 shillings. The 3 piastres was only issued that year. The  1⁄4 piastre was last struck in 1926. In 1934, scalloped-shaped  1⁄2 and 1 piastre coins were introduced struck in cupro-nickel, changing to bronze in 1942. In 1947, cupro-nickel 1 and 2 shillings replaced the silver coins. The last piastre and shilling coins were issued in 1949.

In 1955, the 5 and 10 shillings notes were replaced by 250 and 500-mil notes. The Central Bank of Cyprus was established in 1963 as an autonomous institution in accordance with the Central Bank of Cyprus Law 1963 and the relevant articles of the constitution.[12] It began issuing paper money in 1964, and introduced 10-pound notes in 1977. Notes for 250 mils ceased production in 1982, shortly before the cent was introduced.

The last set of banknotes in use were: