"lats" redirects here. For muscles in the human back and shoulder, see latissimus dorsi muscle.

The lats (plural: lati (2–9) latu (10 and more)), ISO 4217 currency code: LVL or 428) was the currency of Latvia until it was replaced by the euro on 1 January 2014. A two-week transition period during which the lats was in circulation alongside the euro ended on 14 January 2014.[3] It is abbreviated as Ls and was subdivided into 100 santīmi (singular: santīms; from French centime). 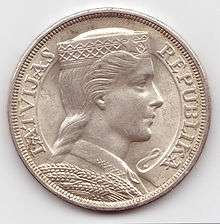 The 5 lati coin, used before World War II, became a popular symbol of independence during the Soviet era. The coin was designed by Rihards Zariņš.

The lats was first introduced in 1922, replacing the Latvian rublis at a rate of 1 lats = 50 rubļi. In 1940, Latvia was occupied by the USSR and the lats was replaced by the Soviet ruble at par.

The lats was reintroduced in 1992, replacing the Latvian rublis, which was used for a short period after Latvia regained its independence, at a rate of 1 lats = 200 rubļu.

Coins were issued in denominations of 1 santīms, 2 and 5 santīmi, 10, 20 and 50 santīmu, 1 lats and 2 lati. Besides standard coins in the list below and coins for collectors, there were a number of coins that were issued only once and were rarely found in circulation – three commemorative circulation coins in denominations of 2, 10 and 100 latu (the later two of which were, respectively, silver and gold), a 100 lats gold bullion coin, a standard issue 2 lats coin that was gradually taken out of circulation starting from 1999 due to safety issues[4] and a series of limited design 1 lats coins that were issued twice a year from 2004 to 2013, and once in 2001 and 2003. The standard coins were designed by Gunārs Lūsis and Jānis Strupulis.

The lats was the fourth-highest-valued currency unit after the Kuwaiti dinar, Bahraini dinar, and the Omani rial at the end of its circulation. The 500 lats note was the world's third most valuable banknote after the $10,000 Singapore note and the 1,000 Swiss franc note.[5][6]