While still a child, Duce was often sent to rehabilitation institutes by his parents, later in life he got involved with drugs, even spending periods in drug rehab because of drug overdoses. He has been a close friend with former Machine Head guitarist Logan Mader since childhood.

He was introduced to rock music with AC/DC’s album For Those About to Rock We Salute You.[2]

At the age of 11 he was sent to a reform school in Texas for two years. He explains the reason for this in an interview: "I had too much energy for my body to contain”. In that school he lost touch with the outside world’s art, especially music.[2]

After getting out of the rehab school, Logan Mader introduced him to metal music with bands such as Slayer, Metallica, Exodus, King Diamond, Celtic Frost, Sacrilege B.C..[2]

Around 1987 Duce and Mader decided to start playing the guitar. They’ve unsuccessfully tried to form a band several times. Later, Duce realized that the bass guitar was more suitable for him due to his large frame and finger width, so he became a bass player.[3]

Adam Duce points out that his main influences come from bass players such as Cliff Burton, Geezer Butler, Steve Harris.[3]

Duce met Robb Flynn when he was 16 through a common friend, and they later became roommates. At the time, Flynn was playing in Vio-Lence. In 1991 they got involved in a big fight with a local gang in Oakland, California, where they lived. 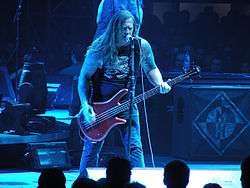 This led to Flynn leaving Vio-Lence and served as a catalyst for the forming of a new band – Machine Head. Retaining a desire to write music, Flynn recruited Duce, guitarist Logan Mader and drummer Tony Costanza to form Machine Head.[4]

Duce played bass and did the backing vocals for all the Machine Head albums between the first (Burn My Eyes) and seventh albums (Unto the Locust) and participated in all of the band's tours until 2012. He also has several appearances in live shows as a bassist for Roadrunner United.

Duce didn’t fully participate in the creative process for the songs for Unto the Locust. In an interview he admitted that he wrote several riffs and lyrics that got rejected by Robb Flynn, which led to further disagreements between him and the band. These disagreements were later pointed out as the reason for the band to fire him.[5]

On February 22, 2013, Machine Head announced that the band and Duce were parting ways.[6] Robb Flynn later explained in an emotional message on the band's website that the band had fired Duce.[7]

On January, 21, 2014, Duce began a court trial against Machine Head's three current members and manager in Federal Court, alleging trademark infringement, breach of partnership agreement and defamation, among other things.[8]

On July, 4, 2014, it became clear from a post in Machine Head's official Facebook page that the lawsuit had been settled and all claims by Duce have been dropped.[9]