Logan Conrad Mader (born November 16, 1970 in Montreal, Quebec, Canada) is a record producer and current guitarist in melodic death metal band Once Human, as well as former lead guitarist in groove metal band Machine Head, which was formed in Oakland, California in 1992.

Mader is most famous for his time in Machine Head, whose 1994 debut, Burn My Eyes, was released by Roadrunner Records and quickly became the top-selling debut album in the label's history until Slipknot's debut album. Their second album, The More Things Change..., was released in 1997 and Logan left the band shortly thereafter to divert his energy and time to side projects.

Machine Head formed on October 12, 1991 with Mader on lead guitar, Robb Flynn on guitar and vocals, Adam Duce on bass and Tony Costanza on drums. He played with Machine Head through two albums until early 1998. After Logan's six-year run with Machine Head, he joined the band Soulfly where he filled the slot as guitarist for their 1998 world tour. Logan's union with Soulfly was short lived (8 months) and the only track he technically recorded with them was one of the remixes for Quilombo. Wanting to once again pursue his own projects, Logan left Soulfly in January 1999.

Shortly after the dissolution of Medication, Logan formed the band New Black, which was later changed to Stereo Black. Although the band opened for a local Hed PE gig, tracked a full demo, shopped it to a few labels and created an internet buzz, they were never signed. Years later, the Stereo Black track Save Me which was later called Inside. The song was featured in the trailer for Max Payne and The Butterfly Effect 2 and in the direct to video film Never Back Down 2: The Beatdown. They also created a song for the Scream 4 soundtrack, titled "Denial." 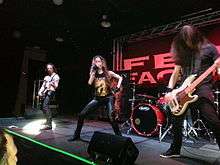 Mader announced his new project, Once Human, in May 2015, which features newcomers Lauren Hart (vocals), Damian Rainauld (bass) and Ralph Alexander (drums). The group signed to earMUSIC and will release their debut album, The Life I Remember, in September 2015.[2]

In August and September 2015, they toured the southern, midwestern and southwestern United States with Fear Factory, Chicago rock band The Bloodline and Hollywood melodic metal band Before the Mourning.[3]