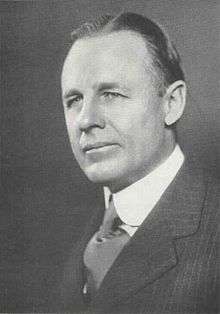 Benedict Crowell (October 12, 1869 - September 8, 1952) was a United States military officer and politician particularly influential in military organization during and following World War I. He was United States Assistant Secretary of War from 1917 to 1920.

Crowell was born on October 12, 1869 in Cleveland, Ohio to William Crowell.

He attended Yale University, where he was admitted to the Zeta Psi fraternity, graduating in 1891 with both a Ph.D. and M.A. He returned to Cleveland to pursue a business career in steel and mining, and married Julia Cobb in December 1904. As war loomed, he rose quickly through the ranks of the United States Army Reserve, being made first an honorary major on his entry in 1916, and eventually a brigadier general before being tapped for political positions. During the war he went on to serve as Assistant Secretary of War and Director of Munitions, founded the Army Ordnance Association in 1919, and eventually became a special consultant to the Secretary of War during World War II. He remained influential and active in politics between the wars, serving as a principal framer of the National Defense Act of 1920, and was president of the Army Ordnance Association, a lobbying group, for a quarter of a century. He served as president of the National Rifle Association 1930–1931.[1]

He died in Cleveland on September 8, 1952. Crowell is interred in Arlington National Cemetery.