Norman Ralph Augustine (born July 27, 1935) is a U.S. aerospace businessman who served as Under Secretary of the Army from 1975 to 1977. Augustine served as chairman of the Review of United States Human Space Flight Plans Committee.

In 1958 he joined the Douglas Aircraft Company in California, where he worked as a research engineer, program manager and chief engineer. Beginning in 1965, he served in the Office of the Secretary of Defense as Assistant Director of Defense Research and Engineering. He joined LTV Missiles and Space Company in 1970, serving as vice president of advanced programs and marketing. In 1973 he returned to the government as Assistant Secretary of the Army and in 1975 became Under Secretary of the Army, and later Acting Secretary of the Army. Joining Martin Marietta Corporation in 1977 as vice president of technical operations, he was elected as CEO in 1987 and chairman in 1988, having previously been president and COO. In 1990, he chaired the Advisory Committee on the Future of the U.S. Space Program, known as the Augustine Committee. He served as president of the Lockheed Martin Corporation upon the formation of that company in 1995, and became CEO later that year. He retired as chairman and CEO of Lockheed Martin in August 1997, when he became a lecturer with the rank of professor[1] on the faculty of Princeton University where he served until July 1999.

In 1999 he helped found In-Q-Tel, a venture capital firm sponsored by the CIA with a mandate to support United States intelligence by investing in advanced technology.[2][3]

In May 2009 Augustine was named as chairman of the Review of United States Human Space Flight Plans Committee, that was tasked to review NASA's plans for the Moon, Mars and beyond.[4]

In March 2011 Augustine agreed to serve as chair of the U.S. Antarctic Program Blue Ribbon Panel to assess U.S. activities in the South Pole. In July 2011, Augustine became a member of the United States Energy Security Council,[5] which seeks to diminish oil's monopoly over the US transportation sector and is sponsored by the Institute for the Analysis of Global Security (IAGS).[5] He currently sits on the America Abroad Media advisory board.[6]

Augustine has been presented the National Medal of Technology by the President of the United States and received the Joint Chiefs of Staff Distinguished Public Service Award. He has five times received the Department of Defense's highest civilian decoration, the Distinguished Civilian Service Award. He is co-author of The Defense Revolution and Shakespeare In Charge and author of Augustine's Laws and Augustine’s Travels. He holds 34 honorary degrees and was selected by Who’s Who in America and the Library of Congress as one of “Fifty Great Americans” on the occasion of Who’s Who’s fiftieth anniversary. He has traveled in over 124 countries and stood on both the North and South Poles of the earth. 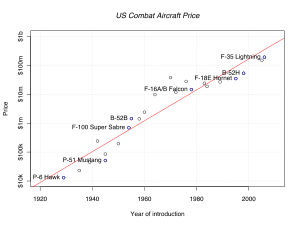 Graphical plot of Augustine's law Number XVI: "In the year 2054, the entire defense budget will purchase just one aircraft."[7]