Brad Rogers Carson (born March 11, 1967) is an American lawyer and politician from the state of Oklahoma who served as the Acting Under Secretary of Defense for Personnel and Readiness from 2015 to 2016. In that role, he was, according to the New York Times, the "architect" of a number of historic reforms.[1] A member of the Democratic Party, he served in the United States House of Representatives from 2001 to 2005. He also served as Undersecretary of the Army from 2014-2015 and as General Counsel of the Army from 2012-2014.[2][3] Carson is currently a senior advisor at the Boston Consulting Group.[4]

Carson was born in Winslow, Arizona. His father worked for the Bureau of Indian Affairs and the family moved around Indian reservations in Nevada, Arizona, North Carolina and Kansas. As a teenager, Carson moved back to Oklahoma, where his family had deep roots in the historic Cherokee Nation, of which Carson is an enrolled member.

Carson was a top student at Jenks High School and won a National Merit Scholarship to attend Baylor University, where he was elected to Phi Beta Kappa. He became the first student at Baylor in 75 years to be awarded a Rhodes Scholarship. As a Rhodes Scholar, Carson went to Trinity College, Oxford, and earned a second B.A. (which became an M.A. a few years later) in Politics, Philosophy, and Economics. He attended the University of Oklahoma College of Law, graduating at the top of his class in 1994. According to The Almanac of American Politics, Carson had originally intended to attend Yale Law School, only to change his mind while at Oxford.

After graduation from the University of Oklahoma, Carson took a job at a prestigious Oklahoma law firm, Crowe & Dunlevy. In 1996, his firm was awarded the Exceptional Contribution to Legal Services Award by Legal Services of Eastern Oklahoma. 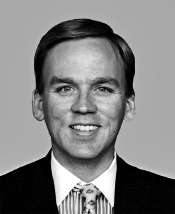 Brad Carson's official photo as a Member of Congress

In 1997 Carson was selected as a White House Fellow, where he was assigned to The Pentagon as a Special Assistant to the Secretary of Defense.

An enrolled tribal member of the Cherokee Nation of Oklahoma, he was elected, as a Democrat, to the United States House of Representatives in 2000 from Oklahoma representing the 2nd Congressional District, located in the northeastern part of the state. In the primary, Carson defeated long-term state representative Bill Settle, who was chairman of the Appropriations Committee in the Oklahoma House of Representatives.[5] In the general election, he defeated Republican Andy Ewing with 55 percent of the vote.[6] The seat came open after three-term Republican Tom Coburn gave it up to honor a self-imposed term limit.

After redistricting changed the political composition of his district to be much more favorable to a Democratic candidate, Carson was reelected in 2002 with nearly 75 percent of the vote.[7] In that election, he had to fend off a primary challenge from Mike Mass, a state representative who had succeeded Settle as the Appropriations Chairman.[8]

During his tenure in Congress, Carson was generally seen as a moderate Democrat. He was a member of the conservative Democratic Blue Dog Coalition. He served on the Transportation Committee,[9] the Natural Resources Committee,[10] and the Small Business Committee.[11] On October 10, 2002, Brad Carson was among the 81 House Democrats who voted in favor of authorizing the invasion of Iraq.

In 2004, Carson sought the open U.S. Senate seat being vacated by retiring Republican Don Nickles. Although he easily won the Democratic nomination, he faced a tough general election contest with Coburn, who had won the nomination by an unexpectedly large margin. Carson described himself as a Conservative Democrat. Carson distanced himself from the national Democratic Party on most public policy matters. He portrayed himself as more moderate than his Republican opponent. Coburn, by contrast was one of the "true believers" in the 1995 Republican House freshman class and its Contract With America. This race was considered one of a handful of competitive races for the U.S. Senate in 2004.

By many accounts, the 2004 U.S. Senate campaign between Carson and Coburn was one of the most partisan races of that year. Coburn and Carson both presented themselves as supporting the traditional definition of marriage as "a union of one man and one woman" in the gay marriage debate. Although registered Democrats outnumber registered Republicans in Oklahoma by almost 2 to 1, most Oklahoma Democrats are quite conservative by national standards.[12]

Coburn claimed that a vote for Carson was a vote for Democrats such as Tom Daschle, Hillary Clinton and Ted Kennedy. Carson was also hampered by George W. Bush's tremendous popularity in the state (the John Kerry campaign made virtually no effort in Oklahoma). In the November election, Coburn defeated Carson by a large margin, 53 percent to 42 percent. While Carson trounced Coburn in the 2nd District, Coburn swamped Carson in the Oklahoma City metropolitan area and the closer-in Tulsa suburbs. Coburn won the state's two largest counties, Tulsa and Oklahoma, by a combined 86,000 votes — more than half of his overall margin of 166,000 votes.

Despite Carson's loss, election analyst Stuart Rothenberg called the Carson campaign one of the four best run campaigns in the nation in 2004. The Weekly Standard called him "The Perfect Democrat"[13] After the election, Carson wrote an article for The New Republic which was the subject of much discussion.[14] 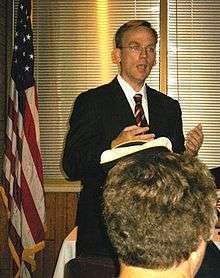 After the 2004 Senate election, Carson's term in the United States Congress expired on January 3, 2005; Carson was succeeded by Dan Boren. Carson indicated that he had no immediate plans to seek political office, and, in January 2005, he accepted a semester-long teaching fellowship specializing in U.S. politics at Harvard University. Upon leaving Harvard, he returned to his hometown of Claremore, Oklahoma, and worked as Chief Executive Officer of Cherokee Nation Businesses, which is owned by the Cherokee Nation of Oklahoma in Catoosa, Oklahoma. As an expert in Indian law, Carson oversaw one of the largest businesses in the state, with thousands of employees, hundreds of millions of dollars in revenue, and more than a dozen in-house lawyers who specialized in Indian law and corporate law. In December 2008, Carson left his post at Cherokee Nation Businesses to deploy to Iraq as an Intelligence Officer in the U.S. Navy. He was officer-in-charge of weapons intelligence teams embedded with the U.S. Army's 84th Explosive Ordnance Disposal Battalion in the nine southern provinces of Iraq; the teams worked with EOD teams at seven bases and investigated bomb sites, caches, smuggling routes, and other activities related to improvised explosive devices. For this work, Carson received, among other awards, the Bronze Star. On his return, he was elected to the board of Cherokee Nation Businesses.[15]

In January 2010, Carson assumed a position as professor of business and law and at the University of Tulsa and as director of the National Energy Policy Institute, a non-profit energy policy organization funded by billionaire George Kaiser's family foundation.[16][17] In his academic work, Carson has written extensively about the economics of renewable energy.[18][19] He has also contributed journalism to The Weekly Standard, The New Republic, Blueprint, and Democracy: A Journal of Ideas. In 2010, Carson contributed to a symposium[20] issue of Democracy: A Journal of Ideas, in which he was one of ten writers (including Martha Nussbaum, Michael Sandel, and others) discussing the future of progressive political thought and politics. He is the author of several other works, including a guide to federal appellate practice, a work co-authored with Judge Robert Bacharach (who was appointed by President Obama to the 10th Circuit Court of Appeals). More recently, he was been working on a long series of articles about military reform for the online journal War on the Rocks.[21][22]

Carson had met Barack Obama in 2004 when they were both nominees of the Democratic Party for open seats in the United States Senate. Carson endorsed Obama in 2006 for the 2008 presidential election.[23] Carson served as Obama's personal representative in the approval of candidates for delegates from Oklahoma to the 2008 Democratic National Convention. Oklahoma was the first state to name its complete delegation to the 2008 Democratic Convention.

Carson's wife, Julie, served on the Oklahoma State Regents for Higher Education. They live in Claremore, Oklahoma.[24] They have one son, Jack.[25]

Under Secretary of the Army, Brad Carson

On September 14, 2011, President Barack Obama nominated Carson to serve as the General Counsel of the United States Department of the Army.[29] The United States Senate confirmed Carson by unanimous consent on December 17, 2011.[30]

On January 6, 2014, President Obama nominated Carson to be Under Secretary of the Army, to replace Joseph W. Westphal, whom the president had nominated to be the United States Ambassador to Saudi Arabia.[31] On February 12, 2014, Carson was confirmed by the United States Senate[32] and he was sworn in as the 31st Under Secretary of the Army on March 27, 2014.[33] Fellow Oklahoma Democrat, Principal Chief Bill John Baker of the Cherokee nation, praised Carson, saying, “I applaud President Obama for nominating Brad Carson to this post [...] Brad is a Cherokee citizen and has committed his life to one of our Cherokee values: serving people. As a U.S. congressman he served the people of Oklahoma’s second district, as a CEO he served Cherokee Nation Businesses and the Cherokee people [...] he will be a champion for our American military in his role as Army undersecretary.”[34] As Chief Operating Officer of the Department of the Army, Carson led day-to-day-business operations of the global U.S. Army business enterprise, with over 490,000 active duty soldiers, 335,000 National Guard soldiers, 200,000 Army Reserve soldiers, and over 330,000 civilians. He also supervised the development and submission of the Army’s budget,which exceeded $150 billion. In a move lauded by veterans groups, Carson made national headlines when he formally apologized to veterans of the Iraq War for the Army's mishandling of chemical weapons exposures.[35] 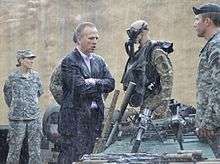 Carson served as the acting Undersecretary of Defense for Personnel and Readiness from April 2015 until April 2016, resigning while still awaiting Senate formal approval.[36] As Undersecretary, Carson led a number of pioneering initiatives such as the Department of Defense’s “Force of the Future” reforms, the largest personnel changes to the military and civilian workforce in nearly 50 years.[37] Carson oversaw the historic opening of all combat positions to women. [38] He also reformed the military retirement system for the first time in 70 years and succeeded in opening the doors of military service to transgender persons.[38] [39] As Undersecretary, Carson managed all areas of military readiness, military and civilian personnel requirements and training, and military and civilian family matters. One military service organization noted upon his resignation from the Department of Defense, "Brad Carson’s service in the Pentagon has been extraordinary. In many ways, military personnel policies are designed for men with stay-at-home wives; Carson’s willingness to take on institutional inertia - supported by military leaders with vision and daring - means that our Armed Forces will be stronger and more flexible going forward. Carson’s courage in tackling maternity leave, reproductive technology, lactation rooms, retaining transgender troops, and other tough issues will pay off in retaining some of the top talent that drains from the military’s middle-manager ranks. The contributions of this visionary leader will live on in tomorrow’s Armed Forces."[40]