He attended and graduated from Yale College in 1791, studied law in Litchfield, Connecticut with Judge Tapping Reeve, who also taught Aaron Burr and John C. Calhoun.[1]

In 1793, Porter was admitted to the bar, and commenced practice in Canandaigua, New York. From 1797 to 1804, he was Clerk of Ontario County, and was a member of the New York State Assembly (Ontario and Steuben Co.) in 1802. In the fall of 1809, Porter moved to Black Rock, New York, later part of Buffalo, and became a member of the firm of Porter, Barton & Company with his brother Augustus, which controlled transportation on the Niagara River.[1] The company portaged goods by land from Lake Erie to Lewiston on the Niagara River through Niagara Falls, then shipped them east on Lake Ontario.[4]

In 1809, he was elected to the United States House of Representatives as a Democratic-Republican. He served in the 11th and 12th United States Congresses, holding office from March 4, 1809, to March 3, 1813. During his service in Congress, he was a leading figure among Congressional "war hawks" and Chairman of the Committee that recommended preparation for war with Great Britain, and was known as an early supporter of James Madison.[5] Porter, along with Henry Clay and others, pressured Madison to end the discussion and take up arms against England, in what became known as the War of 1812.[5]

At the same time, from 1810 to 1816, he was a member of the Erie Canal Commission, a commission on inland navigation established in 1810 by the New York State Legislature to survey a canal route from the Hudson River to the Great Lakes.[1] Porter served on the Commission with fellow Democratic-Republicans, Simeon De Witt and DeWitt Clinton. The Federalists on the Committee were Gouverneur Morris, William North, Thomas Eddy, and Stephen Van Rensselaer. In 1811, Porter and the Democratic-Republicans were joined by Robert R. Livingston and Robert Fulton. Charles D. Cooper joined in 1815.[6][7][8]

While in Congress, Porter, realizing the level of America’s unpreparedness for war, pushed for greater numbers of soldiers and supplies. When his efforts fell on deaf ears, he instead offered his experience in trade to the military. Beginning in May 1812, he was served as assistant quartermaster general in the New York State Militia.[5] As a brigadier general, he participated in and criticized General Alexander Smyth’s abortive operations against British Canada in 1813 at the Battle of Black Rock, culminating in a bloodless duel between the two. The historian John R. Elting wrote of the duel, stating "Unfortunately, both missed."[9]

Porter later raised and commanded a brigade of New York militia that incorporated a Six Nations Indian contingent and led his command with distinction. He brokered a deal with Red Jacket, who agreed to provide 500 troops under Porter's command.[5] For his actions, he was presented a gold medal under joint resolution of Congress dated November 3, 1814 "for gallantry and good conduct" during the Battle of Chippewa, the Battle of Niagara, and the Siege of Fort Erie.[1]

With the end of military operations, Porter went to Washington where he was given command of all American forces on the Niagara Frontier by President Madison. When news of a peace treaty arrived, he returned to civilian life and was declared a hero by his fellow citizens.[10]

From February 1815 to February 1816, he served as Secretary of State of New York as a Democratic-Republican under New York Governor Daniel D. Tompkins. He was also elected to the 14th United States Congress. Although his term in Congress began on March 4, 1815, the actual Session began only in December, and he took his seat on December 11, 1815. On January 23, 1816, he resigned, having been appointed a Commissioner under the Treaty of Ghent, which caused a controversy as to the constitutionality of sitting in Congress and holding this commissionership at the same time.[11]

In 1817, his political friends of Tammany Hall printed ballots with his name and distributed them among their followers to vote for Porter for Governor of New York at the special election which was held after the resignation of Governor Daniel D. Tompkins. DeWitt Clinton, the otherwise unopposed candidate, was fiercely hated by the Tammany organization, and Porter received about 1,300 votes although he was not really running for the office. Porter became a regent of the University of the State of New York in 1824, and served in that capacity until 1830.[1]

He was again a member of the State Assembly (Erie Co.) in 1828, but vacated his seat when he was appointed to the Cabinet.[1]

From May 16, 1828, to March 9, 1829, Porter served as U.S. Secretary of War under President John Quincy Adams, and was an advocate for the removal of Eastern Indians beyond the Mississippi. He moved to Niagara Falls in 1836 and was a presidential elector on the Whig ticket in 1840.[1]

On March 20, 1844, General Porter died in Niagara Falls and was interred in Oakwood Cemetery, along with brother Augustus. 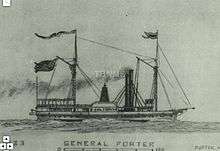 A paddle-steamer named the General Porter was launched in 1834.[16]

His son, Peter A. Porter died in the bloody Battle of Cold Harbor during the American Civil War. His grandson was Peter Augustus Porter (1853–1925), a U.S. Representative from New York and his nephews were Augustus Seymour Porter, a United States Senator from Michigan, and Peter B. Porter, Jr., an Assemblyman and Speaker of the New York State Assembly.

Fort Porter, Porter Avenue in Buffalo, Porter Road in Niagara Falls, and Porter Township in Niagara County are all named in honor of Gen. Porter.[17] Porter's letters and papers survive in the library collections of the Buffalo History Museum.[18]

In 1834, a paddle steamer named the General Porter was launched, on Lake Erie.[16] She sailed out of Buffalo, New York, until 1838, when she was sold to the Royal Navy, which renamed her the HMS Toronto. The Royal Navy employed her patrolling Lake Erie, the St Clair River, and the upper Niagara River.