John McAllister Schofield (September 29, 1831 – March 4, 1906) was an American soldier who held major commands during the American Civil War. He later served as U.S. Secretary of War and Commanding General of the United States Army.

John McAllister Schofield was born September 29, 1831, in Gerry, New York, son of James & Caroline (McAllister) Schofield. He graduated from the United States Military Academy at West Point in 1853, ranking seventh in his class of 52 graduates, and was commissioned a brevet second lieutenant in the artillery.[1] In his final year at the Academy, he suffered a potentially career-ending incident. While working as a teaching assistant in the mathematics section, he was accused of allowing cadet candidates in his classroom to make offensive jokes and drawings on the blackboard. He was dismissed from West Point, but appealed the decision to the Secretary of War, who referred the matter back to a Board of Inquiry at the Academy. His expulsion was overturned by a majority of the board, but of the two officers who voted to sustain it, one was a future commander of his during the Civil War, Lt. George H. Thomas, a cavalry and artillery instructor. Although Schofield's memoirs do not mention Thomas's role in the board, his persistent criticism of Thomas's generalship after the war may have been provoked by this incident.[2]

Schofield served for two years in the artillery, was assistant professor of natural and experimental philosophy at West Point from 1855 to 1860, and while on leave (1860–1861) was professor of physics at Washington University in St. Louis, Missouri.[1]

When the Civil War broke out, Schofield became a major in the 1st Missouri Infantry Regiment and served as chief of staff to Maj. Gen. Nathaniel Lyon until Lyon's death during the Battle of Wilson's Creek (Missouri) in August 1861. Schofield acted with "conspicuous gallantry" during the battle, and received the Medal of Honor in 1892 for that action.[3]

Schofield was promoted to brigadier general of volunteers on November 21, 1861, and to major general on November 29, 1862. From 1861 to 1863 he held various commands in the Trans-Mississippi Theater, most of the time in command of the Army of the Frontier. He was eventually relieved of duty in the West, at his own request, due to altercations with his superior Samuel R. Curtis.

On April 17, 1863, he took command of the 3rd Division in the XIV Corps of the Army of the Cumberland. He returned to Missouri as commander of the Department of Missouri in 1863. His command in Missouri was marred by controversy, with pro-Union Missourians sending a delegation to Washington DC to plead with President Lincoln to dismiss Schofield—for sympathizing with pro-Confederate Bushwhacker para-military marauders who were attacking loyal Union citizens. In 1864, as commander of the Army of the Ohio, he took part in the Atlanta Campaign under Major General William T. Sherman. Sherman placed him in command of a major operation to break the rail lines in late July 1864, Schofield became embroiled in another controversy with the commander of the US XIV Corps Major General John M. Palmer who resigned from his position as Corps Commander, rather than to serve under Schofield at Utoy Creek. Schofield with his XXIII Corps and the XIV Corps spent the month in front of Atlanta and East Point with lackluster results. Sherman resorted to a flanking movement to defeat the Confederates under Hood. Schofield was sent to cut off Hardee's retreat at Jonesboro but failed to move. He became embroiled in a further controversy, when he was placed under General Stanley commanding the US IV Corps, on 30 August 1864. 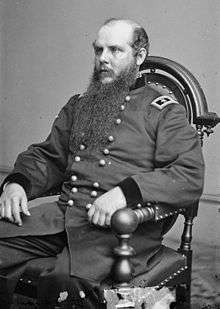 John Schofield during the Civil War.

Sherman, after the fall of Atlanta, took the majority of his forces on a March to the Sea through Georgia. Schofield's Army of the Ohio was detached to join Major General George H. Thomas in Tennessee. When Confederate General John Bell Hood invaded Tennessee and nearly cut off Schofield's command at Spring Hill, Hood's rash assault to regain momentum at the subsequent Battle of Franklin resulted in a significant defeat. On December 15–16, Schofield took part in Thomas's crowning victory at the Battle of Nashville where Hood's Army of Tennessee was decisively defeated, and effectively destroyed as a fighting force for the remainder of the war. However, during the buildup towards the battle Schofield intrigued against Thomas, feeding Grant false information, in order to try to succeed his senior in command.[4] For his services at Franklin he was awarded the rank of brigadier general in the regular army on November 30, 1864, and the brevet rank of major general on March 13, 1865.[1]

Ordered to operate with Sherman in North Carolina, Schofield moved his corps by rail and sea to Fort Fisher, North Carolina, in 17 days, occupied Wilmington on February 22, 1865, fought the action at Kinston on March 10, and on March 23, joined Sherman at Goldsboro.

After the war, General Schofield joined the Military Order of the Loyal Legion of the United States, a military society composed of officers of the Union armed forces and their descendants. Schofield served as the Order's commander-in-chief from 1899 to 1903.

After the war, Schofield was sent on a special diplomatic mission to France, on account of the presence of French troops in Mexico. During Reconstruction, Schofield was appointed by President Andrew Johnson to serve as military governor of Virginia and of the First Military District.

He was promoted to major general on March 4, 1869, the same date General Ulysses S. Grant was sworn in as president of the United States. Schofield then served for a year as head of the Department of Missouri.

In 1870 he wrote an article criticizing his wartime rival George H. Thomas, who subsequently died of a stroke while writing a response. Following Thomas' death, Schofield succeeded him in commanding the Military Division of the Pacific.

In 1873, Schofield was given a secret task by Secretary of War William Belknap to investigate the strategic potential of a United States presence in the Hawaiian Islands. Schofield's report recommended that the United States establish a naval port at Pearl Harbor.

Starting in 1876 Schofield was superintendent of the United States Military Academy. In 1878, Schofield won the ire of the Radical Republicans when he was asked by President Rutherford B. Hayes to reopen the case of Major General Fitz John Porter, who had been convicted by a court-martial for cowardice and disobedience at the Second Battle of Bull Run. Schofield's board made use of a great amount of new evidence from Confederate generals who had participated in the battle and found that Porter had been wrongly convicted and that his actions might have saved the entire Union army from complete defeat caused by the ineptitude of Maj. Gens. John Pope and Irvin McDowell.

On April 5, 1880, an African American cadet at West Point, Johnson Chesnut Whittaker, was found bruised and beaten in his cot. He claimed that he had been attacked by fellow cadets, but the administration claimed he had fabricated his story to win sympathy. Whittaker was court-martialed and expelled for allegedly faking an assault on himself staged by his fellow cadets. A Congressional investigation into the incident resulted in Schofield's removal from his post as superintendent in 1881. Following that incident, Schofield served in the Department of the Gulf (1881–82), the Military Division of the Pacific (1882–83), the Military Division of the Missouri (1883–86), and the Military Division of the Atlantic (1886–88), He also went to France to witness military maneuvers there. 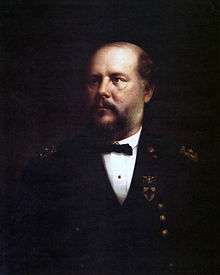 Upon the death of General Philip Sheridan in 1888, Schofield, by virtue of his seniority in rank, became the commanding general of the United States Army. On February 5, 1895, he was promoted to the rank of lieutenant general. Schofield retired on September 29, 1895, upon reaching the mandatory retirement age of 64.

General Schofield was an honorary companion of the Military Order of Foreign Wars.

General Schofield died at St. Augustine, Florida, and is buried in Arlington National Cemetery.[1] His memoirs, Forty-six Years in the Army, were published in 1897. He is memorialized by the military installation Schofield Barracks, Hawaii. Prior to his death, Schofield was the last surviving member of Andrew Johnson's cabinet.

The discipline which makes the soldiers of a free country reliable in battle is not to be gained by harsh or tyrannical treatment. On the contrary, such treatment is far more likely to destroy than to make an army. It is possible to impart instruction and give commands in such a manner and such a tone of voice as to inspire in the soldier no feeling, but an intense desire to obey, while the opposite manner and tone of voice cannot fail to excite strong resentment and a desire to disobey. The one mode or other of dealing with subordinates springs from a corresponding spirit in the breast of the commander. He who feels the respect which is due to others cannot fail to inspire in them respect for himself. While he who feels, and hence manifests, disrespect towards others, especially his subordinates, cannot fail to inspire hatred against himself.
— John M. Schofield

Was conspicuously gallant in leading a regiment in a successful charge versus the enemy.[6][7]

The medal was recommended by Schofield himself when he was interim U.S. Secretary of War (1868–69). Historian Benson Bobrick is critical of this and notes the vagueness of the details in the citation.[3]

General Schofield was posthumously entitled to the Civil War Campaign Medal and the Indian Campaign Medal. Both medals were created in 1907, a year after Schofield died.