This article is about the district. For its eponymous headquarters, see Bhind.

Bhind District (Hindi: भिंड) is a district of Madhya Pradesh state in central India of Chambal division. The town of Bhind is the district headquarters. Bhind District is situated in Chambal region in the northwest of the state. The geographical coordinates of the district are Latitude 26°36' N and Longitude 78°46' E. It is bounded by Agra, Etawah, Jalaun and Jhansi districts of Uttar Pradesh state to the north and the east, and the Madhya Pradesh districts of Datia to the south, Gwalior to the southwest, and Morena to the west. The geography of the district is characterized by uneven ravines, plain fertile fields and scanty forests. The total area of the district is 4,459 km².

The soil of Bhind is very fertile and is drained by the Chambal, Kali Sind, Kunwari or Kwari, Pahuj and Baisali rivers and by an extensive canal system. Formerly there were four tehsils, Bhind, Mehgaon, Gohad and Lahar, but at present there are seven tehsils: Bhind, Ater, Mehgaon, Gohad, Lahar, Mihona, and Raun. The district is part of the Chambal Division. Bhagirath Prasad Singh a dalit is an MP from Bhind. However Bhind is a brahmin, Rajput, Gurjar and Yadav dominated region.[1]

The district is named after the mythological Hindu saint Vibhandak Rishi, also called Bhindi Rishi. During Vedic period this region was ruled by Yadu, the son of King Yayati. Historically during Mahabharat Era, this region was under the reign of Chedi King Shishupal. King Yadav Krishna later established Yadav rule in this area. During Mahajanapada period Chedi had a prominent position.In 6th sentury Suraj sen kachwaha of Kachwaha dynasty built the Gwalior Fort and establish rule in gwalior.in 10th century when duleh ray of gwalior moved his rule to Jaipur State his younger brother bisaldev moved to bhind and defeated Mevatis of Datia district.. Later on royal rajput rajawat defeated Chandels and brought Bhind under Chauhan Dynasty. The State of Madhya Bharat was formally inaugurated by Jawaharlal Nehru, the then Prime Minister of India, on 28 May 1948 at Gwalior. Scindia and Holkar were sworn in as the Rajpramukh and Up-Rajpramukh, respectively. It was decided to divide the Union into six districts and Bhind was one among them. As a result of reorganization of the states Madhya Bharat was added to Madhya Pradesh state on 1 November 1956.

This region is identified by rest of India by its extensive ravines. The ravines created by gully erosion, are heavily under soil loss. The Government of Madhya Pradesh has tried to check this soil erosion and expansion of ravines by the means of watershed development and by aerial-seeding for plants like Prosopis, Acacia, and Jatropha in the ravines.

1. Paan Singh Tomar: Born in the village of Bhidosa near Porsa, a small city in the Morena district, he was an Indian soldier, athlete. A Hindi movie, Paan Singh Tomar was made based on his life.

Maharani Ahilya Bai Holkar built the chhatri of Malhar Rao Holkar at Alampur in Bhind district in 1766 A.D. It is marked by carvings. It is built on the pattern of the chhatris of Holkar rulers at Indore.

The temple of Hindu Lord Hanuman is situated at Lahar tehsil of Bhind. This place is known as Rawatpura Dham and is under in Lahar tehsil.

The Fort of Ater is located near Ater town, 35 km from Bhind and 40 km from Porsa. It was built by the Bhadauria kings Badan Singh, Maha Singh and Bakhat Singh in 1664-1668. The fort is situated on the banks of the Chambal River. There is a Kali temple situated at Maghera village in Ater tehsil, 15 km from Ater fort was built by Puruvanshi samaj in 1681. 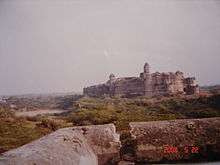 The temple of Lord Mahavira is situated at Barason in Mehgaon tehsil. In Jain tradition, it is among the Atishaya kshetra, i.e. places where lord Mahavira visited during his journey after getting Kaivalya (Ultimate Realization) and miraculous events took place. It is situated 14 km from Bhind town. Other Atishaya kshetra are Jain temple of Lord Neminath at Pavai near Bhind town and Lord Parshvanatha at Barahi, which is 20 km from Bhind at the Bhind-Etawah district border on the bank of the Chambal. An ancient holy place called "Digambar jain Parasnath Jinalaya" is situated in the village of Simar Biragma, about 20 km from Bhind and approximately 6 km from Atishaya kshetra Barason. There are approximately 60 Jain temples in Bhind town itself.

An ancient temple is situated at Jamdara village in Gohad tehsil, 45 km from Bhind, which was thought to be built by the mythological sage Parashurama.

An ancient temple of God Narad Dev is situated on the banks of the Kali Sindh. It can be reached by Lahaar Madori road, and is around 1 km from Madori.

National Chambal (Gharial) Wildlife Sanctuary is situated on the Chambal River, and is inhabited by crocodiles, ghariyals, Ganges Dolphins, and migratory birds. A boat cruise is organised by local forest officials. The sanctuary is 22 kilometres (14 mi) from Bhind town.

This fort at Gohad was built by the Jat king Maha Singh in the 16th century. Government offices are currently situated on its premises.

The Sun temple, also known as Balaji Temple, is situated 42 kilometres (26 mi) from Bhind at Balaji near Mihona Tehsil.

This is a temple to the Hindu God Hanuman, believed to possess curing powers. Worshipers go to the temple every Tuesday and Saturday. Another Panchmukhi Hanuman mandir in Heerapura 10 km from Lahar. Dandraua Dham [website] http://www.dandrauasarkar.com/

This is a temple (Bajrang Bali).

Malanpur is the modern industrial area in Bhind District near Gwalior in Gohad tehsil, 65 km from Bhind town. Its industries include modern automobiles, bicycles, soaps and detergents, electronics,pharmaceuticals and food and dairy products

Akoda A town 10 km east of district bhind. Here is nagarpanchayat having population approx 20,000. This is a historical place. Bhadoria rajpot ruled here and had their kings here.