Jamestown is the capital of the British Overseas Territory of Saint Helena, Ascension and Tristan da Cunha, located on the island of Saint Helena in the South Atlantic Ocean. It is also the historic main settlement of the island and is on its north-western coast. It is the island's only port and the centre of the island's road and communications network. It was founded when colonists from the English East India Company settled on the island in 1659 and was briefly occupied by the Dutch East India Company in 1673 before being recaptured. Many of the buildings built by the East India Company in the 1700s survive and give the town its distinctive Georgian flavour.

The town briefly hosted Napoleon in 1815 during his exile on St. Helena and later served as a base for the Royal Navy's efforts to suppress the slave trade. It had no role during the First World War and only played a minor role during the Second World War. 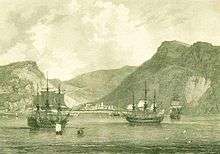 Jamestown was founded in 1659 by the English East India Company and named after James, Duke of York, the future King James II of England. A fort, originally named the Castle of St John, was quickly built and, with the restoration of the monarchy in 1660, the fort was renamed James Fort, the town Jamestown and the valley James Valley.[2] The fort and associated gun batteries dominated James Bay and were sporadically improved over the years.[3] In January 1673 the Dutch East India Company briefly seized control of the island until the English East India Company recaptured it in May. Since then the town has been continuously inhabited under English and then British rule.[2]

After his defeat in the Battle of Waterloo in June 1815 and the subsequent occupation of Paris, the Emperor of the French, Napoleon, surrendered to the British and was exiled to St Helena. He arrived on 21 October aboard the 74-gun ship HMS Bellerophon and resided at the Briars in Jamestown for several months until he was transferred to Longwood House in a more remote part of the island in December.[4] Jamestown was chosen to host a vice admiralty court and a naval base for British efforts to interdict the slave traffic between Africa and the Americas. Captured slave ships were often brought to Jamestown to be sold and their cargos were off-loaded in Rupert's Valley. By the time that the naval station was closed in the 1870s, an estimated 25,000 slaves had been rescued, although about 5,000 died shortly after arrival and were buried in Rupert's Valley. Long lost, their graves were rediscovered in 2006 in conjunction with preliminary digging for the airport. A team of archaeologists arrived in mid-2008 to excavate the graves. Some of the finds from the excavations are on exhibit at the International Slavery Museum in Liverpool, England.[5]

The island was too isolated to play any role in the First World War and only played a minimal one during the Second World War. The oil tanker RFA Darkdale was sunk by the German submarine U-68 in James Bay on 22 October 1941 with only 9 of the 50-man crew surviving. She had been sent to St Helena a few months prior to refuel ships operating in the South Atlantic. The wreck leaked small amounts of oil until its gradual deterioration caused the Ministry of Defence to dispatch a team of divers to pump out all the remaining oil in June 2015.[6] 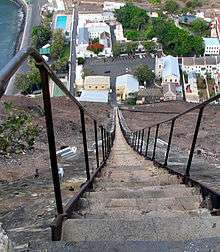 The town is built on igneous rock in the James Valley, sandwiched between steep cliffs. It is therefore rather long and thin. The walls of the valley are rough and steep, and rockfalls have been a problem, although now minimised by netting.[7] A small stream, the Run, runs through the valley.[8] The town is commonly divided into lower and upper parts, depending on the distance up James Valley. Being the island's main port (and with the Saint Helena Airport yet to be opened) the town is the only entrance to the island to visitors.[7] Despite not being connected to Jamestown proper by road, Rupert's Valley, the next valley north, is also part of the town. It houses much of the island's infrastructure, such as its power station and associated fuel storage, and a one-ship wharf was completed in June 2016.[9]

The town has over 100 listed buildings,[10] mostly from the Georgian era. Main Street has been described as "one of the best examples of unspoilt Georgian architecture anywhere in the world."[11] Many buildings are built out of local volcanic rock. St James' Church dates from 1772 and is the oldest Anglican church in the Southern Hemisphere.[12] Another of the town's prominent features is Jacob's Ladder, a staircase of 699 steps, built in 1829 to connect Jamestown to the former fort on Ladder Hill. The ladder is very popular with tourists, is lit at night and a timed run takes place there every year, with people coming from all over the world to take part.[13] The Museum of Saint Helena is situated in Jamestown, one of two museums on the island (the other being Longwood House).[7] 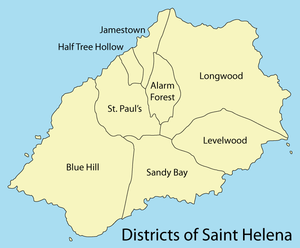 Map of the districts of the island

Jamestown is formally a city, a status granted by Queen Victoria in 1859, and its full name is the "City of James Town".[1] It is also one of the 8 districts (administrative divisions) and is the capital of both the island of Saint Helena and the British overseas territory of Saint Helena, Ascension and Tristan da Cunha. The Castle, one of the oldest buildings in the town, is one of the main government buildings.[7]

Jamestown features a tropical hot desert climate (Köppen climate classification: BWh)[14] with essentially consistent temperatures throughout the year. Despite the fact that the town has a desert climate, its temperatures are moderated by the adjacent ocean. As a result, it seldom gets very hot in Jamestown. The temperature in the Jamestown area is some 5 degrees warmer than the rest of the island, because of the difference in altitude. While Jamestown receives less than 5 inches (13 cm) of rainfall per year, the higher parts of the island are also wetter than the town, which lies on the drier coast and in a sheltered location. The highlands above Jamestown receive up to 39 inches (99 cm) inches per year of precipitation and are lush with vegetation. The surrounding waters can be quite rough at times, and there is a sea wall to protect the settlement.[15]

Jamestown from above in 1985

As of 2016, the town had of 629 residents,[16] a significant decline since the 2008 population of 714.[17] The town's population has been shrinking and it is no longer the largest settlement on the island, having been surpassed by Half Tree Hollow, Saint Paul's and Longwood.[16]

As a British colony, the island follows the British education system. There is one primary school, serving children ages four to eleven,[18] in Jamestown, Pilling Primary School, which was created by the amalgamation of Jamestown First School and Pilling Middle School in September 2007.[19] The island's only secondary school is Prince Andrew School in Saint Paul's.[20]

The Anglican Parish of St. James is one of the three parishes of the Diocese of St Helena on the island. St James' Church is the primary church in the parish and is the oldest Anglican Church in the southern hemisphere; the present building was put up in 1772. There are 3 daughter churches: St John's, in Upper Jamestown, St Mary's, the Briars, and St Michael's, in Rupert's Valley.[12] The sole Catholic Church in St Helena, Sacred Heart Church, is location in Jamestown,[21] as is a Baptist church.[22]